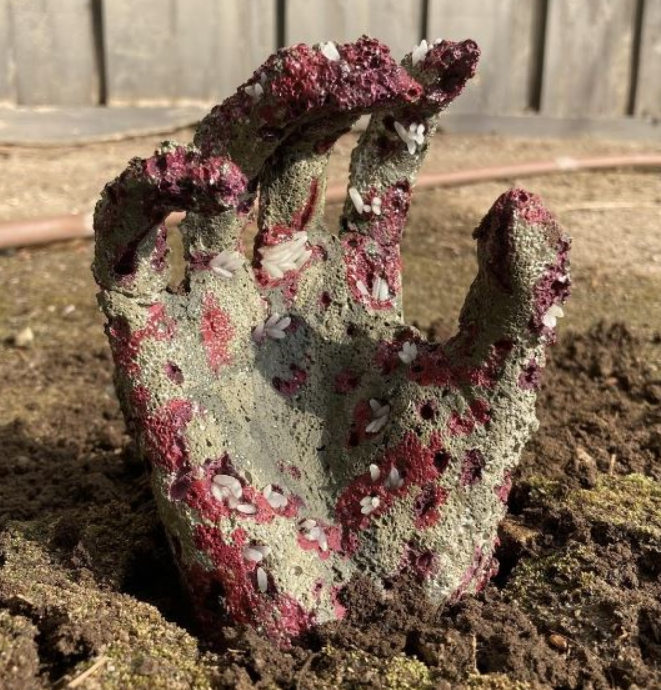 The hammers were modeled after real hammers using Smooth-On Flex Foam-It! 25 (a dense flexible foam) to create a prop that could be used to safely “bonk” someone over the head in a film or play.

In addition to the tool props, students made molds of their hands in Smooth-On Algi-Safe Alginate cast using Hydrocal Plaster.

Students used vacuum-formers to create molds of a prop arm which were then used with Smooth-On Flex Foam-It! 8 (a pillow-soft flexible foam) to create a prop severed arm for a film they imagined.

Students also studied the anatomy of the human ear and then sculpted one from observation in clay.
Click slideshow below for more photos

Senior Joseph Saada had never played the ukulele before he decided to sing and play as his talent for Mr. Fullerton. He had only practiced both separately for the weeks preceding the recording—he’d never actually sung and played at the same time until the event.

“Well to be honest with you, I was just cleaning out my garage and I found the ukulele, and was like ‘oh, well, I need a talent’ so I picked it up, asked around, found out it wasn’t that hard to actually play the ukulele,” said Saada, who was named this year’s Mr. Fullerton. “In a week I learned ‘Riptide’ because it’s an easy song.”

Highlights of the event included Garner’s comic sketch on how to make a peanut butter and jelly sandwich and Estrada’s skillful trumpet performance while wearing a mask. Students who are logged in to a school email account can still watch the video of the Mr. Fullerton show here: Mr. Fullerton

Seniors Zoey Afram and Ben Torres were crowned Homecoming Queen and Homecoming King at the halftime show on April 16.

Speech team continues competitive season
Competing against experienced juniors and seniors, freshmen Audrey Bae and Isaiah Jung had a strong 3-3 showing April 4-6 at the National Debate Coaches Association National Championship (NDCA) tournament. As freshmen, Bae and Jung could have competed at the novice level but chose to compete in what is equivalent to “varsity” level.