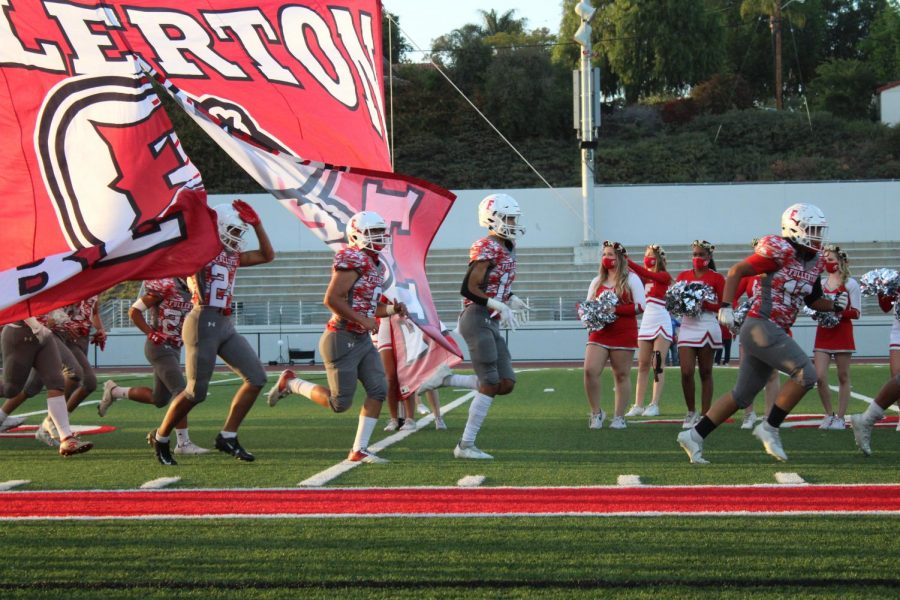 The FUHS football team ended their season with a 35-28 win against Sonora April 16. Photo by Alexandra Williams.

The football team (4-2, 3-2) defeated Sonora 35-28 in the homecoming game April 16 to finish their season. The score fluctuated for most of the game with both the Indians and Raiders holding leads. The final touchdown was on a throw from senior quarterback Dylan Neal to junior wide receiver Ty Dillon with 45 seconds left in the fourth quarter.

The FUHS boys basketball team was the first team to play in the new gymnasium April 16. The Indians fell to Servite 49-37. The team fell to La Habra 64-54 April 21 in their first league match-up. Junior Zane Mustafa and sophomore Christian Hubbard led the team with 15 and 11 points respectively.

The girls basketball team fell to La Habra 48-18 on April 21. The Indians will face the Coyotes April 23.

The boys soccer team (6-0) defeated La Habra 3-1 on April 22. Junior Misael Gonzalez scored the first goal of the game and went on to score the second on a penalty kick. Sophomore Kenneth Flores scored the final goal of the game and senior goalie Patrick Bulubenchi prevented the Highlanders from scoring more than once. The team will face Buena Park April 27 in a continuation of league play.

The FUHS girls tennis team (4-2-1) is looking to secure a place in the season playoffs. In their 5-4 win against Buena Park April 20, junior Eliza Lynch and sophomore Lillian Kelly won all their matches. The three doubles teams including Kennedy Hetts, Ami Ishikawa, Alex Felz, Alyson Jeong, Abby Lynch, and Emily Ma also won all their matches against Buena Park. The team tied with Troy April 22. The Indians will continue league play April 27 against Sunny Hills.

The girls volleyball team (3-1) will face Sonora (3-0) April 26. Seniors Vanessa Chavez and Samantha Martinez led the team to a 3-2 victory against Troy April 19. The Indians fell to Sunny Hills 3-0 April 22.

The FUHS baseball team (6-5, 1-1) defeated La Habra 5-3 on April 21. Sophomore George Papadatos hit a bases clearing double to put the Indians in the lead. Sophomore closing pitcher Niko Savage kept the Highlanders at 3 runs. The team had previously competed in the Newport Elks Tournament from April 8 to April 16. The highlight of the tournament was when the Indians beat Gahr High School, the No. 6 team in their division, 8-3.