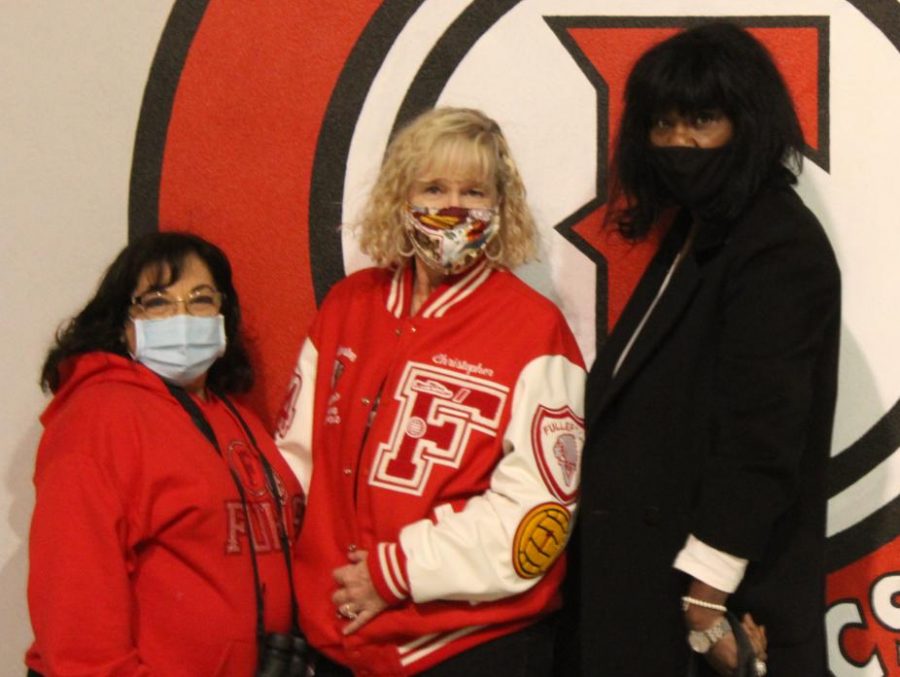 Freshman Simone Greene was struggling to focus on school work several weeks ago. She just couldn’t get motivated to work on her biology project. Then her mom’s friend Vicki Calhoun stopped by for a visit.

“I had to write about the different stages of mitosis, and Vicki sat down with me to help me through it,” Simone said. “She was super busy that day but she’s like, ‘Yeah, if you’re struggling with work I’ll just help you through it. It’s totally fine.’ She’s really caring like that.”

Calhoun, who was elected to serve on the FJUHSD school board in November, has made it her life’s work to help students like Simone. Whether it’s tutoring, giving a pep talk, or just listening to their problems, Vicki Calhoun connects with her community.

After graduating from Fullerton High School in 1982, Calhoun attended Fullerton College then transferred to San Diego State where she earned a B.A. in Psychology. She earned a Master’s in Guidance and Counseling from Loyola Marymount and a Doctorate in Education from the University of La Verne.

Simone says Dr. Calhoun will be a great school board member because she knows what it’s like to struggle.

“She was a C student when she was my age, but she worked really hard and got a doctorate,” Simone said. “You can tell how much she values education. She knows how difficult it can be to be good at school, so she tries to help in any way that she can.”

“She’s like this bright light, you know, always optimistic and excited for new things,” Simone added. “When she’s around, she never makes the conversation about her or her accomplishments. She’s just always there trying to help.”

Calhoun grew up in south Fullerton, a community with a sizable population of Blacks and Latinos. When she was in third grade, Calhoun and others in her neighborhood were bussed to Acacia Elementary School.

“Taking somebody out of what they are used to into something different was so difficult,” Calhoun said. “I had a hard time and I was the only African-American in my class so I was by myself. They would call me names and would yell at the bus. By the time November came around, they just accepted me but those couple months were hard.”

While attending a mostly white school, Calhoun learned about Black history through neighbors and friends.

“We went to church and I sang in the gospel choir. That’s where I learned about being an African American and all the people who have marched and fought for us like Martin Luther King and Rosa Parks,” she said.

Calhoun learned to embrace the cultures both at home and school.

“I got to learn about Rock & Roll at school but down here it was more like R&B and Oldies,” she said. “The first time I heard the Beatles was up there. I had a massive amount of music in my life which was really important to me.”

Those musical influences would lead her through a brief musical career with the Red Hot Chili Peppers before turning her attention to counseling troubled youth.

Calhoun traveled with the band to perform at several college campuses. Bass player Flea invited her to sing on Mother’s Milk (1989) after seeing Calhoun at a basketball game.

“I never thought a little girl from down here from the south side of Fullerton would ever be with the rock band,” she said. “I knew nothing about punk rock at all, but since I was a cheerleader and had crazy moves, Flea asked me to sing on the record, and that’s how that transpired.”

Calhoun says one memorable moment on tour was when she got sick on stage.

“I was in Canada at the Commodore Ballroom and I didn’t know I was allergic to pulpy orange juice,” she said. “I drank it and I threw up all over the stage. I go pleading, ‘I’m sick’ and Flea’s like ‘Get up there and keep rocking!’ and so that’s what I did. They babied me because I was straight out of college, but they took good care of me.”

Despite having fun as a singer, Calhoun found she was a life-long learner and gifted mentor for young people. She is truly passionate about serving her community as a school board member.

“I want to be there to give them any resources or anything I can do to build them up and I’m there to be a voice,” she said. “Down here in south Fullerton, we didn’t have someone representing some of the kids. Andy Montoya and I were the first to represent the area. I’m the first African-American, and he was the first Latino.”

Montoya, who served as school board president last year, is a math teacher at Ladera Vista Junior High. He’s known Dr. Calhoun for about 10 years.

“When she decided to run for a seat on the FJUHSD Board, I was happy and grateful that the seat would go to someone with passion for the students of the district,” Montoya said. “She has always been a great voice for our community and Orange County and brings a needed voice to our Board.”

She’s good at what she does because Calhoun knows what it’s like to struggle as a student since it wasn’t always easy for her academically in school.

“I knew every tutor in the math and English department (at Fullerton College). I spent a lot of time building my skills up that I should’ve done earlier but I was too social to really take on the classes I needed,” she said. “So I spent a lot of time getting tutored, that’s why I know what their needs are. If they are where I was, I know how I can get them on a path.”

Not only that but it was also important for her to help families in giving them the information they need in order to help students succeed.

“[Students and families] don’t know what to do, how to do it, or where to do it, and that’s what has been my mantra: Get them information so they can move forward in careers to a four year degree,” said Calhoun, who has recently finished her book  Dr. V Red Hot Tips! which covers skills ranging from dressing in proper business attire to improving interviewing skills.

“I want them to know that they can do it, and I want to make sure that once I get more acclimated on the board that they’ll get flooded with more information at the schools to help them.”