THE TRIBE TRIBUNE • May 20, 2021 • https://tribetribune.com/10199/feature/battalion-commander-serves-with-strength-humility/ 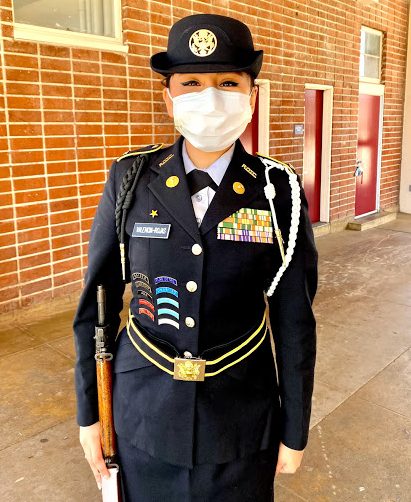 Senior Alejandra Valencia Rojas knows what it means to struggle. In fact, overcoming challenges is what has made her a strong yet compassionate JROTC Battalion Commander this year.
Alejandra says she’s found strength through her mom, who is a single parent. “My mom is very inspiring to me because she came from Mexico to the U.S. all by herself and then raised me and my sister all by herself,” she said.
Alejandra lived in Florida until eighth grade. She didn’t know anyone at Fullerton High School when she started, so she’s grateful she found her school “family” through JROTC.
“When we came to California halfway through my eighth grade year, there was a point when we were just homeless,” she said. “We went through a really tough time but we got back on our feet. I think JROTC really helped me as well to be resilient, to kind of just bounce back.”
Sophomore Julia Bustamante says Alejandra Valencia Rojas has a reassuring way of taking charge of JROTC cadets when they need guidance.
“Last year during a football game everything was chaotic,” Bustamante said. “Then Alejandra took charge, went over everyone’s parts and where they were supposed to be as a group and individually.”
Bustamante says she admires how Alejandra leads with compassion. “I like how she cares for people,” Bustamante said. “She taught me that the way you carry yourself dictates how people see you. The way you wear your uniform shows what kind of person you are.”

Alejandra says it’s sometimes tough to find the right balance between being a commander who demands discipline and being a high school student who wants to have fun.
“You know, they’re high schoolers. They don’t want to be told what to do, so you need a lot of patience,” she said. “They’re not used to being told what to do, but once you see them grow through the years, they understand we don’t just want to yell at them. We set leadership values and discipline so they become better people in general.”
Junior Executive Officer Kylee Gong says that Alejandra has been a perfect blend of leader and friend.
“I can say to her, ‘I get to look up to you, but I can also be super proud of you seeing how you’re leading me and the rest of our group’,” Gong said. “It’s been a really good mixture of a professional relationship with her and a really personal one as friends.”
Gong said that Alejandra was a strong Deputy Commanding Officer two years ago, helping freshmen learn basics like marching and prepping for uniform inspections.
“My freshman year, I was having such a hard time trying to figure out how to do my hair correctly,” Gong said. “Alejandra’s hair was always on point. It takes like 20 minutes to do your hair so for her to be so kind to do mine before her own showed her willingness to put others before herself. She showed me her character and I have always appreciated that about her.”
Alejandra said: “We have an inspection phase where we get scored on our uniform, our hair, everything and I’m very meticulous when it comes to those things. But sometimes girls don’t have access to certain things like hair ties, gel or hairspray so I bring my supplies and just share with everyone.”

Alejandra says she enjoyed setting up the impromptu salon in the corner of the JROTC room: “I think it is just a really nice bonding time before a competition and even to break the ice a little bit especially if they’re new to JROTC.”
Alejandra has served many roles, including the official photographer for JROTC and being selected as the first female Raider Team Commander.
The JROTC Raider Team is the group that competes in physical training contests with drills like flipping tires, climbing walls and running through mud.
“She knew exactly what she wanted from the team,” Gong said. “She had a very clear vision for them. I think her passion for that really showed our instructors, so they gave her the commander position.”
The battalion also earned Honor Unit with Distinction status after receiving a near perfect score during their formal inspection on April 15. But Alejandra refuses to take the credit.
“It was all Kylee [Gong] for us getting the 99.4% on our inspection,” Alejandra said. “She structured it perfectly and executed it well even with COVID and all the stress. I think it is remarkable that Kylee did the most for the inspection.”

Although Alejandra has earned a lot of respect in the JROTC program, she is humble and knows how to laugh at herself, including when she fainted her freshman year at the annual Veteran’s Day parade.
“You are not supposed to lock your knees because you’re going to be standing for hours but I locked my knees,” she said. “It was really hot that day so before the parade even started, I fainted. They dragged me out of the formation and the volunteers brought me water. They were nice about it even though it was really embarrassing, but it’s something that I can laugh about now.”