Whether math or music, Estrada is good fit for teaching 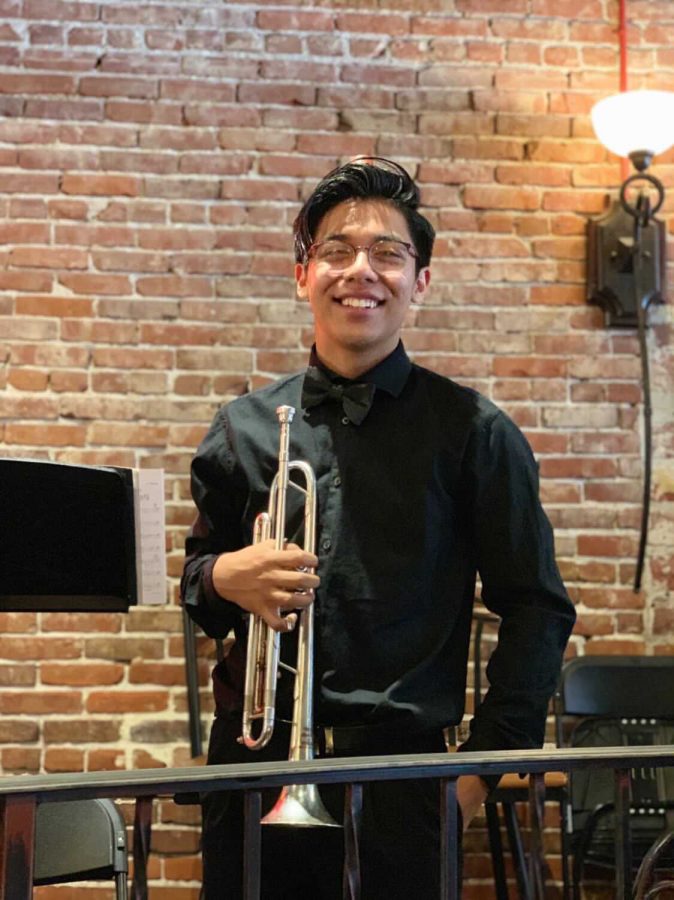 Estrada at a gig in Downtown Fullerton.

I remember my first day of Band Camp. Fresh out of junior high, I’m standing on the FUHS football field feeling lost. What’s the music going to look like? How long are the practices? How on earth do you march and play at the same time?
A voice interrupts my worrying.
“Hi, you must be Jameson. I’m LJ, I’ll help you with the basics.”
Back then Elistein “LJ” Estrada was only a sophomore, but his friendly smile and subtle confidence was a lifeline for newbies like myself.
The following year he earned the Drum Major spot, the highest leadership position in band, even though he was only a junior.
In class, he’s always friendly and encouraging with those who need help, willing to set aside seniority and help as a friend rather than an instructor. When working with LJ, it’s easy to forget you’re working with one of the most talented musicians on campus.
Estrada is part of the Jazz Ensemble and Concert Band. He was in Marching Band for three years and Winter Guard for two. He’s an officer in STEM Scholars, the campus’ STEM club, and Tri-M, the campus music honors society.
Estrada started playing music in 5th grade when his school offered morning practices.
“Initially I wanted to play drums but I didn’t want to buy a drum pad,” he said. “So I settled with trumpet.”

Estrada will major in mathematics in Cal State Fullerton with the goal of becoming a math teacher. He says he feels connected to math, as he does with music.
“I think freshman year when I started helping out my friends with math, I found it natural to teach people,” he said.
Estrada considered pursuing music education, but decided against it.
“It’s always been on my mind, but finding the time and money to do that is stupid hard,” he said. “There’s this myth that doing music or anything in the arts is easy, like if you go to school for it you’re just going to be having fun 24/7. But people fail to realize that there’s a lot of time you need to put in not just for practicing but also for learning. If you want to be a music educator at the high school or middle school level you not only have to be a professional at your main instrument but you also need to be proficient in every other instrument that’s going to be in your ensemble. That’s just a lot of time and effort. I hope I continue with math, but whatever happens I’ll be content with whatever decision I make.”
Estrada plays with multiple bands outside of school.
“I’m part of this band called Apollo Descendant with some old band members from Fullerton,” Estrada said. “We gigged for about a year before the pandemic. We played at the Saint Mary’s Church, a wedding. We’ve played at the Night Owl and lots of other bars in downtown Fullerton. I’m also a part of a band called The Girlies where I play bass. It’s me and a couple old friends. We just get together and play. I haven’t really played bass before, but I needed something else other than trumpet. It was a nice change of pace.”
Estrada says life under the pandemic has hurt his love for music.
“I think—and I know a lot of people have been hit hard in terms of motivation—when it comes to artists, musicians, dancers, we’ve lost that sense of motivation to do much. It hit me hard in the summer when I was practicing. I asked myself what I was practicing for. There’s no reason to keep playing if I’m not going to play anywhere. The longest I went without playing was a month out of the last three years because I was so defeated. Of course we lost gigs but I saw that coming. I had to accept that. I’ve done virtual bands like Lucky Chops and Brass University but those are big projects where you see me for half a second. Playing with people is what I enjoy most. I thrive off of social interaction. It hit me pretty hard. I’ve learned to cope with it the last several months, but it’s been rough.”
Despite a tough senior year for the arts, Estrada is hopeful for the future.
“Cal State Fullerton has a lot of stuff. Pep band, university band which accepts everyone. They have a lot of ensembles where I may want to audition into,” he said. “I have my other two bands which will come together as soon as we can.”

Estrada describes one of his favorite memories from his time in the FUHS Marching Band.

“We were at our first football game my freshman year. The stadium was under construction, so we didn’t have a football game until very late in the season. I just remember being stupendously nervous. I don’t know why I was so nervous because a lot of the time people don’t pay attention to the halftime shows, but it was bad for me. Our show was called Dreams, and we had one section where we had a trumpet solo. We all come together, we’re front and center so I can’t hide here. We walk together and we have this big, big moment for the trumpets and I just hear the crowd roaring. That was the moment I realized I liked this. I realized I wanted to stick with this because that was crazy to me that people would cheer for us.”
Instrumental music director Troy Trimble is proud of Estrada’s successes in the arts.
“He’s a strong leader through the relationships he’s built with students,” he said. “He has a desire to do what’s best for his school, his program, his peers, and himself. He has a desire and passion for music, and he understands what music means to him.”
For the past two years, Estrada has performed Taps during the school’s 9/11 ceremony.
“That’s just something he’s done on his own without me needing to light a fire under him,” Trimble said. “He’s represented our school and program well. What he does is really important and it shows well for him.