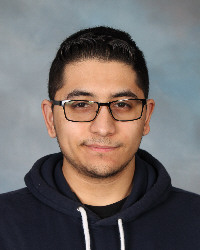 Senior Jonathan Ugarte will go to Fullerton College and major in Criminal Justice.

Senior Jonathan Ugarte has been an active member of Fullerton’s choral program ever since he was a freshman, participating in Men’s Chorus, Men’s Ensemble, and Vocal Ensemble throughout the years.

However, he might not have discovered his passion for music and singing if it wasn’t for a middle school scheduling mishap.

“I actually joined choir by accident when I was in middle school, thinking it was another class. But going into it I really liked it a lot. I made a lot of friends and it helped my personality, really. If it wasn’t for choir I probably wouldn’t be the person I am today.”

Ugarte also played football his freshman year, but he found choir to be a better fit.

“I ended up talking with some of the choir guys while I was in football, and I just loved the atmosphere,” he said. “I loved how I could connect with so many of them, and I was just like ‘yes, this is it’.”

Ugarte was right to trust his instincts. He now graduates with fond memories of choir.

“I remember a day when we were done with a concert and we were just chilling in the choir room,” he said. “All the seniors and all of Men’s Chorus were relaxing while one of our friends was playing ‘All of Me’ by John Legend. We were all singing and dancing and being complete goofballs. I loved it.”

Ugarte said that choir has not only helped him improve his social, vocal, and music theory skills, but taking part in formal events like concerts has improved his professional and leadership abilities as well.

“A lot of professionalism really kicks in during the concerts because when you’re in the audience, you’re just sitting there like ‘oh wow, this is so amazing,’ but when you’re actually doing it and you’re learning how to get on stage, get off stage in an orderly fashion, it’s a complete change of mindset, it’s just ‘okay, I need to get this right,’” Ugarte said. “Yeah, sure, some freshmen or sophomores aren’t really taking it as seriously, but that’s what the upperclassmen are there for and that’s when the leadership kicks in, saying, ‘hey guys, we need to be quiet because these walls, they transfer sound very well because it’s a very old building.’”

Outside of choir, Ugarte has several hobbies including playing Dungeons & Dragons and boxing, which his uncle introduced him to.

“The funny story behind it was I was just sitting on a computer one day watching YouTube when I was in sixth grade, and my uncle came up to me out of nowhere and was just like do you want to do boxing? And I said sure. I was really nervous at first because I thought I was going to get punched or kicked in the face or something but it wasn’t like that at all. It was a lot of working out but I actually enjoyed it. Just punching the punching bag and learning combos and understanding how your body moves, it’s really interesting.”

Ugarte will attend Fullerton College and hopes to major in Criminal Justice, though he still intends to keep music in his life, including incorporating choir in his schedule.

“There’s no way I could get away from it. If I even tried to, I would basically just be betraying who I am, I couldn’t do that to myself, leave something I love.”