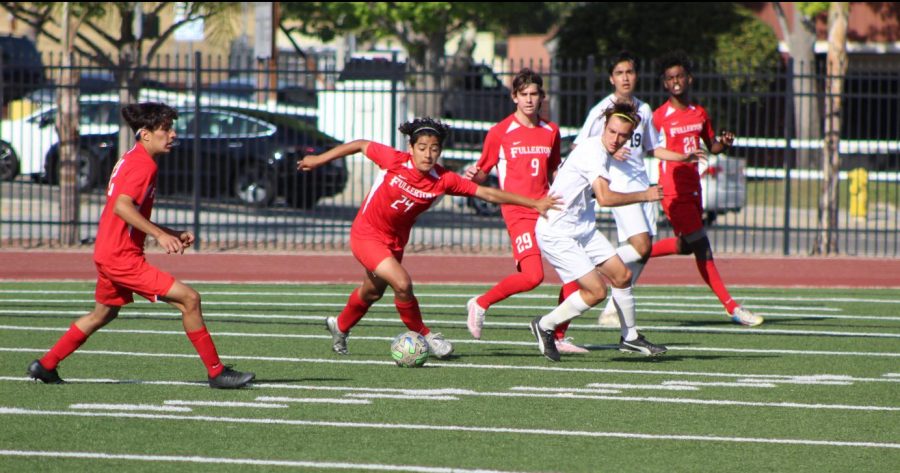 In the second round on May 15, the Indians had a 3-1 win against Foothill. Andrew Macias scored twice and Kenneth Flores scored one goal in the win.

The team ended its strong season with a 2-0 loss against Santiago High School in Corona on May 19.

In their first round of CIF, the Indians defeated Garden Grove High School 11-7, but the team lost a close 10-8 match against Wilson High School on May 14.

The baseball team (14-11, 9-6) placed third in the Freeway League and will begin its CIF Division 4 playoffs the first week of June.

Many of the players stood out with great stats this season. Sophomore catcher Nate Norman, with 72 at bats, had 24 hits, 3 home runs, and 26 RBI, finishing off the season with a .417 on base percentage, a .611 slugging percentage, rounding his batting average to a .333. Junior Sebastian Fany was the team’s batting average leader at .365. Junior Matt Kim led the team in walks, drawing a .487 on base percentage.

Senior Bryce Mays’s two-run double in the 6th inning clinched the 7-3 win against Sonora on May 21, which helped the team break the two-game losing streak against the Raiders.

The boys basketball team (8-10, 5-5) had a strong season but came up just short of a CIF playoff berth. CIF usually slates 32 teams for the playoffs but chose 30 teams this year. The Indians likely came up short by one game.

The Indians defeated Buena Park in overtime on May 12. Junior Zane Mustafa scored two free throws in the final minutes and led the team in scoring with 28 points. In the final seconds of overtime, the score was tied with one second left when Mustafa was fouled underneath the basket. He sank two free throws for the win.

On May 17 the Indians defeated Sunny Hills but ultimately fell to Sonora 56-49 on May 19.

The boys varsity track team finished second at the Freeway League Finals May 19. Senior Christian Perez led Fullerton by winning the 110HH, 300 intermediate hurdles, running a leg on the winning 4×400 team, and running a leg on the 4×100 team. Senior Caleb Garner won the 400m and placed second in the 200m. Junior Matthew Abernathy finished second in the 400m with a personal best of 53.57.

Senior Cyrus Burton finished with a personal best in the 1600m with a 4:50.38. Junior Nick Arnold placed third in the 200m and fourth in 100m but his performance of the day came when he anchored the 4×400 with a 51.6 split. Heading into the last leg of the relay, Nick patiently waited until halfway through the lap to throw in a hard surge and pass both Sunny Hills and Troy. The split was nearly a 4 second personal best.

The girls varsity track team finished fourth at the Freeway League Finals. Senior Ali Williams won the 400m with a season best time of 1:04.21 and ran a strong leg on the third place 4×400 team. Freshmen Ciara Campos and Lana Flynn ran legs on the runner-up 4×100 team and placed fourth and fifth in both the 100m and 200m. Ciara also placed sixth in the high jump to score another point for the team. Newcomer Sophomore Layla Thornton placed third in the discus throw and also scored points in the shot put with her fourth place finish.

On May 11, in the second All League track, junior Mattew Abernathy won the 400 in 53.93 and lowered his personal best in the 800 with a 2:07. Freshman Lana Flynn placed third and freshman Ciara Campos fifth in the varsity 200m.

The track team also competed on May 4 in the first all-school track meet. Both the boys and girls teams ended up in fourth place in the team competitions. Senior Caleb Garner took the 400-meter race easily with a time of 51 seconds. Freshman Morgan McAndrew won the 3200-meter race handily as well.

The girls volleyball team defeated Sunny Hills 3-1 in an exciting match on May 10, but the Indians lost to Sonora on May 11. The girls team ended up with a 5-5 league record which normally would be strong enough for a CIF berth. However, because the season got a late start due to COVID restrictions, CIF did not host volleyball playoffs this year.