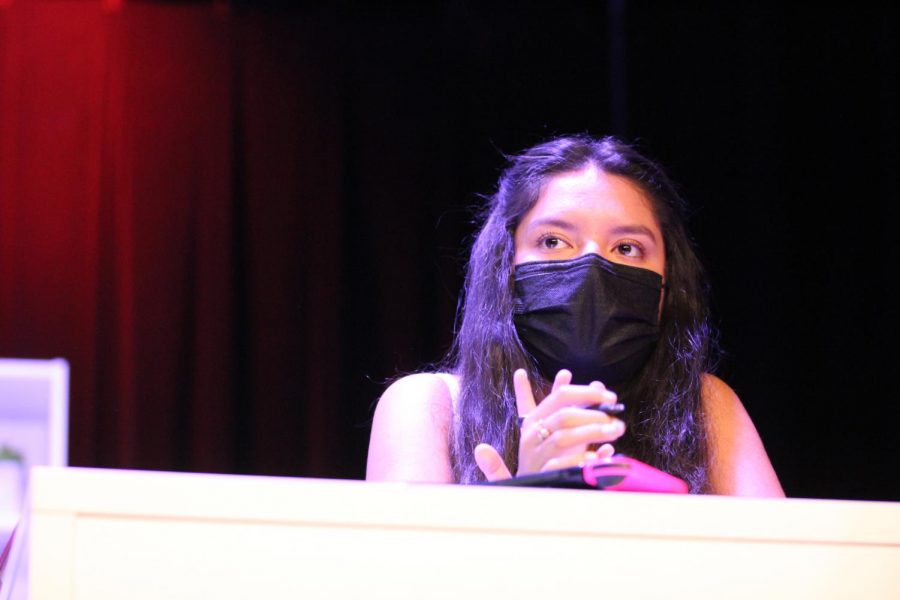 Junior Delilah Flores, along with the entire Theatre Production class, is ready to stage the show Same Room, Different Story after 18 months of Zoom theater.

After 19 months of Zoom performances, the FUHS Theater Department is back with its first live production Same Room, Different Story. Actors will be telling not just one, but eight stories next week in the Little Theater.

“There are lots of different stories, from someone who is dealing with death to someone who is dealing with the struggles of what’s going on between their parents,” theater teacher Michael Despars said. “There are other people who are telling their crush that they like them and then have to deal with the aftermath of that. It’s a mix of different things that I think teenagers really go through.”

Despars hopes to create a show for everyone; he wants to bring back the joy of live theater not just for students but for everyone who has been home due to COVID.

“This is our first live production in person in two years,” said Despars, who has brought together 29 actors from his Theater Production class for the show. “I really hope that we all start looking for opportunities to support the different groups on campus in whatever they’re working on right now.”

The play is a collection of eight scenes ranging from love, to death, to the periodic table; however, each director cleverly uses the same set to tell a different story.

Jacobson is the student director for the show’s final scene “Quiz.”

“The premise is that this person named Ellis is stressed about the quiz tomorrow. I mean, we’ve all been through that, right?” Jacobson explains. “What’s unique about this scene is that it’s not just her, but I’ve casted other people to represent different aspects of herself.”

As a senior, this is Jacobson’s last year in the FUHS theater program. He says that COVID prevented him from doing live theater his junior year. “Now, the theater really feels alive again,” Jacobson said. “That feeling and emotion—I feel like this is such a great chance for people to actually feel that. To really feel human connection through a stage instead of just being glued to your screens watching Netflix or Hulu all day.”

Sophomore Connor Udhus agrees that the audience will be able to connect emotionally with the show. Udhus is an actor in the scene “Packing” which deals with leaving your family behind. The scene starts as an innocent game of hide and seek but reveals that someone the protagonist loves is running away from home.

“This is a show I think people can watch and really see themselves in, and I think it’s important to be able to relate to the things you see in the media,” Udhus says. “I have this constant urge to just go. I want to explore. I can’t really take the monotony, and I feel that in my character as well.”

Although it’s great to be performing, Udhus said it’s been a challenge for actors to be  expressive and project their voices while wearing masks.

“It’s been different, trying to act without being able to use half of your face, but it’s better than Zoom,” Udhus said. “Mr. Despars always tells us that we can’t let a piece of fabric ruin our passion, and I really agree with that.”

Despars says that while live theater is finally making its return, it does come with a price. Strict COVID protocols will be in place for the show. Both actors and audience members must be masked for the duration of the performance. Audience members can choose their own seats. About 100 seats in the 168-seat theater will be sold each performance to ensure that social distancing is possible.

“Masking will be enforced while you’re in the space, and the bottom line is that if you’re not feeling well, you should not be going to a theater,” Despars said.