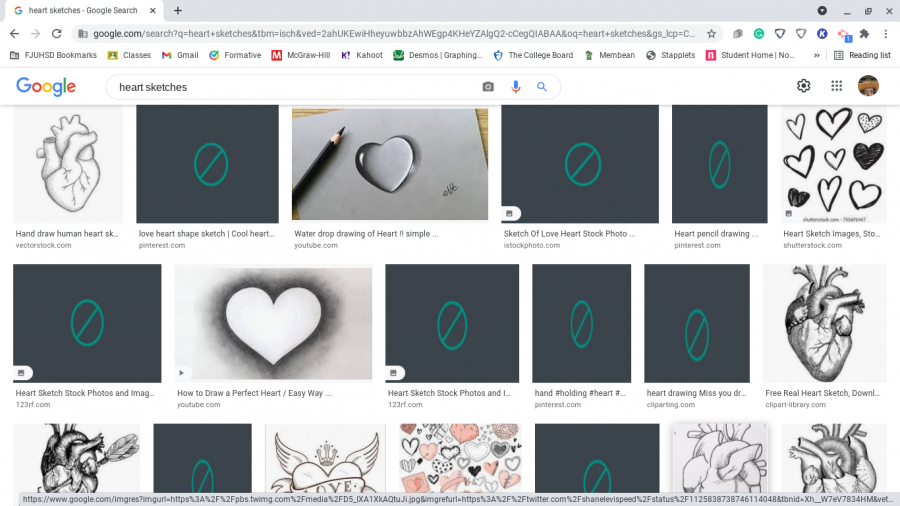 Innocent searches such as heart sketches are full of blocked images on student chromebooks.

Senior Miriam Chappell needed a good image of special effects artist Phil Tippett’s work for her BADE class. Using her Chromebook she searched for Phil Tippett’s stop motion film Mad God. Instead of seeing gifs of Tippett in action, she found most images were blocked.

“Part of the requirement [for the project] was that you include gifs or images of the work they’ve done,” Chappell said. “I was looking up images and I could barely find anything because of how many images are blocked on our Chromebooks.”

Chappell is right. There are more blocked images on student Chromebooks this year. But what has become an inconvenience to students is actually a necessary increase in security.

The U.S. Senate passed a law requiring the Department of Homeland Security, specifically the Cybersecurity and Infrastructure Security Agency, crack down on ransomware attacks and threats against educational institutions.

According to Government Computer News, nearly 6 million schools have been hit by ransomware attacks in the last two months. The pandemic opened up opportunities for hackers to shut down distance learning at every level from elementary to college. The cyber terrorists lock out district technology personnel until the schools pay ransoms as high as $500,000.

The Fullerton district’s security upgrade included switching the content filter from Contentkeeper to Lightspeed over the summer, a change that triggered an increase in website and image blocking.

The previous Contentkeeper filter was housed at the district office. One concern was that if the district system crashed all student Chromebooks would be immediately vulnerable to cybercriminal activity.

According to the school district’s technology director Weston Baughn, the new system by Lightspeed is a cloud-based filter, making it less vulnerable to crashing and hacking.

“With everything going online during COVID that caused a little bit of a problem so we decided we wanted something that was more cloud based,” Baughn said.

Baughn says the district also is tightening cybersecurity to protect student data like phone numbers, addresses, and medical information from cybercriminals. Baughn says students must protect their passwords and change them regularly.

“If it’s your birthday, change it, don’t give that out,” Baughn said. “Don’t trust anybody with your password.”

Although students can understand the need for cyber safety, they’re still frustrated.

“There’s a lot of good informational content that you just plain can’t access and so the censorship just seems so illogical and inconsistent with what they block versus what they don’t,” Chappell said.

Baughn sympathizes with students but says he’s not sitting at his computer censoring Google images. Instead, the filtering system blocks several websites, including some entertainment sites. If the photo originates from one of the blocked websites, then the image is blocked during the Google images search.

Content filter companies like Lightspeed use a rating system to determine student access to websites. However, the district has the ability to reassign ratings as they see fit.

FUHS computer technician Art Gamboa says that Lightspeed is still new and it will need some tweaking before students can go back to the access they enjoyed with ContentKeeper.

“Contentkeeper was the same way [as Lightspeed] but little by little [the district] opened it up as they saw the need for different websites or content to be opened up and this is where they are at right now,” Gamboa said.

At the beginning of the school year, the Lightspeed filter blocked Wikipedia, but the district honored teacher requests to unblock the site. Some images are still blocked on Wikipedia, however, because Lightspeed won’t display Wikipedia images that originate from blocked websites. In other words, if a Wikipedia page uses an image from pinterest.com, students will not be able to see the image because Lightspeed blocks Pinterest.

Students who need access to a website for educational purposes should ask a teacher to send a request to the district to unblock the site. It might take a few days to be processed, but the district grants most requests.
Click on Slideshow to view more Photos