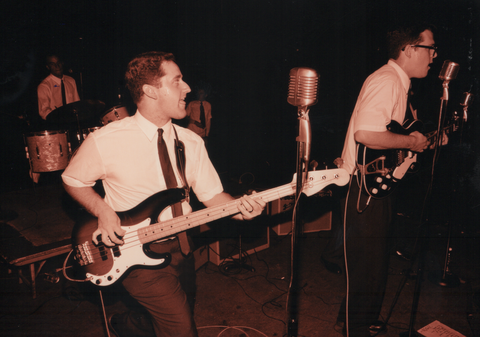 Orr played bass with his band Thee Spivies in 1996. The Tribe Tribune asked Mr. Orr, “If you could listen to only five songs today, what would they be?” Here is his Tribe Track List: 1. Right On, Frankenstein by Death From Above 1979 2. Cicada by La Luz 3. Elephant by Tame Impala 4. Sunflower by Vampire Weekend 5. Stay with Me by Faces

Walk into social studies teacher Robert Orr’s classroom and you’ll notice his lectern decorated with stickers ranging from KROQ to The Pixies and stickers for Sub Pop and Polyvinyl record labels. You’ll also see two speakers mounted on both sides of his whiteboard.

In other words, Mr. Orr is the music guy.

Orr plays standup bass, acoustic guitar and bass guitar. He’s been in several bands including his current group called the Blackball Bandits. Although he no longer travels with his band due to COVID, Orr has a following of fans who enjoy the Blackball Bandits’ music which can be sampled and purchased through Bandcamp. You can hear snippets of from their latest album, The Cursed Island, on YouTube. We recommend the Halloween inspired “Glowin’ Skeletons“ with its spooky surf vibes. The track can be purchased for $1 through Bandcamp.

To learn more about his love for music, the Tribe Tribune sat down with Mr. Orr for a one-on-one interview. We discussed his music tastes over the years, his experiences as a musician, and the higher meaning of music itself. We also surveyed Mr. Orr’s students about their listening habits. Some of their playlists are posted at the bottom of the interview.

Tribune: What’s a genre you’ve wanted to get into, but never had the time to explore and why?

Orr: As a musician, I’ve gotten to play in a lot of bands. As a bass player, I probably should get into more jazz and I’m not as much, cause I’m into punk rock and rock ‘n’ roll. When I do play in jazz, I like it, but they kind of look at me weird sometimes.

Tribune: What’s an underrated artist you truly believe have something special to their sound and deserve far more exposure than they do now?

Orr: A band that I think is not as big as probably should be here in America is a band called Royal Blood. They’re from the U.K. and I think they deserve more recognition than they get. They’re huge in the U.K., but they’re not as big in the U.S. as I think they should. It’s two guys. They’re kind of like the band Death from Above 1979.

Tribune: Your band, The Blackball Bandits, how would you describe their sound?

Tribune: On a scale from one-to-ten, how dedicated are you to the band?

Orr: Ten. I’ve always liked surf Music. I used to be in a country band and that ended and I  wanted to get into music where I can be kind of loud. I was over singers. It’s gonna sound bad, but I was done with dealing with singers because they’d be like divas at times. I was interested in playing in a band that was just the music, no vocals.

Instrumental surf Music is very powerful, but it’s usually just old guys in Hawaiian shirts at car shows, that kind of stuff. We were all relatively younger. I was the oldest person by far and they were all in their late 20’s and early 30’s so we seemed younger and we were playing a little bit punkier, a bit more punk than the other surf bands. I like to bring more of an edge because the lead guitarist was actually in a seven-string, drop-d metal band in France. So going in from that kind of vibe from his metal background, I like that a lot because I have a metal background, but surf music and California are very synonymous. I love it. We’re on hiatus because he’s back in France with his family, but he’ll be back.

Tribune: Do you plan to take the sound further and explore new musical territory? Or do you feel like staying in the same lane is the best path?

Orr: Do more. I’d love to do stuff with more electronics, synth-based stuff. I’ve got a guy that’s a really good drummer and producer. I’m gonna approach him about doing some drum and bass kind of stuff. I’d love to work with him. He’s got a little home studio. The problem is I love playing live, so he’d probably be on drums and me on bass, but there’d also be all the samples and stuff.

Tribune: What are some artists from the beginning of your musical journey that best define your taste at the time?

Orr: I’d probably take it back to my dad listening to Johnny Cash records. I’ve been enjoying music my entire life, but growing up when I did, two artists definitely stick out. First is Michael Jackson. In the 1980s, everybody knew who Michael Jackson was. I remember when I was a kid, the videos for “Thriller” and “Beat It.” 1980s Michael Jackson was so cool.

The second one is Van Halen, by far. So, junior high me liked those two things. By high school, I was getting into heavy metal. I was getting into Ozzy [Osbourne] and Metallica and all those bands like you know all the hair bands of the day. I was into Mötley Crüe, Scorpions, Def Leppard, Quiet Riot and Judas Priest, I like those guys a lot. I’m a metalhead from back in the day, but I liked hip hop, old school hip hop like N.W.A.

Tribune: What other phases has your taste transitioned from and to?

Orr: After high school, I got more into alternative and punk. In college I was into Nirvana, Jane’s Addiction, The Screaming Trees, Weezer, Smashing Pumpkins, The Pixies, Green Day, and those kinds of things in the early 90s. I really like X a lot and Sonic Youth was a really big influence on me. Thankfully, I also saw most of those bands live, too. I really didn’t get into the Ramones until later because I was more into L.A. Black Flag, The Germs, those kinds of bands I came into a little later in college.

Tribune: Do you have any friends who share this affinity for music and how does their taste differ from yours?

Orr: My friends from high school liked the really scary death and doom metal, like Napalm Death and that kind of stuff. I didn’t like those bands. They were a little bit scary. My friends were really into The Misfits, The Cramps and those kinds of bands. I didn’t really like horror punk. It was kind of weird to me. I liked the punkabilly vibe, especially of The Cramps.

Tribune: Did you ever have a point where an artist or band you loved started to become less appealing to you, but you didn’t want to lose that spark?

Also bands like Limp Bizkit and those bands. I don’t really like those. I kind of did at the beginning, but I don’t like the bro attitude and the misogyny. I don’t like how they talk about women. That’s no bueno.

Tribune: What do you think is the appeal of music?

Orr: Music is something that is in our soul. Every culture has music and music can go beyond language, beyond anything. It’s so emotional. It can make us feel. It can make us change our mood. It can make us be all up or down or really up and it can do so many things and it’s just notes arranged in a certain way. It’s magical.

TRIBE TRACKS: WHAT’S ON YOUR LIST?
The Tribe Tribune asked social studies teacher Robert Orr’s students, “If you could listen to only five songs today, what would they be?” Here are the student Tribe Track Lists and entertainment editor Zach Holden’s picks:
Click on slideshow below to view student playlists.