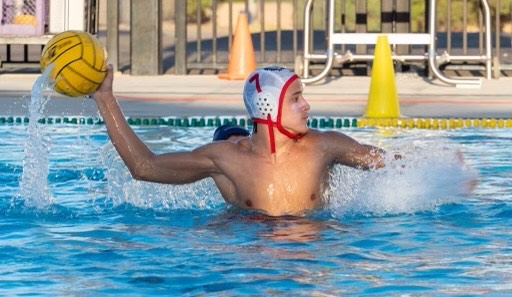 Senior Elijah Pelton takes a shot during a game against Sonora Raiders.The team played on Sept.22 and won 21-12.

The Indians took a 16-11 win against Buena Park on Oct. 6. This week, the boys hope to continue their winning streak when they travel to Troy at 3 p.m. on Oct. 13.
Football
The Fullerton football team (1-6, 0-2) and Buena Park (0-7, 0-2) are tied for last place in the Freeway League. The teams will battle for fifth place on Oct. 15 in the Indians’ Homecoming Game. Fullerton, averaging 17.7 points per game, has an edge over Buena Park who’s averaging just 6.5 points per game.

In the Sonora game, sophomore Aidan Zavala had 9 tackles and Sonora had a 61-yard touchdown from junior Josiah Binggeli. The score fluctuated as both Indians and Raiders were holding leads. The final touchdown was on a throw from junior Raider Pedro Moreno.

At the Sunny Hills Invitational, the boys cross country team finished 15th out of 29 teams and the girls team finished 27th overall.

The team will travel to Oak Canyon Park in Silverado on Oct. 15 for the O.C. Championships. The Indians will run against all five of the other qualifying teams.

The team is not worried. The Indians have consistently been posting top 10 scores including senior Mathew Abernathy and junior Troy Fernandes who recorded personal bests at the 40th Annual Woodbridge Cross Country Classic.

The team will play Freeway League point leaders Troy (16-3, 8-0) at home on Monday. Currently tied for fourth place, Fullerton must win the match for a chance to compete in league playoffs.
Golf
The girls golf team lost it’s most recent match against La Habra with a total score of 241 on Oct. 5. Senior Taylor Frank holds the record score of 39 for the season so far from their first match against La Habra. The team plays Troy next Tuesday with the hope of scoring a win.