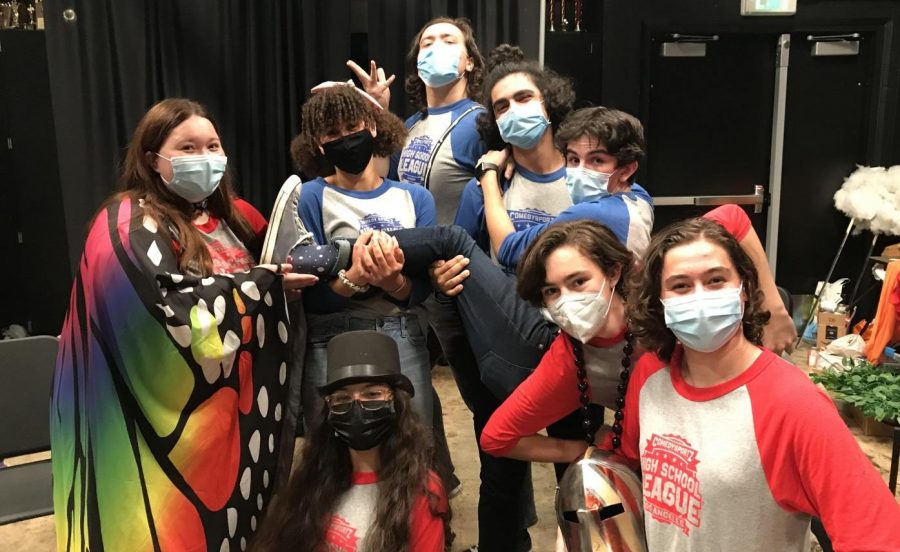 The FUHS ComedySportz team will play host to La Habra High School’s comedy improv team on Nov. 18 at 7 p.m. in the Little Theater. Tickets are $7 and can be purchased online or at the door. Audience members must wear masks in the theater and lobby at all times.

Students from both schools will compete in a series of improv games, trying to make the audience laugh and earn the most points. Several games require audience suggestions to get the improv scenes moving.

ComedySportz vice president Marco LaRosa says it’s great to be doing live performances again. LaRosa struggled to adapt shows to Zoom last year. It’s a tough task to perform a comedic, interactive show dependent on other people when you can’t be with them in real time.

“It’s like watching a sitcom without a laugh track,” LaRosa said. “You’re getting nothing from your audience, and you sort of depend on that to keep the show going.”

The ComedySportz players saw their first live audience in over a year on Oct. 22 when they hosted a match against the team from La Costa Canyon High School. The Halloween themed show featured Donny Cannady, Tari Cuevas, Zach Holden, Sarah Kelekoma, Ian Klatzker and Nolan Shirk. The Indians prevailed against the Mavericks although it was ultimately the audience who were winners by seeing the live event.

LaRosa said, “As soon as I got off stage, the first thing I said to our referee Phil was, ‘I missed this so much.’ I missed that feeling of being on stage and being able to perform and make people laugh.”

Now that ComedySportz is back, the team has expanded, including 22 new players who auditioned for the first time this year.

Instead of choosing a dry topic for her Informative speech, junior Amelie Heying will delight judges with her expository speech about British satirist John Oliver this weekend. The speech earned her a third place award on Oct. 16 at the San Gabrielino competition where she was invited to perform live for the first time since spring 2020.

Heying and other speech and debate students will compete in the Orange County Speech League Fall event on Nov. 13-14. The online competition uses the National Speech and Debate Association Campus as its portal instead of Zoom.

According to speech teacher Tarin Almstedt, NSDA Campus is more secure than Zoom.

“The portal limits the number of people in each [breakout] room. There’s no video recording, and students are given a direct link to join,” Almstedt said.

A group of mostly underclassmen will represent Fullerton at the event. Freshmen Nathan A. Medina and Nathan H. Medina will perform their humorous duo about two writers trying to raise money for their show about the history of the universe. (Yes, they’re both freshmen and they’re both named Nathan Medina.)

Junior Leo Perez will compete in Dramatic Interpretation and seniors Kennedy Hetts and Maggie Kelly will perform their duo piece about a straight girl being set up on a blind date, only to discover her date is a woman. The performance depicts their journey to becoming good friends after a rocky start.

While most students had the day off on Thursday, JROTC cadets marched in the Veterans’ Day parade from Wilshire to Hillcrest Park to honor military veterans. The event was also part of a districtwide JROTC competition.

The FUHS Cybersecurity team finished in the top 25% in October for the first round of competition, qualifying for the second round which will be hosted Nov. 12-14.

Seniors Hannah Ramos and James Salgado, juniors Michelle Alcibar and Fatima Alvarez and sophomore Aiden Hurt are scheduled to compete in a postal match on Nov. 12. The team will shoot for score in the FUHS Range and will mail their targets to be scored alongside the other competing schools. Precision air rifle participants fire small lead pellets in three positions (prone, standing, kneeling) at their home ranges—using one target for each position.

The Key Club is heading to Six Flags Magic Mountain for the Fall Rally South spirit event on Saturday, Nov. 13.

FRS is a spirit competition between all divisions. Divisions will go head to head cheering spirit chants. The competition will consist of 3 rounds, judges will determine which division was the loudest and most united then be sent to the next round.

In order to attend FRS, members were required to attend one of the spirit nights hosted at Smith Murphy Park in addition to the mandatory meeting held on Nov. 11 at Gardner Park. FUHS Key Club is a part of the 30 North division. The 30 North division will meet at SHHS for bus departure to Six Flags at 6:30 a.m.

Fullerton High School has not sent any students to the FRS spirit event in five years. This year, FUHS Key Club will be sending 30 members. With every ticket purchase, a portion is donated to the Pediatric Trauma Program in coordination with the Cal-Nev-Ha Children’s Fund charity.
Click slideshow below for Halloween photos