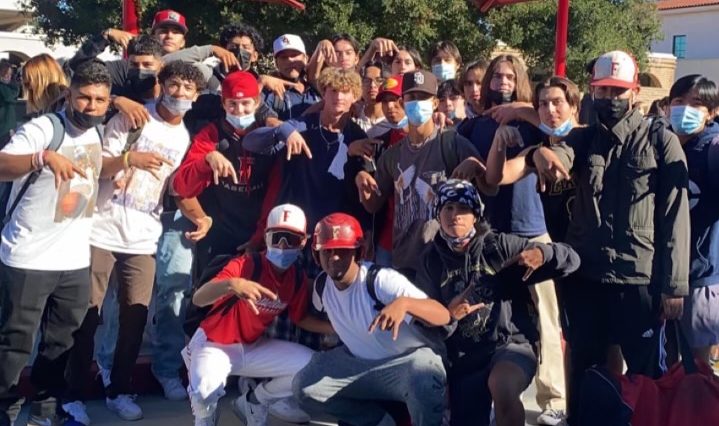 The FUHS baseball team has implemented a kangaroo court for discipline issues. A good team is held together by discipline and respect.

Hats off to baseball coach Sean Hill. When he found that demanding extra push-ups and running more laps were ineffective punishments for his players, he adopted a baseball kangaroo court. Hill acts as the judge, the senior players are the jury, while the rest of the team observes. Hill presents the “charge,” the defendant pleads his case, witnesses can testify, then the jury deliberates for one minute.

When senior Moses De La Cruz forgot his hat, the jury sentenced him to wear a baseball helmet during the school day. When senior Andrew Violet forgot his uniform belt, he had to wear his homecoming dance attire to school. Freshman Jack Norman had to sing a song in front of all of the baseball players after he and Zachary Fany got in trouble over a locked gate.

The punishments are embarrassing but nothing too traumatic.

Seniors were grateful for the help they received on College Application and Success Day on Oct. 13. Seniors were able to choose from a wide range of workshops that offered help in completing the FAFSA to help in essay/PIQ writing. However, the same day underclassmen took the PSAT. The exam was good practice, but school officials should have carved out more break time and should have allowed students to read a book or magazine if they finished early.

ASB worked hard setting up and decorating the homecoming dance on Oct. 16. Kudos to ASB for getting about 700 students to attend! However, with so many students, the line for photos was an exhausting 45-minute wait and the organizers ran out of water before the end of the night. The music received mixed reviews. According to organizers, ASB contracts with a company for the DJ, but ASB does not choose a specific DJ for the event. It would be great if they could find a way to work with a company that allows ASB more say in the playlist next time.

Red Ribbon Week this year seemed like nothing more than an average spirit week. Usually, statistics of drug abuse among teens are shared during the announcements but that didn’t happen. Handing out a bracelet with the message “Drug Use is Life Abuse” is not enough. Within 30 seconds, our reporters were able to find a few shocking statistics: drug use among 8th graders increased 61% between 2016 and 2020; by 12th grade, 62% of teenagers have abused alcohol; 50% of teenagers have misused a drug at least once. This would have been useful information to give to the student body during Red Ribbon Week.

No more baby powder. The tradition of tossing baby powder into the air after every touchdown during football games to get cool pictures needs to stop. During the Red Out game against Sunny Hills, some students reported suffering asthma attacks and other irritations. The powder also left stains on some clothing. The photos (although super cool looking) are not worth it.

Kudos to CHOC Club members and Thespians for promoting generosity. Thank you to all those who donated crayon boxes. CHOC club was able to collect 175 crayon boxes to donate to patients at CHOC hospital. The Thespians’s Trick or Treat so Kids can Eat fundraiser and food drive raised over $500 dollars and collected about 1,200 pounds of canned food.