Antisemitism is not funny 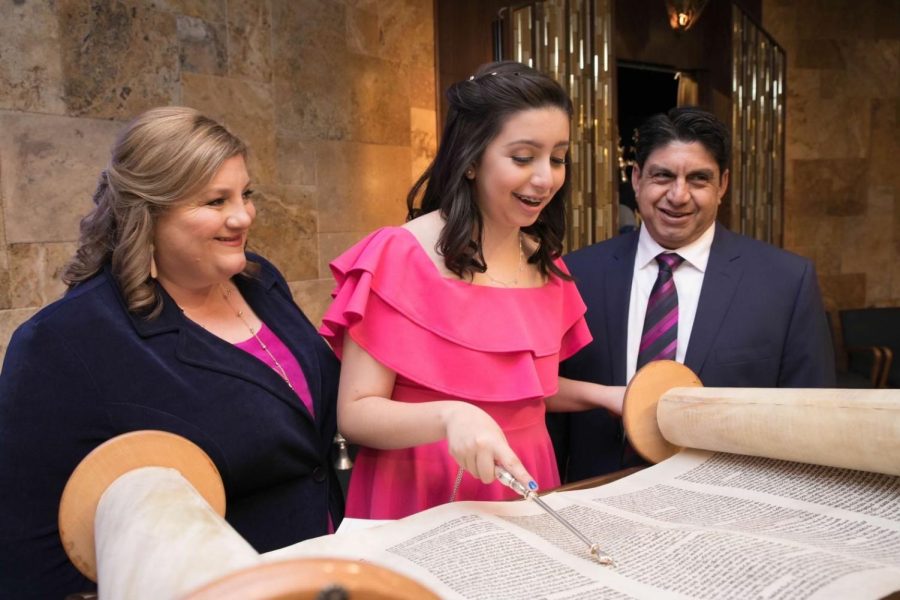 Melissa Galvan, Sophia Galvan, and Jason Galvan at the religious portion of Galvan’s Bat Mitzvah. Sophia is seen reading from the Torah.

A 2018 survey by Schoen Consulting revealed that 15% of U.S. adults believe that people should be allowed to use Nazi slogans or symbols—in apparel, online, etc.—and 11% believe that it is acceptable for someone to hold Neo-Nazi views.

With the recent antisemitic hostage situation in Colleyville, Texas, violent anti-Orthodox beatings in Brooklyn, and attempts by politicians to stop Nazi criticism in school settings, antisemitism has become more rampant and more violent in recent years.

According to the Orange County Human Relations’ Hate Crime Report, “In 2020, a total of 94 hate incidents and 12 hate crimes related to anti-Semitism discrimination occurred. This is an increase of 50 hate incidents in the past year.”

These facts, statistics and events feel disjointed and distant to us here in California, especially Fullerton. People don’t realize how alienating and frightening it is to be Jewish in 2022.

In the sixth grade, my first ever crush told me that he drove past my temple on the way to water polo practice. He continued to say he would never tell his dad that because he’d be upset his son had feelings for a Jew.

In school, I have been surrounded by people who have tokenized me. When I was in seventh grade, I was the only Jewish kid in the entire middle school, grades six through eight. That’s about 300 kids who only knew me as the Jewish girl. I was met with antisemitic jests and gestures every day. Kids asked me sarcastic questions about the Jewish tradition of a bris (circumcision). People called our holidays fake. People saluted Hitler at me. People made jokes comparing Jews to pizzas in the oven or boy scouts returning home from camp. The list goes on.

In my experience, some educators paint the Holocaust as a one-and-done event. They teach it without any reference to its effects on modern-day Jews or modern-day antisemitism. Consequently, people think that antisemitism started with Hitler’s rise to power and ended with his death. This is far from the truth. These misconceptions plant the seeds of antisemitism and can lead to actions more harmful than jokes told in poor taste.

People get aggressive, sometimes violently attacking Jewish people like in Colleyville or Brooklyn. I live in fear of that nearly every day.

Jews are a small minority here in Fullerton, so those I do know have become like a little family of people I can be myself with. Jewish people make up only 0.2% of the entire world’s population. I find solace in the small number of Jewish friends I have. Most other people, if they don’t know me well, I am wary of. I am proud of being Jewish. It isn’t something I hide, but it is still something that makes me feel like a target is on my back.

My close friend and fellow Jew, junior Ian Klatzker, talked with me about the recent surges in antisemitism. Ian said, “It’s not unheard of for things like [Colleyville] to happen. That’s the sad truth. But it doesn’t lessen the impact.” Ian went on to say, “Even though I feel safe and comfortable most of the time, it’s still there. It’s still a presence. It still lingers in the back of my mind.” During elementary school, Klatzker’s school play was The Sound of Music. After the production, fellow cast members made antisemitic jokes and heil Hitler salutes, well aware of his Jewish identity.

Although experiences like this are unfortunately common, Klatzker remains optimistic. “We have our community, and although we are still a minuscule group, we look out for each other.”

Microaggressions and so-called jokes pile up. They get to us. Sure, many of them are accidental or out of ignorance, but that doesn’t remove their sting. The real way to combat those unintentional hurtful statements is education, actively trying to stop ignorance.

This seems like a daunting and impossible task, and it is especially tough when one is trying to take down a beast like Holocaust denial or Neo-Nazism alone. But there are little—but incredibly important—changes that can be made to rehumanize the Jewish people. While it is a common saying, “speaking up when you hear something” truly makes a difference. When antisemitism is allowed to sit and slide by in daily life, people get comfortable and continue making jokes like that.

Teachers can be more mindful of the Jewish people when teaching an audience of students that have likely never met or never interacted with Jewish people. Every word you say sticks. Jews are constantly trampled over and undermined, and when Hitler’s sad youth is given more weight than the systematic mass murder of the Jewish people and their religion, it sends a message. It is a message that Jewish people were passive bodies taken into the hands of Nazis without pushback and without effect. Consider first-hand perspectives. Look into programs like Student to Student, which just created an OC branch which Ian Klatzker and I have joined.

People need to take the time to care. Watch video essays on antisemitism, read articles from the ADL, reach out to Jewish people you know during a Jewish holiday. Nobody is asking you to be an expert, but just knowing some simple things might help you better connect to those around you. We are all human at the end of the day.

Another Jewish FUHS student, senior David Block, spoke about how one can combat antisemitism. “The thing that could change this [ignorance] is asking questions,” David said. “Be curious instead of aggressive. We’re open to answering your questions. It’s not something I’m ashamed of.”