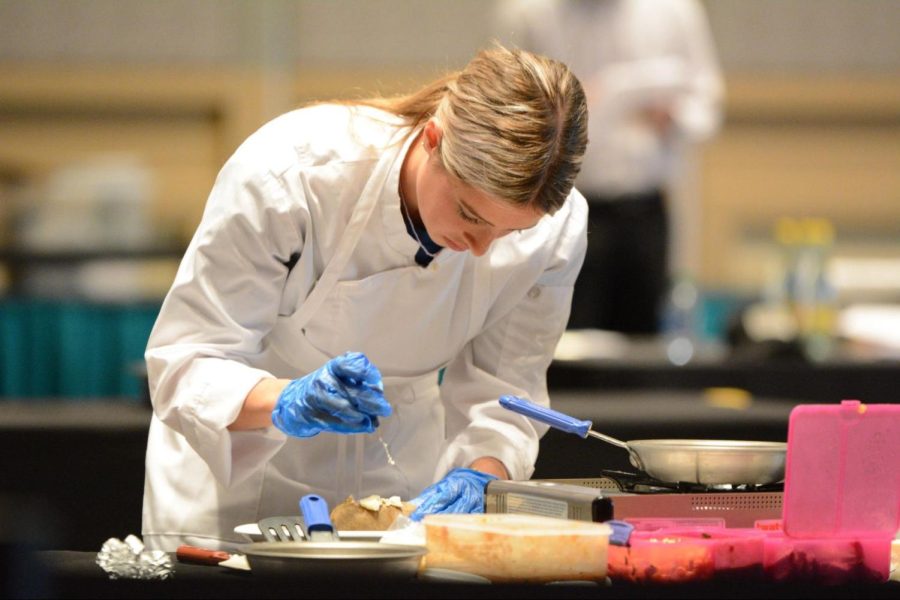 Students and staff members are invited to view cake-decorating projects created by Restaurant I and Restaurant II students this week in the Gallery. Teachers are encouraged to vote for their favorites through Thursday and winners will be announced on Friday. Each three-member team was assigned a decade (1920s-1990s) and asked to showcase their culinary arts skills by depicting themes from each decade.

According to junior Rayanna Northgrave, students started by making fondant (icing) from scratch, but students struggled to work with icing over multiple days. “Every day when we’d go to put the fondant on the cake, the texture would harden and we’d have to re-kneed it,” said Rayanna, whose group built a cake with a 1950’s theme.

Senior Jace Bauserman’s group decorated a 1970’s-theme cake with Star Wars, rock and disco images. Jace’s group also struggled with the fondant. “It was stickier than we thought it would be. When we rolled it out over the styrofoam cake piece, it would tear a bunch of times. We ended up having to do a patch job.”

Built with styrofoam bases, the cakes in the competition are not edible. Students used edible icing for the decoration but avoided materials that would spoil or melt such as chocolate.

Bauserman said his group used edible markers and edible spray paint to color their icing. “It was a little stressful trying to figure it out, but once we got it down, it kind of just started clicking,” he said.

In addition to working on their cake projects last week, culinary students traveled to Long Beach where they captured second place in the Prostart Cup Challenge.

Rayanna Northgrave participated in the baked potato topping competition. “I cut a diagonal on the top of the potato. When you squish the sides together, it falls open like a taco-style potato,” she said. “It fell open into the shape of a tortilla that kind of held everything. I had corn salsa relish, black bean salsa, carne asada and cheese. Then, I made cheese chips.”

Lewis placed third for the “Wienerschnitzel’s Dress Your Dog” competition The FUHS team also won second place in the management competition where they had to design a restaurant concept.

Restaurant I and Restaurant II students also traveled to Maple Elementary on March 2 to mentor students for their “Master Chef” competition.

“One student had really good knife-handling skills including cutting and tapping,” Bauserman said.

But some of the fifth and sixth graders lost focus. “One of them was struggling a little bit,” Bauserman said. “He would scurry away with his iPad and sit in the corner, but the chef we had helping us came over and brought him back in.”

Staff writer Valeria Macedonio contributed to this story.
Click below for more photos.