Senior Scout Passalaqua asked seniors Abby Lynch (Right) and Eliza Lynch (Left and center) to be her models for the last three art gallery shows. Passalaqua relied heavily on editing softwares to transform her photos. “I'm surprised by the end result,” Eliza Lynch said. “Because she goes off Pinterest ideas and stuff like that, which she's very good at implementation. She's very creative in that way, but then she sometimes just decides to edit it differently and I think it's really cool.”

School nurse Kristina Smith says the lifting of the mask mandate is related to the decreasing COVID hospitalization numbers in Orange County. However, masks are still recommended.

“You’ll probably see me walking around with a mask. I’ll probably see many students not. I’m a nurse, I already know the stuff,” Smith said. “It doesn’t guarantee that I won’t get this thing, but I’m sure going to try to minimize that. I’m also older. My body may not sustain whatever happens as well as say our young people. The superintendent sent out a really good message to just be kind to your colleagues to your classmates. If someone chooses to not wear one, don’t give them a bad time.”

Principal Laura Rubio says the school is ready if there is a spike in cases after spring break. “I’m hoping that we don’t take a step backwards because that is entirely still a possibility. I hope there are  enough of us vaccinated to be able to keep moving forward without masks,” Rubio said. “I think at this point the conversations are how do we deal with this endemic because it is always going to be here we just always have to be mindful and careful.”

Caution is a main priority for the school. “My personal belief is that we are going to be walking very gently forward for the rest of the year and just be prepared to bring the masks back if needed,” Rubio said.
Art in Our Schools Month


Student Support Implemented for Next Year
A majority of teachers voted to implement a new bell schedule for next year that includes a daily 25-minute Student Support period. The new schedule will be enacted for the 2022/23 school year. 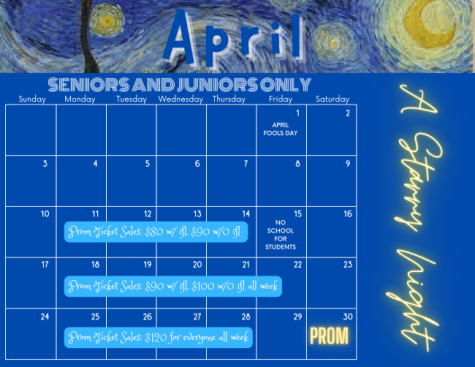 Prom Theme
ASB announced the 2022 prom theme March 4 in the Friday video announcements. A Starry Night will be held at Hanger 21 at the Fullerton Airport on April 30 from 8-11 p.m. Ticket sales begin in April. From April 11-14 tickets are $80 with IFL and $90 without. From April 18-22 tickets are $90 with IFL and $100 without. The last week of sales will be from April 25-26, tickets are $120 for all students.
Sadies Canceled
Sadies which was scheduled for March 5 was canceled because ticket sales were low, according to ASB president Jonathan Morales.

“This year for the first time ever we let the student body pick the theme and we thought that would be a good idea because we had a lot of backlash on how student input wasn’t being taken into consideration,” Morales said.

The Sadies theme, Masquerade, was chosen after a google form was sent out with theme suggestions to the students. The themes were then narrowed down and students submitted their final votes on their favorite theme.

Morales says ASB will learn from this experience and they are still looking forward to planning an end of the year dance. The date is still tentative.

Principal Laura Rubio said Gonzalez, who also speaks Spanish, is a great fit for the school.

“For me one of the most important things in leadership is being able to build strong relationships and being able to get along with people,” Rubio said. “We can teach you to do a lot of things but having that [fun and caring] personality and having that empathy and emotional intelligence is not very common sometimes and I want to have leaders that have those qualities.”
Speech and Debate
The FUHS speech and debate team has qualified for the California High School Speech Association Tournament at the end of April. The weekend of March 5 Speech and Debate competed in the Orange County State Qualifiers Tournament.