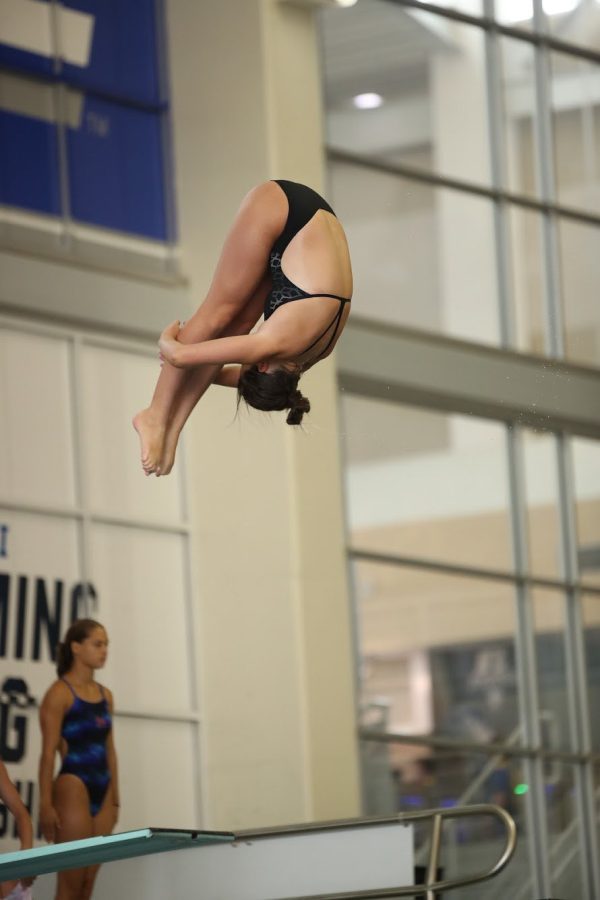 Fullerton has only three divers, but when two are nationally ranked and the third is a top Freeway League scorer, three is all you need.

Junior Simone Beinlich, who’s been diving for 11 years, is ranked in the nation’s Top 20 and has participated in Nationals six times. She says tennis was the first sport she tried but didn’t feel much connection.

“There was a pool where these kids were diving right next to the tennis courts where I was playing and I was so bored with what I was doing that I was just like looking over at the diving boards,” Simone said. “I told my dad that’s not what I’m into, I’d rather do diving.”

COVID was a very difficult time for diving as most of the competitions were canceled. Getting on a plane to travel to events was not always possible.

“Our whole season in 2020 was canceled,” said Simone who currently works with the McCormick Dives club team. “So, that whole summer is usually when we have our really big competitions. We didn’t have any for over a year.”

“Consistency is really important with diving, like keeping up with all of the dives that you have to do and not getting nervous,” said Simone, who dives for the Fullerton Dive club team. “So then taking a while off from not being in the pool or not being that high up and flipping and everything is definitely difficult. I practice five to six times a week and it’s usually for four or five hours.”

Simone has recently made a verbal commitment to dive for the University of Iowa and hopes to someday make it to the Olympic Trials.

“Just diving against the best divers in the U.S. would be awesome, especially seeing all the people I’ve been growing up with and going to competitions with,” she said. “I’d love to go there and then dive internationally. I’ve never been to an international meet and I think that would be really fun.”

Another member of the Fullerton Dive team is junior Abigail Ekstrom. She has been diving for nearly 10 years and is a member of the Claremont Pomona Dive Club. Abigail is ranked No. 15 nationally on the 1-meter and No. 24 on the 3-meter for the age 16-19 division. Before diving, Abigail played roller hockey and softball for two years.

Abigail doesn’t dive at most Freeway League meets, but she has already qualified for CIF.

“I’ll do 1 meter and 3 meter and then tower as well,” said Abigail, who practices for about 12 a week. “But for high school you don’t do tower because they don’t offer it, but you can do 1 and 3, mainly 1 meter because that’s what you do at CIF.”

At the national level, diving officials changed the age requirement from 16-18 to 16-19 to accommodate athletes who were unable to dive during COVID lockdowns. Although this was a generous policy to allow athletes to make-up a season, the change means it’s even harder to qualify for national events.

Simone and Abigail are still recovering from the training breaks forced by COVID, but sophomore Reese Eikermann has struggled even more to come back to diving after nearly two years without significant training.

“I’ll probably be done after this year, just because after COVID, I fell behind. Because we had a two-year break when we couldn’t get in the pool. After that I mentally couldn’t dive. It’s been harder for me to get myself to do the scary dives again,” Reese said. “It wasn’t so much that I was scared of an inward, it was more like I was frustrated. I was frustrated with myself because I knew that I could do it. I’ve done an inward dive a thousand times. I’ve been doing it for seven years and I couldn’t get myself to do an inward dive off three meters. It was also the social aspect of it. All these divers are amazing and they didn’t have a problem. So I think I was just embarrassed.”

Part of Reese’s stress came from diving for a club team in Pasadena. The divers were competitive and the drive was draining. She says she’s much happier since she’s joined the Charger Dive Club at Cypress College.

“I’m trying to find fun in it. I really enjoy the people,” Reese said. “I’m kind of just doing it for enjoyment because I love diving. So right now I’m only competing in League meets. And then I’m not doing any club meets, but I’ll do CIF if I qualify.”

Reese will be participating in a CIF qualifier April 22 at Troy High School. She qualified for CIF as a freshman and placed fifth, so Reese is expected to advance to CIF again this year. Abigail and Simone have already qualified. CIF will be hosted next week at Mission Viejo High School.