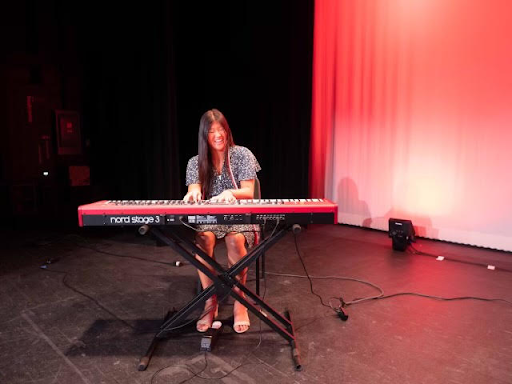 Senior Chelsea Yun leads worship on the piano and keyboard at Calvary Chapel La Habra, currently serving in both the youth ministry and main service.

Senior Chelsea Yun has been involved in music her entire life. She has been an Academy of the Arts member at FUHS since 2018, playing piano in the Jazz Ensemble.

Senior Eliza Lynch, who plays the flute in Jazz Ensemble, said that Chelsea’s musical talents were always fun to experience.

“Chelsea is absolutely amazing at piano and jazz and everything music. She is so creative and I love listening to her play and improvise,” Eliza said.

Chelsea’s music involvement goes past her education. In 2019, Chelsea began pursuing music through her Christian faith.

Growing up attending Calvary Chapel in La Habra, Chelsea said she has always loved worship music, heavily influenced by Christian artists such as Phil Wickham and Charity Gayle. Her background in sound and technology gave Chelsea the opportunity to make worship more modern and efficient.

“At my church right now, it’s, I don’t want to say older, but it’s not as youthful as other churches,” said Chelsea, who has served at church on keyboard and piano since 2019. “In the future, I want to help bring more life and energy to it.”

Although she grew up in the church, Chelsea got more involved with worship during her sophomore year.

“I went to church but I didn’t really understand. I believed in all these things, but I didn’t really know God,” Chelsea said. “In eighth grade I went to Hume Lake [Christian retreat camp] and it was great. I felt God there.” Finally, the summer going into my sophomore year is when I actually dedicated my life to Christ.”

Senior Abby Lynch has been friends with Chelsea since kindergarten. Lynch said that Chelsea has been sweet and kind from the beginning.

“Our parents always tell the story where we met outside of kindergarten and walked into class holding hands together. She’s played the piano ever since I can remember, and she was always so good. Now, she can pretty much play anything,” Abby said.

Lynch also noted how Chelsea is very humble about her talents.

“Chelsea is extremely modest. If you talked to her, you would have no idea how well she can play the piano,” Abby said. “She has a job next year teaching music for little kids, which is really amazing. Chelsea is just one of the nicest and most supportive people I know, and I’m so grateful that she’s been in my life for so long.”

Along with her gifts in music, Chelsea is an incredible athlete. Chelsea played water polo starting in the sixth grade and participated in both varsity water polo and swim all four years of high school.

“Something not many people know about me is that I actually didn’t want to play water polo in high school,” said Chelsea, who swam on the YMCA’s swim team from third to sixth grade and then joined club water polo in junior high. “My parents encouraged me to go to the summer water polo program going into freshman year and I’m really glad I stuck with aquatics for four more years.”

Yun appreciates how much she has learned from the water polo program.

“It’s been so much fun becoming a better athlete and playing competitive games and racing at higher competition with all my teammates and coaches but also because it’s taught me many life lessons I’ll keep with me forever,” Yun said.

Yun has always had a passion for STEM (Science, Technology, Engineering, and Math).

“One memorable moment definitely has to be freshman year in Mr. Hahn’s Honors Algebra 2 class,” Chelsea said. “Mr. Hahn was lecturing and we were taking notes, I sat right in front of him, and all of a sudden, Mr. Hahn screams and throws a pencil into the ceiling. It didn’t come down for a long time.”

Chelsea continues to set the bar higher and higher and leaves a legacy at FUHS in the music and aquatics programs. Chelsea will study Engineering Physics at Biola University.