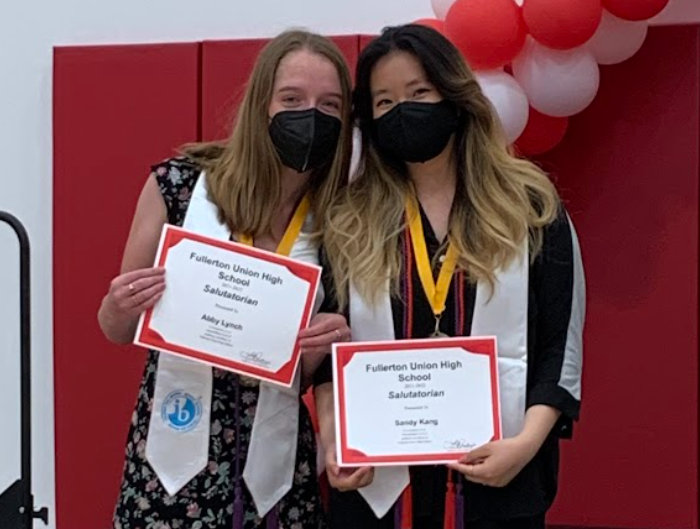 Kang centers education around the arts
Class of 2022 Choir Spotlight

When faced with the choice of pursuing music or academics during high school, senior Sandy Kang found a way to do both.

Sandy’s mother encouraged her to pursue the performing arts, and Sandy has been an active pianist and choral member since.

“I’ve been playing piano since I was 5, but seriously started playing in fourth grade,” Kang said. “My mom majored in classical music, she was actually a middle school music teacher in Korea, so in my household every child has to learn at least two instruments. I stuck with piano and then joined choir in seventh grade as well, where I fell in love with it.”

In fact, Sandy chose to attend Fullerton High School specifically because of its quality choir program, and built her academic schedule around the class. She said she wanted to participate in choir even if it would “hurt” her GPA.

“Even though I decided I wanted to strive for valedictorian, I thought that I wouldn’t get it, because our school system bases it off weighted class points,” Kang said. “So because I did choir for four years, I didn’t expect to be salutatorian as it was an unweighted class, so I was kind of caught by surprise.”

Following academic success her first two years at Fullerton, Sandy filled up her schedule even more by pursuing the full IB Diploma in hopes of preparing herself for college.

“I was trying to do the most I could, trying to challenge myself, and do what I could to make the most of my high school academic experience because I know that when you go out to college it’s going to be hard,” Kang said. “If I try to prepare myself for the workload and the expectations put on you by the full IB program, then perhaps it would be easier in college.”

In addition to being a full diploma IB student—which requires her to take an IB test in six different areas, complete an extended 4,000-word essay, and do community service outside of school—Sandy is vice president of the FUHS Tri-M Club, a member of the Academy of the Arts under the choral program, the CFO of The Neighborhood Benefit Project, and a part of the charity Smile Train.

Sandy cites her performance experience in the arts as beneficial in real world scenarios, including in the charities she takes part in.

“Outside of school I’m a part of Smile Train, which is a national charity that helps fund surgeries for children with cleft palates, and my role is to be a performer and fundraise for them,” Kang said. “I perform as a singer or pianist and am part of the yearly benefit concerts.”

She also has led and organized several research projects in her spare time in order to benefit her community.

“One was where we had to create a survey for Korean American adolescents. It was about self esteem and the correlation it has with family,” Kang said. “Another project I did was about business, and it got second place at the Diamond Challenge. My product was called Chow, which is a cow feed that helps inhibit the production of methane gas in cows.”

When asked how she is able to balance her busy schedule, Sandy said she takes time to plan out her day in advance, in order to fit in everything she wants to accomplish.

“A planner is a must. I even make spreadsheets because the hours can get confusing,” Kang said. “I’m weird but I do enjoy making a plan on my calendar of things I have to plan to the hour. I calculate how long it’s going to take to get somewhere, what time it is, etc. For regular days I have a to-do list where I write down everything I have to do that day.”
Lynch prioritizes family, friends

Reporters Alyson Jeong and Lamya Saade contributed to this story