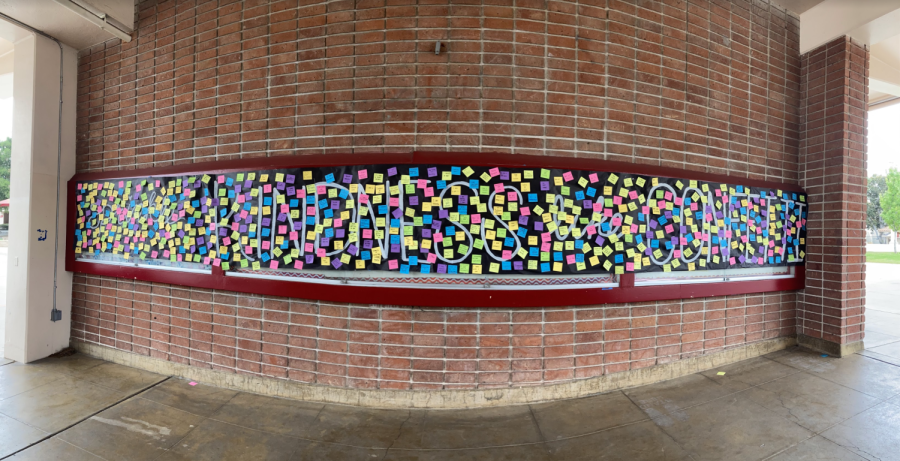 For the week of April 11, ASB students promoted spreading kindness. This poster in the breezeway displayed Post-it notes with messages like “I am powerful” and “I can do anything.”

Despite two years of singing with masks, the Fullerton Auditorium being closed for renovations, outdoor performances, and last-minute cancellations, the choral program has managed to persevere and thrive throughout hardship, putting on several successful concerts. FUHS congratulates the choirs as well as their supportive and reliable staff, director Stacey Kikkawa and accompanist Amelia Thompson, on an overall impressive year.


Spring Instrumental Music Concert
The Spring Instrumental Music Concert on April 30 featured performances from Concert Band, Jazz Band, Percussion Ensemble, and Winterguard. Other performances included a duet by sophomores Amelia Burns and Evelyn Ishikawa, a Ladera Vista Alumni small ensemble, and a combined band with FUHS alumni. Click the gallery below for photos of the concert.

Matilda nominations for JRays
After getting the revival of the 2020 musical that was shut down due to COVID, Matilda adjudication results are in and FUHS will take the stage at the John Raitt Awards for Youth (JRAYS).

Both cast and crew have been nominated in several categories and will bring a part of the show to life once more to perform for students from all around SoCal.

Nominations for standout students in the crew have also been announced. These students include: Cole Hanzel for Media/Publicity; Andrew Batchler and Kimberly Camacho for Sound; David Block for Lighting; FUHS Academy of the Arts Technical Theatre Class for Set; Scarlet Marenco for Costumes; FUHS Academy of the Arts for Stage Crew; Aurora Edmonson and Savanna Worrell for Stage Manager of the Year.

The awards show will be held at the San Gabriel Mission Playhouse on May 29th. The students’ performance for the awards show will then be judged again, and could possibly win Performance of the Day.
Cappies Winners
After a year of performing, adjudications and lots of hard work, FUHS Theatre program students celebrate their accomplishments as award season begins.

This Sunday, May 22, 49 FUHS students attended the end-of-the-year Cappies Gala. The OC Cappies is a theatre-journalism program in which students travel across the county to other high schools to watch their productions and write reviews, shining a light on student dedication and talent.

Once the Cappies season is over, critics rate and nominate the shows they saw; those scores determine winners who are then honored in the Gala with trophies and short performances. FUHS performed a scene from The Little Prince as a nominee for Best Play and a villain mashup from Matilda as a nominee for Best Musical.

This season, the FUHS Theatre program was nominated for 19 Cappies, 4 of which won their categories:

Jonah Blake won best Male Dancer for his role as Rudolpho in Matilda. Scarlet Marenco won best Supporting Actress in a Musical for her role as Mrs. Wormwood in Matilda. Ryder Tucker won best Lead Actor in a Play for his role as the Little Prince in The Little Prince. Nathaniel Baesel won best Lead Actor in a Musical for his role as Headmistress Trunchbull in Matilda.
District Adopts New Dress Code
After several months of drafting and revising, the school board approved a new dress code for the 2022-2023 school year on April 12. The new guidelines, which were drafted with help from ASB students around the district, removed most of the gender-specific language.

District official Karl Zener said the best part of the process was getting students’ input.

“This process has been amazing,” Zener said. “I’ve had seven months of working with mature, thoughtful young people. They brought excellent ideas to the table and we were able to work together.”

Principal Laura Rubio will have a chance to edit the guidelines for Fullerton’s campus before the revised dress code appears in the student handbook for the 2022-2023 school year.
Yearbook Distribution
Seniors can pick up their yearbooks on Wednesday, May 24 through Friday, May 27 in front of Room 208 (by the Photo Gallery) during lunch and after school. Juniors, sophomores, and freshmen can pick up their books on Friday, May 27 and Tuesday, May 31.
Ag student competes this week