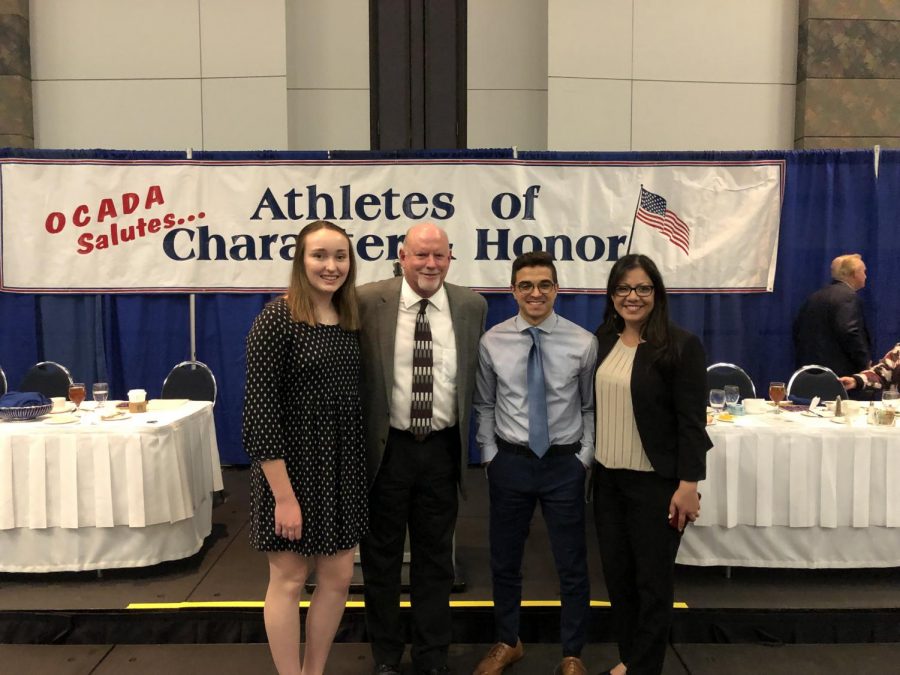 On Feb. 25, seniors Will Hollon and Sandy O’Sullivan received Orange County’s annual Athletes of Character Award which honors one female athlete and one male athlete from every school in the district.

In order to receive this award, both athletes must be chosen by their school’s Athletic Director, who makes the final decision based off their actions and character both on and off the court.

“When Coach Posthuma presented Will and I with the award, he described why he chose us. The award represents athletes who are recognized for their accomplishments as leaders with character,” O’Sullivan said.

Hollon discovered his passion for basketball in third grade, and decided to continue pursuing it in high school, playing varsity for three years. Not expecting to win this award, he found out during a school day.

“I was just sitting in class one day and Posthuma came in, gave me a letter, and said congratulations. I was just surprised and it meant a lot,” Hollon said. “This year was tough, so getting my own personal award represents all the hard work and hours.”

“It made me feel good to get recognized because I feel like in a lot of areas I’m not. To get an award like this shows all the hard work I’ve done has paid off,” Hollon said.

O’Sullivan played basketball for six years and has been a part of FUHS’s girls basketball team for all four years, along with being the varsity captain this year.

“It felt really nice to receive this award because I do a lot of training outside of high school basketball and I didn’t think my coach recognized the extra time I put into my work. So it was rewarding to know they saw it,” O’Sullivan said.

Both Hollon and O’Sullivan hope this award will not only motivate them to keep working hard, but will encourage others to do the same.

¨I hope this award will show my teammates that you can be involved in your community and show teamwork and leadership on and off the court,” O´Sullivan said.