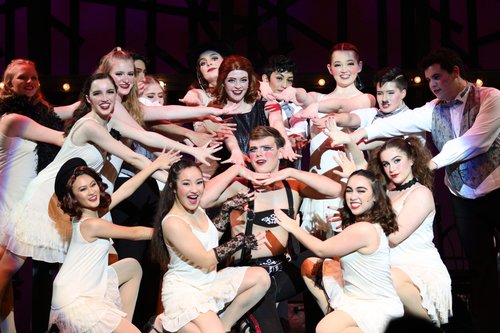 I began watching the spring musical Cabaret under the impression that I would be enjoying yet another amazing production by our theatre program, but I never thought I’d leave with such a heavy feeling in my heart.

The comical and intriguing Emcee, played by senior Devin Ricklef, helps embody the impactful and heavy message of reality in Germany at the time.

The entourage of dancers, named the Kit Kat Girls, accompany him in amazing performances, which were some of the best I’ve ever seen.

The beautiful dancers, nuanced love stories and extravagant performances of the first act distracted from the underlying terror of Nazism.

When that red Nazi flag dropped down on stage, it shocked me. Some might claim that the topic is inappropriate for high school students, but it added to the authenticity of the musical. The symbols provided an essential understanding of the terror Nazis brought to Germany.

The second act broke my heart, and brought a new perspective of the time period for me: Germans who didn’t accept Nazism, but were forced to.

The ending of the play genuinely caught me by surprise, but in the most poignant way. It ended with the dancers and ensemble arranged in “train cars” on stage, with nothing but the sound of the train moving away from the station. Behind them stood Nazi officers and the other Germans, only distinguishable by their silhouettes. The once humorous Emcee, slowly unbuttons his jacket to reveal blue striped pajamas (representing the uniform of the Jews in concentration camps), as the stage lowers. I left the show with goosebumps.

Cabaret was one of the best shows I’ve seen here at FUHS. I applaud the director, stage crew, orchestra, set designers, actors, and everyone involved.