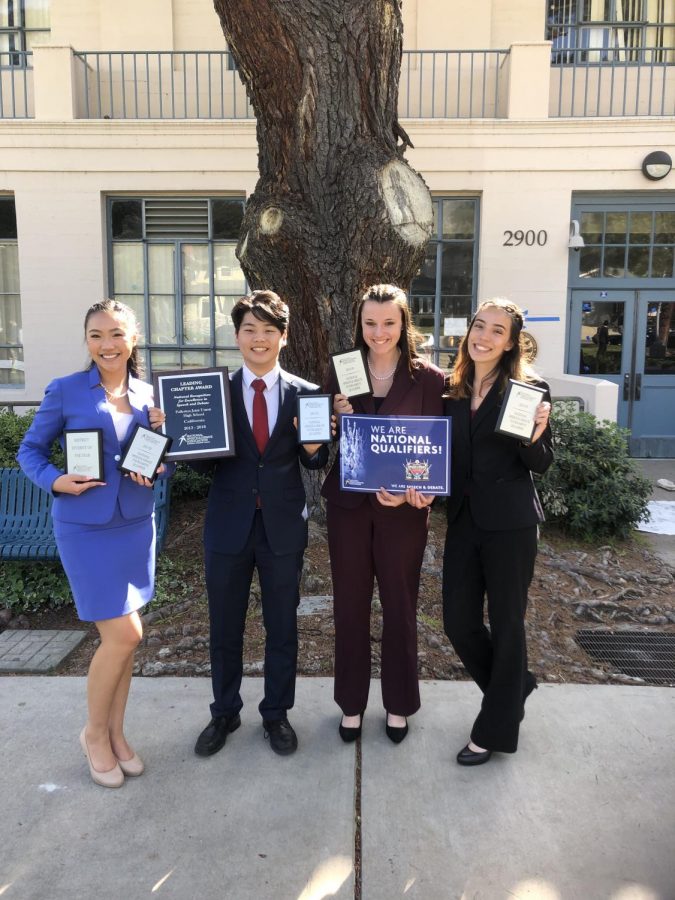 (in order from left to right) Tran, Kwon, Basham, and Wright with their tournament plaques. Photo courtesy of Emily Markussen.

Kwon’s piece revolves around the culture of war and the military in America.

“My brother went to the military two years ago, and during his time there, he went through immense physical trauma and emotional abuse. The platoon he was stationed in was one of the worst in the entire branch,” Kwon said. “When he came back, he was a completely different person, with so many problems. He was hurting all the time, and it was really painful to watch him. When I thought of what piece I should do, I thought of war, something that I care a lot about.”

“I had no idea I’d been nominated for the award, so I was totally surprised when the district chair announced it,” Tran said. “With a new coach and a huge transition this year, it’s been so much work as President. It’s extremely gratifying that my work is recognized by my team and the people around me because I do it all for them.”

The duo of juniors Lauren Wright and Sydney Basham qualified in Duo Interpretation.

“It was honestly the best feeling ever. In that moment I knew that all the hard work I’ve been putting in all year was paying off. My one goal for this year was to just qualify to nationals and having achieved that was the absolute best feeling in the world,” Wright said.

Follow the team Instagram, @fullertonspeech, to keep updated on how the students do at nationals this summer.