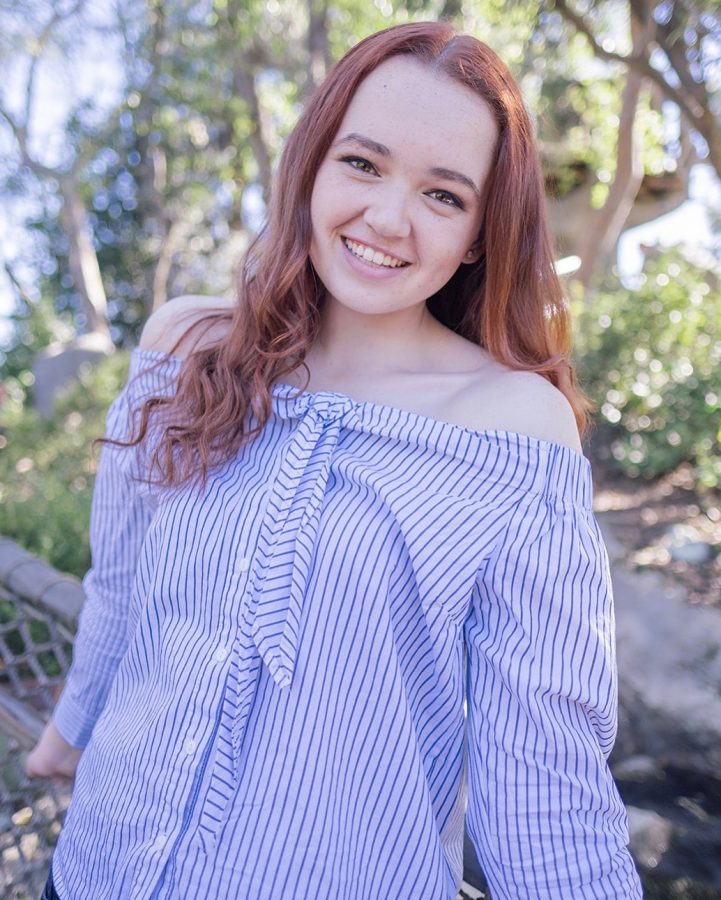 Marie in Rodger’s and Hammerstein’s Cinderella, and Chanteuse in Cabaret are just two of many roles Mikayla Haugen has taken on throughout her time at FUHS.

As President of the Tri-M Music Honors Society, president of Vocal Ensemble and Choral Club, as well as Lead Cappies Critic, Haugen must balance her rigorous involvement in the arts with her AP academics and job at Knott’s Berry Farm.

But when she first began high school, this delicate balance of time was something Haugen hadn’t yet achieved.

“I was a total stress-case crybaby as a freshman and sophomore. I was constantly stressed out, overworked. I cried a lot. I was super sensitive. I’d overreact to little things, everything,” Haugen said.

Time management was a difficult aspect of high school Haugen both struggled with and learned from.

“Between my sophomore and junior year, I pulled back in certain areas and tried to refocus on what would make me feel the best and be the best. That transformation has been huge,” Haugen said. “Learning time management has been a process, especially in junior year with APUSH. But I took the time to figure out what worked for me. I’ve decided to not let activities dictate my stress levels. I was much more successful as a junior, and I’m living my best life as a senior.”

Most students on campus might know Mikayla for her success in the arts, which constitute several of her favorite memories. Her junior year, she competed at the Southern California Vocal Association Regional Choir.

“My audition score from that honor choir qualified me to go to the California All-State Honor Choir in San Jose in the spring. I went up to San Jose and was representing FUHS. I loved getting to go up there and sing with the cream of the crop for the weekend,” Haugen said.

That year, she and the FUHS Vocal Ensemble embarked on a concert tour in San Francisco for five days. The trip not only improved the group’s singing but showed Mikayla a true sense of teamwork.

“It was kind of a rough year because we were redoing the MSA [Music, Speech, and Arts] building. We were moved out of our home for the year. Having a sense of team bonding was difficult because we were always displaced when we were rehearsing,” Haugen said.

“Getting to go on tour with this group was really helpful. Even though it was at the end of the year, it really transformed that last month of school. We sang different when we came back,” Haugen said.

Her accolades in choir are numerous, and singing will be an activity Haugen will always love. However, her passion for dance has also grown through her participation in theatre.

“My favorite musical was Cabaret, because I got to dance. I really, really wanted to dance. Getting to wrap up my high school musical theatre experience with a big dance show was super fun,” Haugen said.

Mikayla wore several hats during the production of Cabaret, including that of dance captain.

“I ended up choreographing a few small numbers and was in charge of organizing the dancers. It was nice being on stage dancing, but also hearing people and their reactions to the dance numbers. I was super proud of my hard work and the work of all the dancers,” Haugen said.

Mikayla entered high school planning to pursue the Triple Threat Pathway, but left the dance and theatre classes early due to scheduling issues that ultimately led to a greater interest. When forced to choose between taking Theatre and Spanish, Mikayla chose the latter.

“I’ve taken four years of Spanish here at Fullerton, and started with Spanish 1. I worked my way up to IB Spanish,” Haugen said. “I really fell in love with the language, and it has become something really important to me and a part of my identity.”

Throughout the past four years, Mikayla has fostered her love of the language through missions trips to Mexico.

“I’ve probably been there over a dozen times,” Haugen said. “I also traveled to Chile and Ecuador for missions.”

This interest, in combination with her passion in performing and education, has influenced her plans for the future. Mikayla will attend Biola University to study vocal performance, with two minors, in Spanish and Bible.

However, she initially intended on pursuing a BA in Liberal Studies for Elementary Education.

“Last minute, I decided to go to an audition for the Conservatory of Music at Biola, and they asked me to join their BM in Performance program,” Haugen said.

“As soon as I’m done with [undergraduate school], I’ll go back to get my multi-subject teaching credential to enter the traditional classroom,” Haugen said. “I chose a minor in Spanish to continue to develop my language and speaking skills, so that I could hopefully one day communicate with parents and families in the public school setting.”

Mikayla will undoubtedly go on to accomplish great things, but she gives one last piece of advice to her former, freshman self.

“I would tell freshman Mikayla not to sweat at all. I struggled with accepting minor flaws. A teacher would hand me back something, and I’d just totally break down if there was even something barely wrong with it. Telling my freshman self that looking at the bigger picture is more important that sweating over the small things.”