Made with Love: Critics must learn that ag students are compassionate 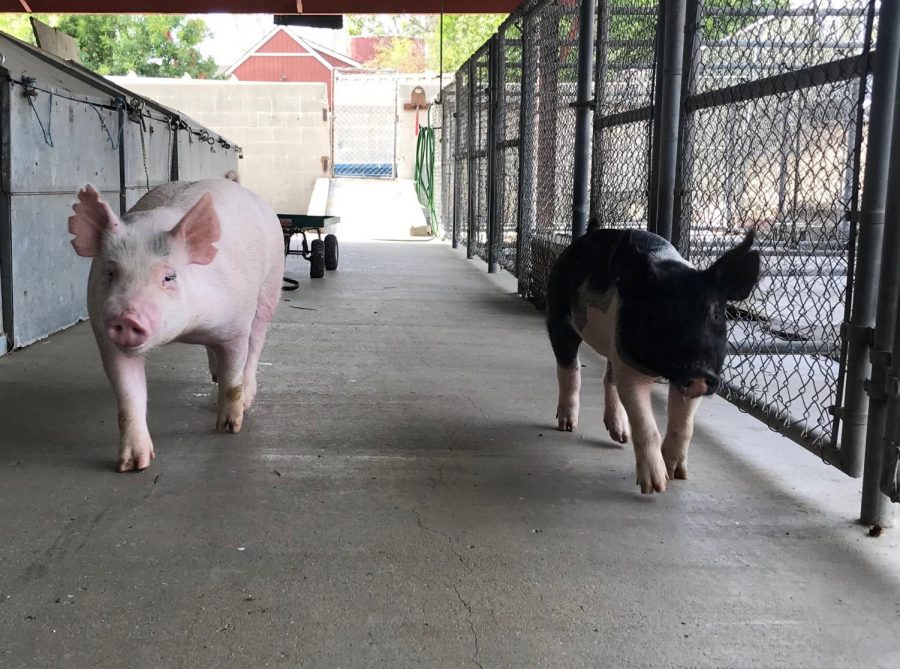 Pigs like Nico (left) and Autumn (right) are raised by FUHS students on campus for meat production. Photo by Aubrey Rynders.

A year ago today, I would have laughed at the thought of raising a pig. A pig? Gross. Too much mud. But now, it’s one of my passions on the Fullerton High School campus. Alongside several pig farmers, I’ve grown to love working with swine and developing a complex relationship with the meat our private buyers value.

Among the trending headlines on social media is the popular bandwagon statement that raising animals for food is cruel and needs to be stopped. As a student who might have agreed with the numerous articles and pictures of cruel butchering a year ago, I feel that someone needs to step up and shed some light on the truth behind raising animals specifically for meat production.

For a year now I have remained apologetic and silent about processing pigs for meat with students who also felt it was easier to keep their heads down than to respond to the negative comments of fellow students about how cruel we are to be a part of killing animals. However, society should acknowledge those who work to make meat processing more humane from within the business itself.

FUHS’s agriculture department wishes to promote the education of animal production and butchering to create a more positive connotation in the midst of tricky controversies and give peers a glimpse of the real story behind compassion in meat production.

With the ever growing momentum of animal rights over the last few years, I have found myself carefully selecting who I talk to about my love for raising pigs. However, my passion and love for animals has spurred me to open up on the seemingly paradoxical relationship between showing compassion and butchering pigs for food.

Last fall, I raised my first pig named Autumn. While I wasn’t signed up to raise a fall pig, three piglets were left without an owner and would therefore not grow big enough to be used for human consumption. The best-case scenario for those piglets was the inside of a dog food container, so I raised her myself.

Hence began the journey of falling in love with the quirks of Autumn. I rubbed her belly every morning to wake her up, opened the gate so she could play, and patted my legs to call her to breakfast. Within days of calling her mine, I knew that sending her to the butcher would be harder than I had anticipated.

Hailey Walker, a senior, had formed a similarly deep connection with her pig, Papas. She admitted that thinking of her pig being butchered was a thought she altogether avoided and insisted that while she’s in charge of animal care, that’s her only focus. Her emotional response to a four-month caretaking of her pig reminded me why I wanted to share the experiences of the silenced animal farmers.

FUHS senior Katerina Gomez said, “[My pig and I] would chill after school and I would have some lemon bars or twinkies and he’d be eating them with me.”

Buying meat from FUHS students means an investment in meat that has been cared for and loved by students who go above and beyond to make them happy. In turn, the butchering process has made leaps and bounds in the way of humane processing, so students no longer have to be afraid to hand over their animals.

Here is where social media has got it all wrong. Pictures flood the internet of brutal butchering processes, but the real experience our pigs go through is nothing like the depiction created online. Instead of allowing the animals to suffer, butchers employ a tool called the captive bolt pistol that uses a rod of stainless steel to puncture the cerebellum and renders the pig unconscious and therefore unable to feel pain. While videos portray the violent spasms of the muscles after the stunner is used, this reaction is actually common among any living creature upon sudden death and does not indicate that the brain is sending pain signals to the rest of the body.

Once educated about the humane ways we are able to butcher pigs, it’s easier to admit that most people benefit from this process of raising animals for consumption. Sometimes the harshest critics of animal production aren’t vegans or vegetarians but rather consumers of meat. It should put their minds at ease, though, that the way animals are killed has been shaped by compassionate people who see the necessity in processing animals for food but strive to make it as painless for them as possible.

Both Walker and Gomez wanted to make sure they gave the best possible life to their animals rather than using the eventual butchering as an excuse to do the bare minimum as if caring for them would be a waste of time and energy.

By devoting hours of my day to caring for Autumn, I grew not only as a farmer, but as a person. Allowing myself to be compassionate toward an animal that is inevitably processed actually gave me more than heartache, money in my pocket, or a unique experience to slap onto a college application. It gave me a vision for the future of the Fullerton High School agriculture program. And none of that would have been possible without the joy of working with Autumn.

Oftentimes in this business, the most compassionate people are the ones who understand the need for well-raised meat and learn to positively influence the butchering process instead of revolt against it.