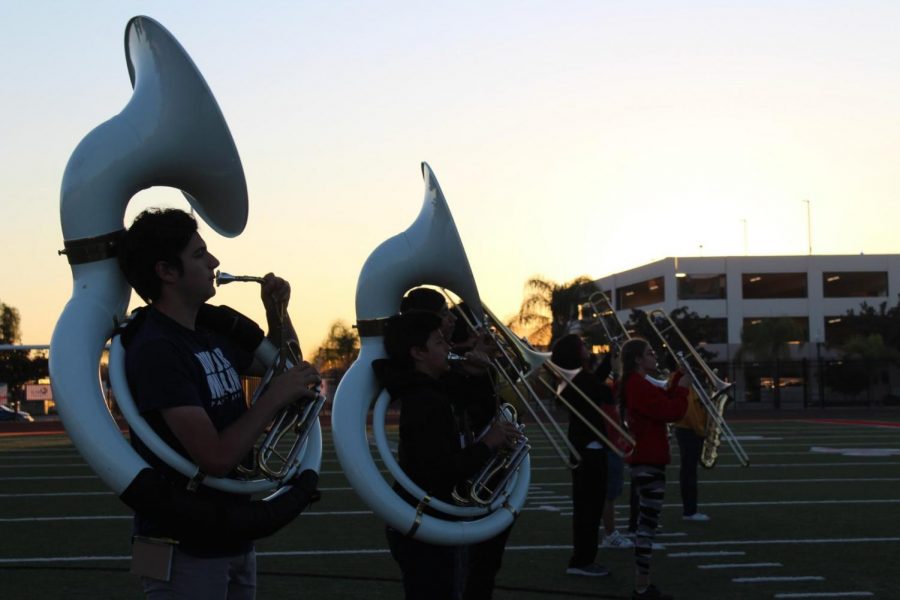 The Marching Band and Pageantry Corps are preparing to compete at the California State Band Championships (CSBC) Semi-Finals on Nov. 16 at Yorba Linda High School. If they perform well enough, the group will move onto the finals at Newport Harbor High on Nov. 23.

The group’s competition field show is an original piece titled “Into the Cosmos” that is made up of three movements. The show depicts the wonder and exploration of the cosmos, the dangers that lie within, and the safe return to earth. The three movements are comprised of selections from Radiohead, The Twilight Zone, and Star Trek.

The Marching Band and Pageantry Corps put in a lot of time to prepare for competitions. All 43 band members, including the five members in Color Guard, practice as early as 6:30 in the morning up to three times a week. On some occasions, they will stay after school until 8:30 p.m. to perfect their routine.

This year the Marching Band is comprised of mostly freshmen and sophomores. Although a young band needs more training, the FUHS band makes it work.

“If one person doesn’t do their job it messes up the whole thing, but I think that the fear of messing up kind of keeps people motivated,” said Oates, who has mentored a few freshmen. “People figure out it’s better to just work hard first and then worry about the stress of competing later.”

With fewer than 50 band members, Fullerton competes in Division 2A. However, according to drum major Elistein Estrada, a small band can be strong because each person has the chance to shine.

“A lot of people say that a bigger band means it is easier to win, but I find that with the smaller band no one can really hide behind a more talented person,” Estrada said. “Everyone has to play their part or else we just sound smaller. I think this year we sound better musically and we’re a lot louder. We have that confidence.”