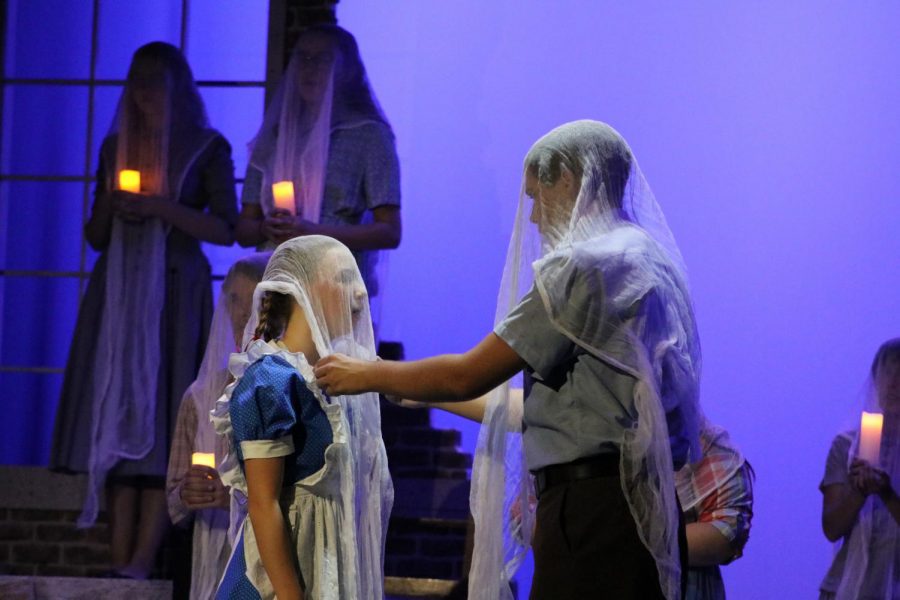 Sophomores Emma Hill and Nate Baesel cover themselves in white cloaks during a performance. Photo by Jose Perez

Director and theater teacher Michael Despars wanted to choose a play that would teach his students the consequences of making decisions without proper thought.

He found the perfect project in Jiggs Burgess’s 2018 play The Girl in the White Pinafore based on the real-life New London school explosion in Texas on March 18, 1937.

Fullerton is the first California school to perform the play which opens Friday, Nov. 8 at 7 p.m. in the Little Theatre.

“I think this play is about making a decision and having to live with the consequences of that decision when you don’t really think about it, when you don’t really look at the big picture,” said Despars, who is also pleased to present important historical details such as the fact that natural gas is now scented like rotten eggs.

“So we have something that we deal with every day—that we smell every day—and we don’t realize that it’s because 300 kids lost their lives,” Despars said.

Theater students were fortunate to meet the playwright Oct. 28 when Burgess traveled from Texas to watch a run through of the show in the Little Theater.

Sophomore Nate Baesel said the cast was a little nervous about the visit.

“It was a little nerve wracking to have him in the audience because, you know, he knows all the lines,” Baesel said with a laugh. “It’s his work, and to be able to make it our own is both scary and rewarding.”

Baesel said Burgess was impressed with the production, especially the dance number choreographed by students. “He even said that the set was the best he’s ever seen, so that was pretty crazy to hear.”

Senior Georgia Rau, the assistant marketing designer for the production, said the process of turning the Little Theatre into the aftermath of an explosion was a feat.

“For lighting, we are trying to make sure that they embody the ghostly aspect of it,” Rau said. “[The crew is] really taking into consideration everything. Because the whole show’s about an explosion, so they want to really encapsulate how that looks.”

The technical crew outfitted the stage in a coat of rubble and debris. Stage design, light design and sound design come together to forge a haunting and ghastly set.

Senior Avi Block, the sound designer for this production, had some insight into the creation of this devastating tragedy, but it hasn’t been easy. The play shifts between 1937 and 1962 and Block had to figure out how to depict that shift with sound. Block also boosts a bass sound with a subwoofer to enhance the explosion sound effect.

Sophomore Emma Hill plays 12-year-old Amelia Davis, the girl in the white pinafore. Amelia is a schoolgirl who was decapitated in the school explosion and now haunts Mr. Shaw the school administrator, played by senior David Kwon.

Hill said the play shows the brief last moments of Amelia’s life and her haunting Mr. Shaw after the explosion takes place.