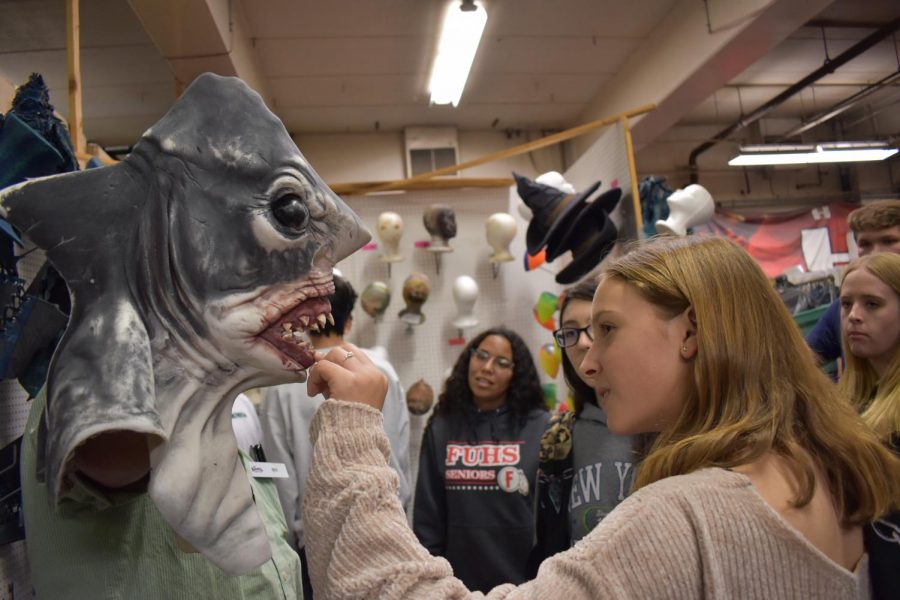 BEAST students took a behind-the-scenes field trip to Knott’s Berry Farm Nov. 5 to learn the visual and special effects used in the Knott’s Scary Farm attraction. Below is a Q&A with BEAST adviser, Scott Hudson.

Tribe Tribune: What is BEAST?

Hudson: BEAST is an acronym for Biology, Engineering, Arts, Science and Technology. It is designed to show students the connections between art and science through the skills of the special effects industry. It was formed out of our two successful programs: our STEM academy and our Academy of the Arts department.

Is FUHS the first school to have this program?

Hudson: We created the whole BEAST program from scratch. There’s nothing like this program anywhere. A lot of schools do STEM, but they just go and buy a kit and add a couple syringes and popsicle sticks and make a little claw arm that picks stuff up. What Mr. [Jim] Pitochelli and I are trying to do, is not create the next generation of assemblers, but the next generation of innovators.

How did the idea for the BEAST program start?

Hudson: The idea started about five years ago. At the time, the television show Face Off was very popular. People are supposed to make underwater makeup or effects or something like that, and the judges always look for biological accuracy. That was a starting point. My brother had worked at the Stan Winston studios and I used to go hang out there waiting for him to get off work. I was watching them create all these monsters and use machines and animatronics there. I also worked at Disneyland for nine years as an attractions lead— like an attraction manager and trainer— so I got familiar with the animatronics in the theme park industry. The robot T-Rex that was in the Jurassic Park films is virtually identical to the T-Rex that’s at Universal Studios on the Jurassic Park ride. This is the industry that uses robotics and engineering, plus mold making and casting

and sculpting and painting. If we could bring this together somehow, we’ll  have a really neat program. We also have a really good tie with Knotts Berry Farm’s entertainment division. We go on backstage tours and seen the applying the makeup and body painting. We are still dedicated to all of the components of arts and sciences and we’ve even had a tie-in class now that Mrs. Pipala is teaching a special effects chemistry class.

What are some projects BEAST students work on?

Hudson: For the Pirates of the Caribbean project, students were given a 30 inch, bald, fully articulated anatomically accurate skeleton. The goal for the project was letting kids try being a Disney Imagineer. If you’ve been on the Pirates of Caribbean attraction, in the beginning there are cages with these bleached skeletons. But if you’ve seen the film, all the skeletons come to life. We thought it would be fun to redo the beginning of that ride and replace the static skeletons that just sit there with the ones from the film. We used special effects artistry to make the skeletons look weathered and desiccated. We used liquid latex, called slip cast latex, then we airbrushed them and applied hair. We had to create costumes to fit an old, rotten skeleton. After we got the more realistic and rotten pirates, Mr. Pitochelli had the students engineer a machine that used one motor but created two different motions at two different speeds. We had pirates driving the ship’s wheel while lifting a glass to their mouth, or pirates holding a sword in one hand while they tried to put their eye back into their socket with the other. There’s the art component, but then there’s the engineering component. Another good example would be the Insect project, where students design a machine that used motors and wheels to move like a cart. It was battery operated and it had electric eyes to sense things in front of it. Then the students programmed arduinos, like a mini computer. Then we took the machine and we sculpted over it to create a spider. They had to design the machine to be the right size and shape to fit within the body of the spider. So it started off with the biology, then we vacuformed a plastic shell to make a lid. Then the kids sculpted over that in clay, used plaster to cast the case, poured foam latex and baked the foam latex. Now we had our spider body much lighter and flexible than clay. We paint and reapply that on top of the machine. So it looks like a spider, but there’s a machine under it controlling the motion. The students had to design all of that from scratch.

Hudson: They love that we’re trying to take their industry into a high school. Almost everyone we meet in the industry always says the same thing, “Where was that class when I was in high school?” Well, they didn’t have that class when I was in high school either, so now that I’m a teacher I decided to make this, the greatest class ever. They have a $1500 summer boot camp, but have been giving us $750 scholarships to BEAST students. The kids go to the Cinema Makeup School, working with active professionals and meeting Academy Award winning special effects artists. Last year too, the Stan Winston gave our Students of the Year total access passes to their website, which has several thousand hours of videos of professionals demonstrating and making film special effects. Plus the Knotts staff basically takes a day off of work to carve out time to do field trips. They are real nice, they give us free T-shirts every year. I love a good free T-shirt.

How does BEAST help students prepare for a career?

Hudson: A lot of the skills that we teach the kids are used in many industries, not just special effects. For instance, Mr. Pitochelli teaches welding. Or some kids get into programming and coding. Some really get into 3D-CAD (Computer Assistance Design) and 3D-printing. Some kids just like doing mold making and casting or sculpture and painting. Like our first project, the kids have to make artificial eyes and set them into a sculpt of their own face. But there’s paid professionals that get paid to create ocular prosthetics, artificial eyes. That could be a high paying technical skill in the medical community. Skills like that are transferable into other professions. Kids that are able to think creatively and scientifically, from an engineering and an artistic perspective, can manufacture prototypes that have never been made before. We teach kids the whole industry from idea to development to manufacturing to installation and application.

Will BEAST be having future expansions?

Hudson: There is another class that we have ready to go when the district or school decides to start it. Our third class would be called Creative Arts Design and Engineering (CADE). Now that students know what to do, why don’t they create their own thing? A great example of a CADE project would be replicating fish from the benthic region of the ocean, the deep dark abyssal regions, where the fish are translucent/transparent. Many are of bioluminescence and glow in the dark. We could replicate using silicon, which is translucent LED technology. We could use fluorescent paint and put them under black light. That’s something Disneyland was doing 30 years ago with their old submarine voyage. Somebody had to make that giant squid fighting a whale in the bottom of the submarine voyage tank.