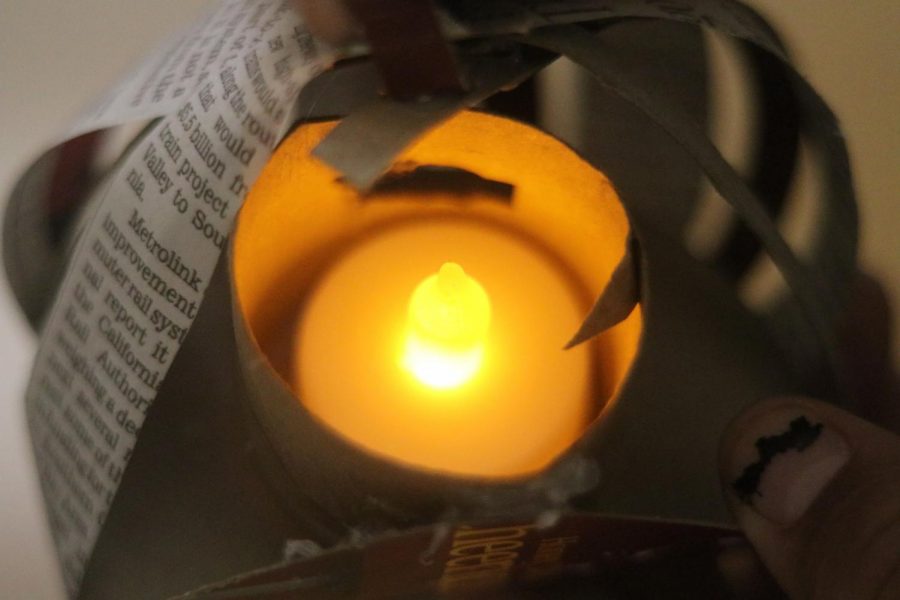 The Tribe Tribune staff was so impressed with their project, that we had reporter Alex Orozco film the hallway, adding his own voice over to enhance the story.

Some might say that it was unfair that other second period classes had to compete with AP Art students. Even a few of us in second period journalism grumbled at first. But on reflection, we could see that it was actually a more equitable move to give the real artists more work than the rest of us. Best of all, the art students contributed something special for the whole school to enjoy.

Kudos to ASB, too, for also awarding a first-place breakfast prize to Spanish teacher Abimael Mendoza’s class for their Coco-themed door. Just like the movie, this door honors the Day Of The Dead by displaying skulls and Papel Picado, thin paper cutouts. The top of the door is framed with the phrase “Recuerda Me,” which translates to “Remember Me.”

“It was great because it coincided with his teaching theme,” said ASB organizer Gwen Gonzalez.

We agree. It certainly was a good year for two top-prize winners.

The office staff was honored with third place for its impressive scarecrow and bright orange pumpkins. Science teacher Kristen Cruz’s class finished fourth by combining anatomy and school spirit with their Indian skull.

Highlighting ghosts from our past, social studies teacher Sharon Hollon’s class paid homage the legends of FUHS by writing “Tribe Time” and “long lunch Fridays” on tombstones. Hollon and her students’ sense of humor and imagination earned them fifth place.

Although the second period journalism class didn’t make the top five, we here at the Tribe Tribune worked tirelessly on our door, presenting red, white and black masks, newspaper cutouts and pumpkin-shaped lanterns made from cartons and newspapers. These details came together to create an image for the large riddle pasted on the door: What is black and white and read all over?

“My favorite part in the process was being able to work with different people in the class that I didn’t really know and now I’m more comfortable with them,” said Tribe Tribune photo editor Betsy Barreto, who made pumpkins out of newspaper and toilet paper holders. “I also liked that I was able to show my creativity.”

Our concept was a bit silly with an elementary school riddle. And we admit that few people still read black-and-white newsprint. But the fun we had working together to problem-solve and create art outweighed any breakfast reward.

We should continue to have these school-wide friendly competitions to promote ingenuity and teamwork among students.