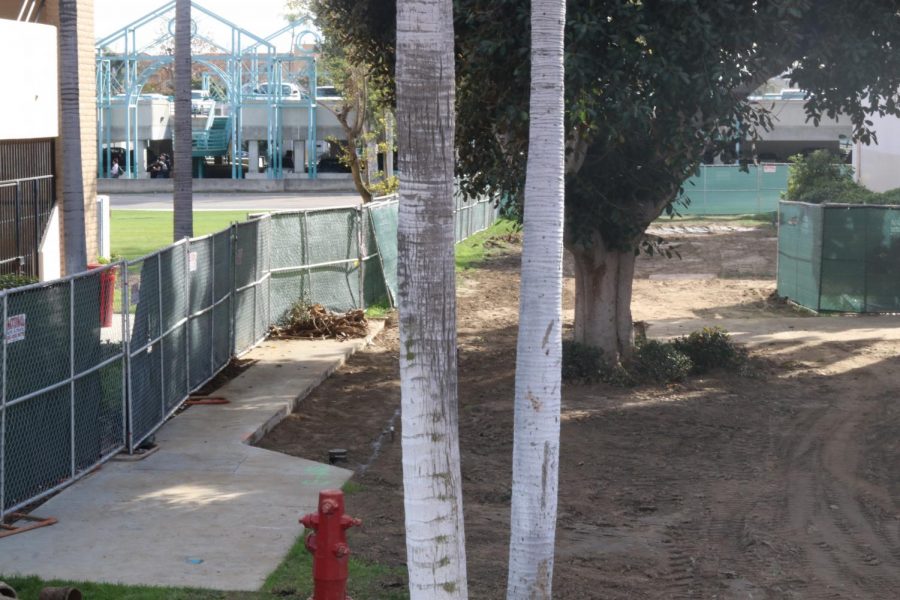 The fencing west of the office surrounds the current electrical wiring project that will eventually power the elevators being placed in the science building near Pomona. Photo by Josh Hanson.

CAMPUS— Over the next few months, the Fullerton campus will undergo construction to become compliant with the Americans with Disabilities Act (ADA).

Recently, fencing went up near the science buildings to prepare for the installment of two new elevators. The installment date is not set yet. In addition, a new handicap ramp will be installed in the football stadium, set to be completed around May. The construction is not expected to affect any sports.

A new shade structure, similar to those above Senior Corner, will be installed above the tables by the 140s and 150s buildings this spring.

As for the new gym, a groundbreaking ceremony will be hosted on Feb. 11. School officials hope construction will begin in March.

COUNTY—Anaheim residents have announced their discontent over the Angel Stadium deal, where Anaheim city officials will sell the 153-acre property for $325 million and keep the baseball team playing in Anaheim until 2050. Residents argue that the price is too low. Residents also feel increasing concern because city officials only recently announced the deal.

Attorney Kelly Aviles sent a letter on behalf of her clients explaining that residents felt the city violated the Brown Act, allowing the public to attend city legislative meetings. However, city officials responded saying there were no wrongdoings with the negotiations and that the deal will continue.

COUNTY—On Jan. 26 the U.S. Health Officials confirmed two cases of the Coronavirus in Southern California: one in Los Angeles and one in Orange County. Officials say there isn’t an immediate threat to the public since the patients are currently being treated in isolation. To stay cautious however, wearing surgical masks and continuous handwashing will ward off germs.

STATE—In 2018, California moved its presidential primary elections from June to March 3. Vote-by-mail ballots must be sent on or before the election day and must be received by county election offices no later than three days after March 3.

According to PBS, voters registered as “unaffiliated” or “no party” are ineligible to cast their vote in the primaries. California offers only closed primary elections, meaning only registered party members are allowed to vote in their designated party’s election.

NATION— A 51-49 Senate vote rejected Democratic efforts to bring in new witnesses for President Trump’s impeachment trial. While four Republican senators were expected to vote with Democrats, only senators Mitt Romney and Susan Collins did. This vote indicates the trial’s upcoming conclusion, which Senate Majority Leader Mitch McConnell says will end in the coming week.

WORLD—The Australian bushfires began in early December and have since claimed the lives of 25 people, burned over 16 million acres of land, and injured over one billion animals. As the fires continue, Australia is also facing extreme weather, ranging from floods in Queensland, hail storms near the Australian Capital Territory and dust storms in southeast Australia. According to the Bureau of Meteorology, Australia will experience a heatwave for the next four days, exacerbating the fires.