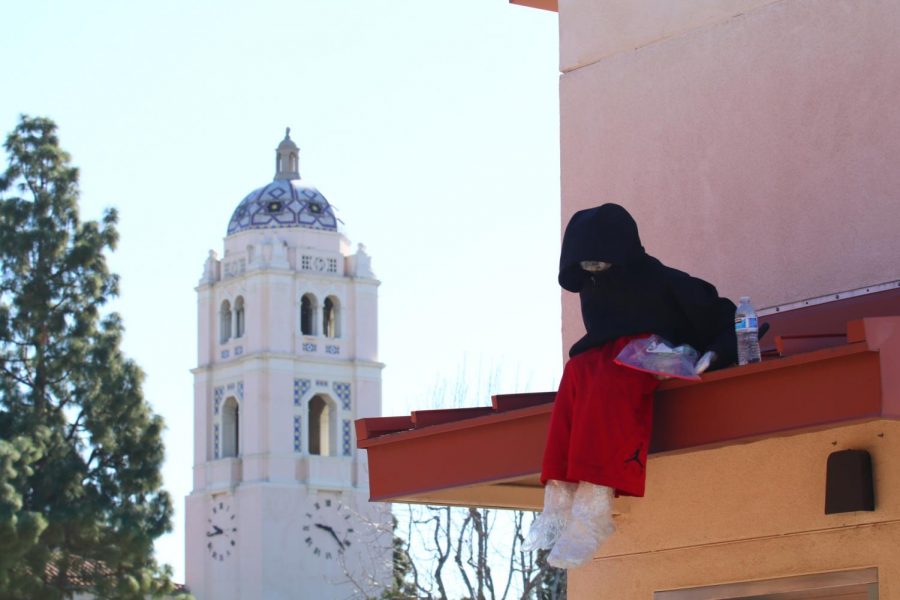 A dressed sculpture sits on top of the elevator near the math building to show the intensity of the loneliness and despair among the students. Photo by Arashk Alivandi.

To elicit emotional reactions from the FUHS audience, the 3-D Design class used Saran Wrap and packaging tape to create realistic human models. Sculptures were placed in the freshman tree, the 200 Building, the library and near the math building elevator. Another sculpture was placed on campus superviser Frank Ramirez’s cart, but only for about an hour.

Freshman William Bitting says this assignment was inspired by American artist Mark Jenkins who travels around the world placing his taped sculptures to stir up reactions in people.

“[Jenkins] does these big city pieces that are exactly like ours. He actually tapes the whole body because he has the time. He has four hours to sit and do this. We didn’t so we had to do it piece by piece,” Bitting said. “We went over that for like two days, of just examples of this artist and how he works and stuff like that. He takes them and sets them up in a big city and all of his are like very intricate.”
The process took three to four weeks for the students to complete the project. For Bittings group, he was the model who ended up being wrapped completely by the tape.

“Getting wrapped wasn’t the biggest issue. You’re sitting there and you can’t really help without a certain point because it’s too stiff. You can’t move your arm,” Bitting said. “It takes a lot more work than you would think. It’s also something that you won’t think is possible, because it’s tape.”

Each sculpture held stories that were told through the sculpture’s poses and its location. One sculpture titled “Restrained” was created by freshman Cassidy Mullens and her group to show how social media hinders students from knowledge.

“The reason we put it up in the library is because the library would usually mean knowledge, growth, learning, and if you saw closely to the ribbons it had different social media platforms, like Pinterest and Facebook,” Mullens said. “Social media sometimes drags you away from learning.”
The point of these sculptures was to startle the campus in a memorable way.

Bitting said there would be a lot more of these to come.

“I know some peoples’ projects got touched and whatever, which is a give and take. You don’t want people to destroy it, but you want them to interact with it. That’s the point of installation art,” Bitting said. “It’s not like regular art that is meant to be put in a museum, and be looked at. It’s meant to be interacted with.”
Click on the slideshow below for more photos.