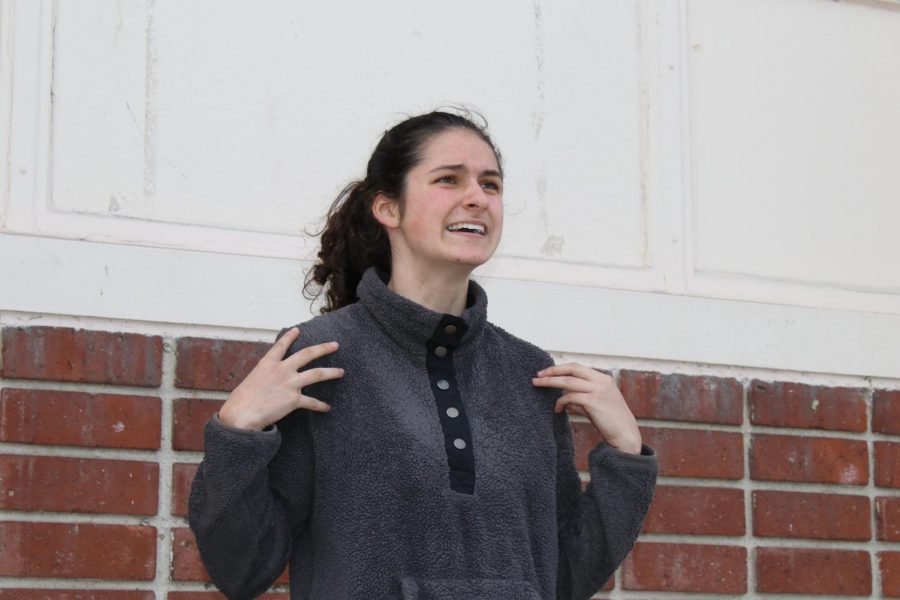 Freshman Amelie Heying practices her speech titled “The Great Gay Depression,” which delves into the topic of mental illness in the LGBTQ community. Photo by Arashk Alivandi.

Freshman Amelie Heying identifies as bisexual, but it wasn’t until middle school that she questioned her sexuality.
“I always thought I was straight,” Amelie said. “Like, I thought I was going to move to Texas and have seven kids. I thought I was going to become Mormon.”
That eighth grade year, after realizing she might not be straight, Amelie turned to the internet.
“I did one of those stupid things where you search up, ‘Am I gay?’ on Buzzfeed,” Amelie said. “I got 100%.”
Amelie says that coming out wasn’t as difficult as she expected it to be, thanks to her accepting parents. However, she calls herself lucky and her experience unique.
“Parents play such a big role in your life,” Amelie said. “When a parent isn’t openly accepting, it becomes so much harder for the teen to come out. I’m an only child so my parents are my only support group.”
“There’s always this thing in the back of your head that’s going to say, ‘Should I come out now? Oh, maybe not. Oh, this wouldn’t be the right time.’ And then you just keep postponing it and it gets worse and worse.”
According to youth.gov, teenagers identifying as LGBTQ+ are two to seven times more likely to attempt suicide than teenagers identifying as heterosexual.

“A lot of my friends had problems with depression [in middle school], and it became a very prominent problem that came to influence my daily life,” Amelie said. “I kept on seeing news story after news story about teen depression, and headlines like ‘this LGBT kid killed themself.’”
Amelie says that a contributing factor to this higher rate of depression and suicide is the lack of parental support.

“It’s a product of parental and societal disapproval,” Amelie said. “Society has influenced parental views on sexual identities and forces the parents to not accept their children.”
So, as a first-year member of the FUHS speech and debate team, Amelie decided to use the activity to promote conversation and shed light on teen depression in the LGBTQ+ community.
She competes in the event Program Oral Interpretation (POI), where she performs a compilation of literature excerpts surrounding her chosen topic.

“It really hits home for me,” Amelie said. “It’s a shared experience, like homophobia from your parents or indirect microaggressions. My parents are very supportive of me, but to a certain extent they’re never going to be able to really understand. It’s that misunderstanding that is provoking this issue and I really wanted to bring that out in my piece.”
Amelie treats her POI, titled “The Great Gay Depression,” as a call to action for all parents. Her speech serves as a warning with the eventual suicide of an LGBTQ+ teen, with one of her last lines being, “I’m not the one who needs to learn.”
“Your child is still the same person they always were,” Amelie said. “I’m definitely different after I came out, but not in a bad way. There was this sense of relief, like, ‘Okay. You can fall in love with anyone. It doesn’t really matter.’ I felt at peace with myself.”
While she aims to influence parents’ attitudes, Amelie also hopes to establish a safer, more encouraging LGBTQ+ community through her performance.
“My POI is an ‘I relate to you!’ call to other teens who are suffering from this issue. It’s a way to reach out and create a more open space.”
In addition to being an ambassador for gay rights, Amelie is a model speech and debate student. Not only does she rehearse about 12 hours a week, Amelie strives to get the most out of all speech events.
It’s because of this work ethic that head coach Emily Markussen selected Amelie to compete at the prestigious Stanford University tournament Feb. 8.
“There are two ways you can go on a field trip,” Markussen said. “You go for fun, or you go to learn. Amelie, despite being a freshman, was clearly there to learn, to look at what her competition would be for qualifiers, for qualifiers next year, and for nationals next year.”

Speech team president Hana Kim says she noticed Amelie’s dedication during the tournament. Instead of taking a long lunch break or playing on her phone, Amelie chose to watch as many other student performances as possible.
“While other underclassmen decided to go to the bookstore to buy clothes or souvenirs, Amelie stuck around with the upperclassmen to watch a final round,” Kim said. “She knew what she wanted. She knew why she was at Stanford.”
Although consistently winning at future tournaments is her goal, Amelie says she experienced the most meaningful moment after her Stanford performance.

“This girl came up to me in the stairway,” Amelie said. “She seemed a bit shy. She said, ‘Hey, your piece helped me so much. I’m a closeted bi and I haven’t been able to come out to anyone in my entire life. My parents would never understand.’”
It’s this personal aspect of speech and debate that draws Amelie closer to the activity.
“In theater, it’s not your own story you’re telling,” Amelie said. “It’s always somebody else’s. In speech, you’ve compiled or written your own script. It’s personal to you and in every moment I can relate to it and particularize everything to fit my own story.”
Because Amelie’s coming-out experience was positive, she strives to create that experience for all other LGBTQ+ students.
“It’s just so hard to come out,” Heying said. “It’s so hard. There’s no alternative. You can’t just, be straight, if you are gay. So, if you ever need anyone, I’m here.”