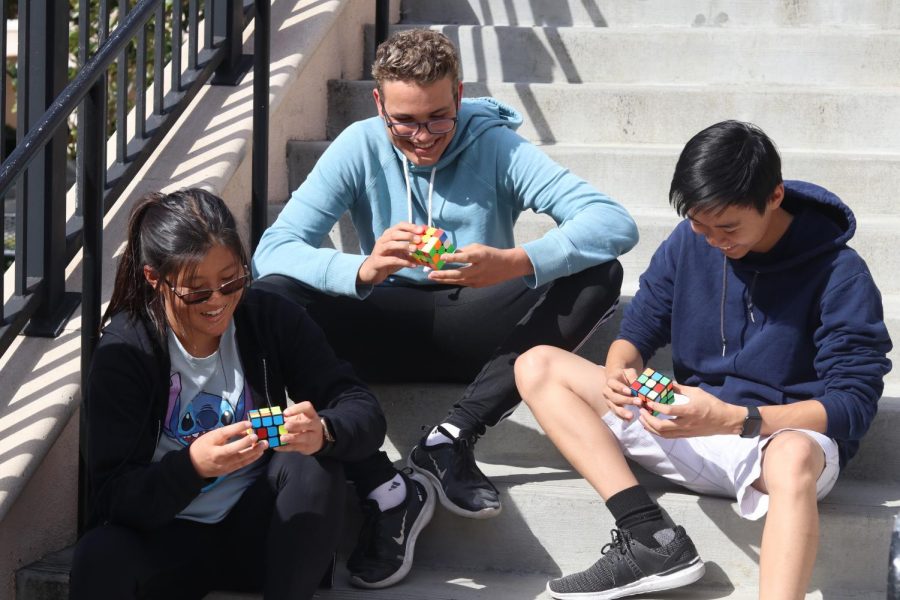 You’re back in a 1980s classroom. You pull out your Rubik’s Cube and start to shuffle the pieces before the bell rings to get a solve before your classmates. This is what it was like back then—Rubik’s Cubes were everywhere on campus. Instead of hiding their phones, students would hide their cubes.
Although the fad has faded, Rubik’s Cubes aren’t dead. If anything, they have risen from the past and are making a comeback. I didn’t notice its resurrection until it was brought to my attention by journalism teacher Kimberley Harris.
“I was surprised to see my sophomore English students with them,” Harris said. “I had a few cubes lying on my back table this week and sophomore David Block picked one up and solved it in under a minute.”
As a reporter, I realized that I had to discover what all the fuss was about. I talked to three sophomores with varying degrees of Rubik’s Cube knowledge and asked them to give me a beginner’s lesson. Despite their efforts, everything they said sounded like a different language to me.
“So layer by layer means you solve the initial side, the cross first,” sophomore Landon Casaday said. “With all the lines lined up, then you solve this by putting the corner pieces in so they match up. Once you finish that you insert the first pieces.”
Huh? So, like any good investigative reporter, I consulted YouTube. I spent a week looking at tutorials, but, alas, cube-solving skills just weren’t in me. 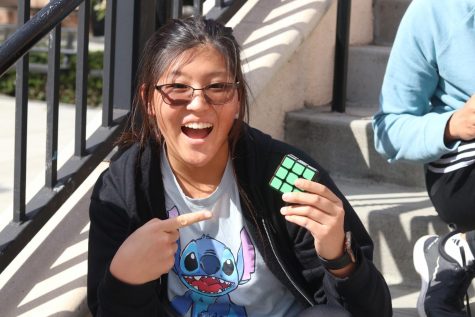 Sophomore Chelsea Yun can solve a Rubik’s Cube in about one minute. Photo by Lexi Ruesga.

“There are hundreds of methods,” said Casaday, who learned to solve the cube at age 8. “So every day I would pull out the instruction book and learn the algorithms and the right spots and memorize it so I could do it on my own. Yeah, it was an impressive thing to do.”
Casaday, who can solve the cube in 25 seconds, says working with the Rubik’s Cube is more than just a fun distraction.
“It uses both logic and colors, you turn off half of your brain,” Casaday said. “It helps you zone out and then helps me focus. I have ADHD and it just helps.”
Casaday says that the only skill you really need is patience.

“A Rubik’s Cube isn’t really a test of skill, it’s a test of dedication,” Casaday said. “You really have to sit down and look at the packet and learn the algorithms to do it. You don’t have to be smart to do it, you just have to do it.”
Sophomore Kevin Le never tried to solve a Rubik’s Cube with much enthusiasm until last Christmas. “You could solve it in one day if you follow the steps,” Le said. “There was this website I followed that showed you how to solve a cube and I solved it one day.” Just in the past few days, however, Le has managed to shave this solve time to 55-58 seconds.
Sophomore Chelsea Yun says practice really does make perfect when trying to solve a cube. Learning the different algorithms like “F2L” or “The White Cross” are tools they practice over and over again to perfect their skills and complete the cube.
“It’s frustrating when you think you did a step right and you didn’t,” Yun said. “You completely mess up everything you’ve done.”
Yun, who started playing with the cube in seventh grade, says the first solve is the hardest and longest to do, but someone can complete it with practice.
“It’s like playing an instrument, it’s practicing and practicing and practicing to get better,” Yun said. “You just move pieces and they fall in the right place.”
The Rubik’s Cube is a fun pastime, but for people like Landon Casaday the fun transforms into something more.
“There are four types of people. The first one gives up and says ‘I can’t figure it out.’ The second person figures it out once and throws it away. The third remembers it so it’s like a cool party trick. And the fourth is someone who wants to do it faster and beat their friends,” Casaday said. “I’m the fourth one.”
Click below to see Landon Casaday solve a Rubik’s Cube in 26 seconds.