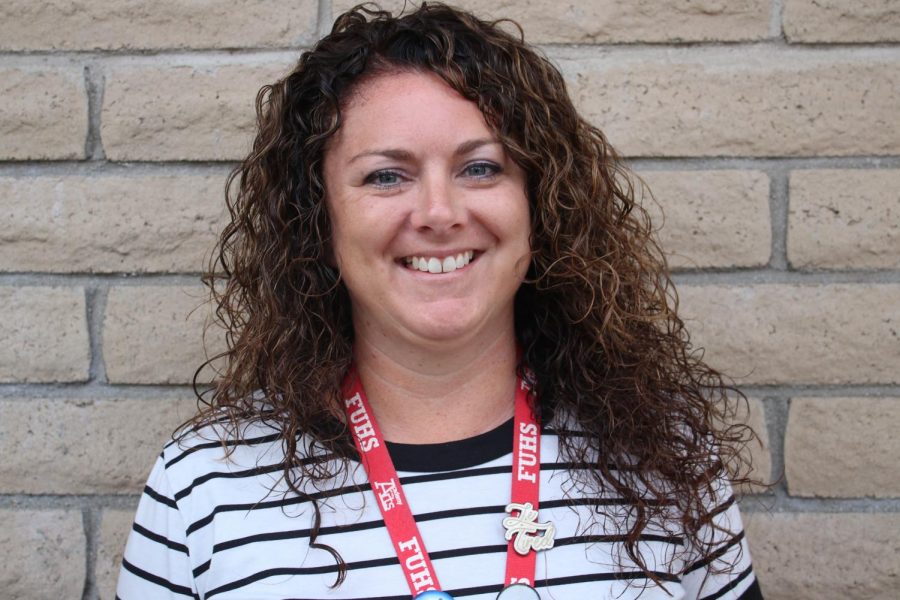 Guidance counselor Erin DeFries was voted Certificated Employee of the Year by the FUHS staff members. Photo by Arashk Alivandi.

Counselor Erin Defries was getting ready to leave at the end of the school day when a staff meeting was called. She needed to run some errands before she got home, so she hoped this wouldn’t take long.
Soon after teachers and staff arrived, principal Laura Rubio announced that Defries had been selected as Certificated Employee of the Year. The honor usually goes to a teacher, but Defries’s peers voted to give the award to a beloved counselor.
“I was just really surprised, totally caught off guard, and also very honored. I kept thinking, ‘I’m not a teacher, I don’t deserve this! You all wasted your vote!’” Defries said.
However, Defries’s friend and Spanish teacher Helen Craft disagrees.
“[The award] is for any certificated employee, and she totally qualifies for that. She is very hard working. She totally goes above and beyond,” Craft said.
Many students like junior Troy Fregoso find Defries to be a very helpful and realistic adviser for their post-high school aspirations.

“She’s basically the best counselor ever. She’s helped me along my college process, helped me pick classes and helped with grades,” Fregoso said. “She’s always someone I can talk to, and I know she’s in my corner. I really appreciate that.”
Her caring personality translates to her being a great mother as well. She will get a FaceTime from her 8-year-old daughter a few times a week, eager to tell her mom about the happenings of the morning.
“She FaceTimes me to ask where her shoes are, or to tell me about a dead caterpillar she found in the backyard,” Defries said.
Defries wasn’t always on track to be a counselor. In college, she was seeking a major in psychology but was advised by her friend’s father, who was an assistant principal, to look into counseling.
“I feel like I had so many people always focusing on the negative experience with their counselors that I really didn’t want to be that person,” Defries said.
However, Defries didn’t want to go into the private sector for psychology, and she enjoyed working with students, so she began searching for a job. She eventually found one at Mission Viejo High School where she stayed until the education budget was cut in 2009.

Defries began interviewing at other schools but struggled to find a job. She was feeling discouraged when she arrived for her interview at Fullerton High School.
“I’m never gonna get a job, I’ll have to go back to bartending!” said Defries, who nailed her interview and has been working at Fullerton High School since 2009.
Defries attended Quartz Hill High School in Lancaster. She said she doesn’t even really remember her counselor.
“I went to my counselor senior year because I wanted to drop Algebra 2,” Defries said. “She didn’t even try to talk me out of it. She just said ‘Okay.’”
Defries did, however, have good relationships with her dance and journalism teachers.
“My AP English teacher also taught journalism, and I took journalism my junior year. His name was Mr. Dupratt, and he was awesome. I loved him. He was a total goof and would harass me endlessly, which I totally appreciate,” Defries said. “I’d blow my nose really loudly, (I don’t know why) and I remember I went into the room where we pasted the articles onto the paper, and I blew my nose. When I came out, he said ‘There’s no point in hiding it, we can all hear you from the next room.’”
Her positive relationship with her English teacher probably influenced her decision to become a counselor, a job that relies on relationships.
“[My favorite part of the job], I would say, is just the relationships I create with students, and just getting to know them and getting to be a part of their high school experience,” Defries said. “I feel like this job kind of suits my personality.”
She tries to balance motivating students to strive for big dreams with helping students set realistic goals.
Craft said, “She doesn’t mince words, when I need to hear something, she’ll tell me. She’s like that with students, too.”