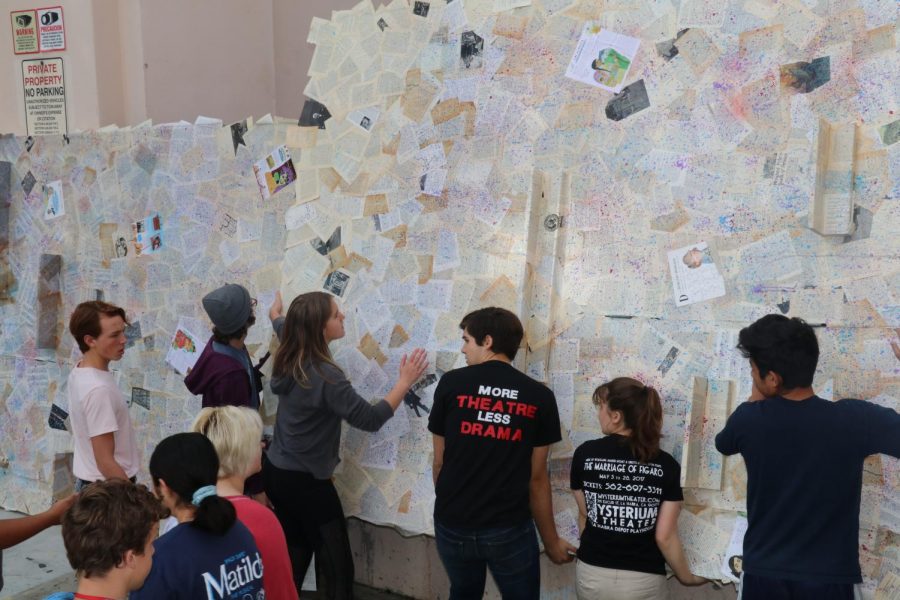 The tech crew plasters hundreds of children’s book pages onto flats to help set the scene for Matilda. Photo by Arashk Alivandi.

Editor’s Note: The Tribe Tribune learned Thursday night that the FUHS Theatre Department would have to postpone its production of Matilda. We are truly heartbroken. Our reporter Alejandra Rodriguez spent several hours transcribing interviews of dedicated theater artists. To honor everyone’s hard work, we’ve decided to run the story about the show despite its cancellation.
March is Women’s History month and theater director Michael Despars knew Matilda would be a great choice for the theater department’s spring show.
“I don’t think we do enough shows with females as the vehicle for telling the story,” Despars said. “I think it is really important to look for things where the perspective is female, where the perspective is minorities.”
A little girl who is unloved by her parents and has a terrible headmistress, Matilda uses her intelligence, psychokinetic powers, and her wit to stand up to her bullies and fight for her fellow students.
The set for this show has thousands of children’s book pages plastered to flats, books scattered throughout the stage and hanging from wires, projections that emphasize scenes, as well as images of important women in history that tell their stories and accomplishments.
“We felt that we wanted to honor famous women throughout history who have really changed the game in how our society runs and functions,” Despars said.
The women recognized range from historical figures such as Frida Kahlo, Rosa Parks and Amelia Earhart to modern day inspirations such as Oprah and Beyonce.
Set designer senior Mark Rojo wanted to focus on Matilda’s knowledge and make that the centerpiece of the design. Rojo also paid homage to Matilda being a child by appealing to our inner child.
“I wanted to specifically not do just every other set Broadway did,” Rojo said. “Of course they have books and pages but we wanted to make that the bigger emphasis.”
Sophomore Emma Hill who plays Matilda admires her character’s sass and her ability to thrive even when everyone is against her.
“There is something burning inside her,” Hill said. “There is this desire to be understood.”
Hill enjoys the common theme of powerful female characters being the lead and fighting for what they believe in showcased in this year’s theater productions.
The female leads for the show were double-cast. Freshman Alexis Helmer and sophomore Emma Hill were scheduled to play Matilda on alternating performances while junior Brittany Fisheli and senior Joyce Kim were scheduled to alternate the role of Miss Honey.
In preparation for Matilda costume designer, senior Emily Laguna, read and annotated the book to get a feel for the characters’ styles and personalities.
“I want to be a perfectionist,” Laguna said. “I take inspiration from the Broadway production and I take inspiration from the book Matilda.”