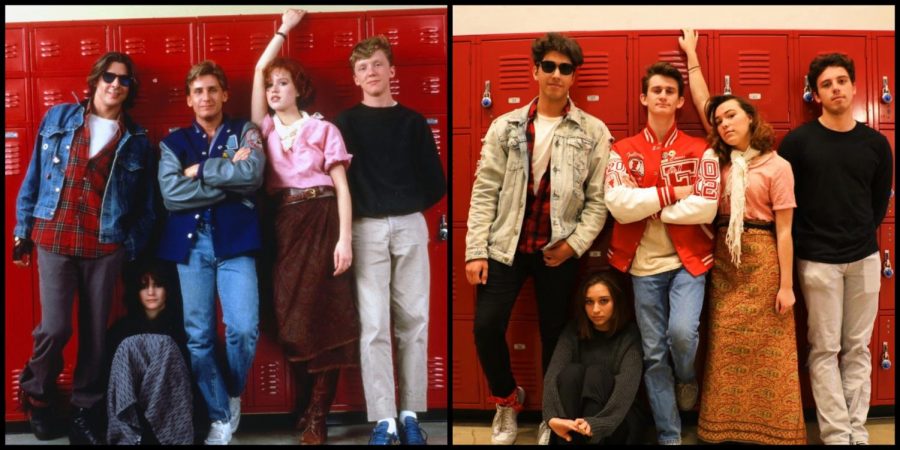 ASB’s Stranger Things themed Sadie’s dance last Friday gave students a fun flash from the past, demonstrating the neon timelessness of 80s teen culture with activities ranging from playing Donkey Kong to Skee-Ball.
To celebrate both ASB’s hard work and the 80s time period, the Tribe Tribune staff reviewed several 80s teen films that remain socially conscientious and enjoyably applicable to teenage lives today, nearly 40 years later.
For instance, the classic rom-com Pretty in Pink (1986) delves into socioeconomic divisions and highlights a strong female lead through the independent and resourceful Andie.
The cult classic The Breakfast Club (1985) reminds students that humanity transcends labels and assumptions based off of preconceived judgments.

My assignment was to review Fast Times at Ridgemont High (1982) and Sixteen Candles (1984) and, like the other reporters, write about each film’s social relevance in 2020. Up until two weeks ago, I had not seen either of these movies. When I finally did, I was appalled. Multiple times during each movie I frantically pressed pause to write down the lines or scenes that shocked, alarmed, unnerved me.

Yes, it was a different time period. What’s socially acceptable now is obviously different than what was acceptable then. Regardless, I don’t feel it appropriate to write a review praising these films, films that don’t reflect the standards and morals of today’s society.

I’m not whining for a ban of Sixteen Candles or censorship of Fast Times at Ridgemont High. I mean, I paid to watch them and I’m writing about them now.
But as we reflect on these 80s classics, it’s important to understand this: “things were different back then” cannot justify the stereotypes or actions portrayed in these films, ideas that have contributed to dangerous themes of racism, misogyny and rape culture in America. 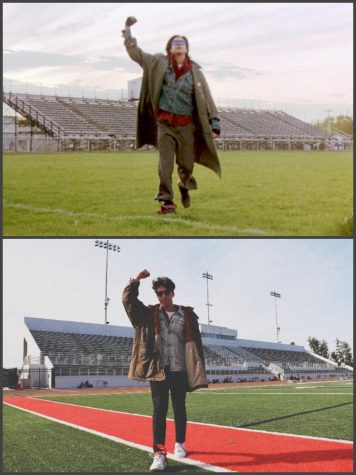 I watched Fast Times at Ridgemont High (often referred to as Fast Times) first, a coming-of-age comedy following multiple characters like Stacy Hamilton, a sophomore navigating her way through high school, dating and sex, and Jeff Spicoli, a lovable inane surfer and stoner.
Fast Times was heralded as an honest and comedic representation of teenagers exploring the awkward complexities of high school, but I wonder if Fast Times would still be considered socially appropriate if it were released in 2020.
Actually, I felt Fast Times treated topics like casual sex and abortion in a responsible manner. What I question, however, is the idea of a 26-year-old man pursuing a 15-year-old girl, the zoom-in on the breasts of said 15 year old, and the overt objectification of character Linda Barrett in her red bathing suit.

These scenes could be dismissible, permissible, even, according to “the times.” But this film, and others like it, are now being used as justifications for potentially illegal behaviors.
During the 2018 Senate hearings on Supreme Court Justice Brett Kavanaugh and sexual assault allegations made by Dr. Christine Blasey Ford, the then-nominee referenced Fast Times and the films Animal House (1978) and Caddyshack (1980) as examples of typical teenage behavior in the 80s.
In an opinion piece published by The Guardian in Oct. 2018, Culture reporter Steve Rose writes, “Kavanaugh invoked these 1980s teen movies as an excuse for the ‘goofy’ things he was up to at the time, which certainly didn’t include blackout-level drinking or sexual assault – allegations that Kavanaugh has denied.”
Again, I’m not trying to paint Fast Times as an evil, criminal movie. Rather, I want to emphasize how seemingly innocuous movies can distort ethics and condone destructive behavior.
I’ll admit, however, I enjoyed Fast Times much more than I did Sixteen Candles. The main storyline follows the sixteenth birthday weekend of sophomore Samantha (Sam) Baker and her crush on popular senior Jake Ryan. 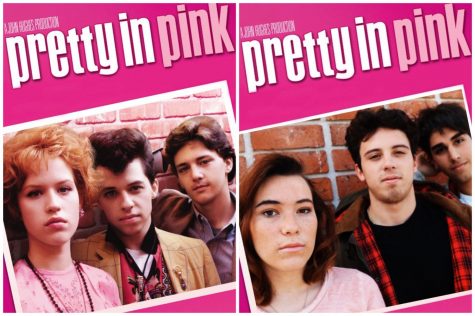 Tribe Tribune staff members recreated famous 80s film posters, including the movie Pretty in Pink (1986) which delves into socioeconomic divisions and highlights a strong female lead through the independent and resourceful Andie. Photo by Lauren Wright.

This storyline is cute-ish, if not anti-climactic. The issue lies within the movie’s subplots— side stories chock full of rape culture and racism.
First, Sam’s love interest Jake, absolutely horrifies me.
After a massive party ends, Jake and character Farmer Ted discuss girls and sex.
“I can get a piece of ass any time I want,” Jake tells him. “I got Caroline in the bedroom right now, passed out cold. I could violate her 10 different ways if I wanted to.”
Then, as what’s supposed to be a gesture of good will, Jake suggests that Ted, a drunk freshman, drive Caroline home, insinuating that Ted should take advantage of the opportunity.
“She’s so blitzed,” Jake says. “She won’t know the difference.”

Not only does Jake objectify Caroline as a “piece of ass,” but ignores her body’s autonomy and jeopardizes her physical safety. By offering Caroline to Ted, Jake implies that her decision in an activity that requires mutual agreement is irrelevant.
If a person is inebriated to the point of unconsciousness, they are incapable of engaging in consensual sex. Non-consensual sex is, by definition, sexual assault.
Jake is characterized as a “good kid.” He wears sweater vests and isn’t a party animal. So, it appalls me that the scriptwriters gave the film’s ultimate happy ending to the character who basically functions as a pimp.
Another frightening takeaway from Sixteen Candles is the character Long Duk Dong, a foreign exchange student from an unidentified Asian country staying with Sam’s grandparents. 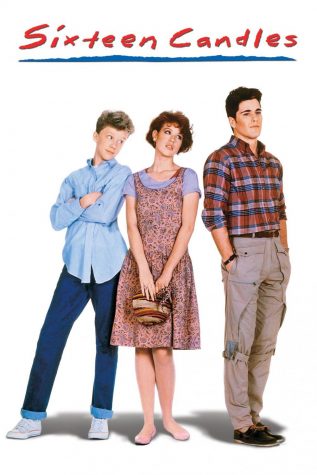 Sixteen Candles (1984) follows the sixteenth birthday weekend of sophomore Samantha Baker and her crush on the popular senior Jake Ryan.

Long Duk Dong is characterized by a broken accent, maniacal laughter, and drunken, stupid behavior. Every one of Long Duk Dong’s appearances in the movie is tastefully accompanied with a loud sounding gong.
An NPR All Things Considered episode called the character “one of the most offensive Asian stereotypes Hollywood ever gave America.”

In the episode, co-founder Martin Wong of Giant Robot, a magazine covering Asian and Asian-American pop culture, remembers being the butt of Long Duk Dong jokes.
“Every single Asian dude who went to high school or junior high during the era of John Hughes movies was called ‘Donger,’” Wong said. “If you’re being called Long Duk Dong, you’re comic relief amongst a sea of people unlike you.”
Long Duk Dong’s social ineptitude and confusion over American customs make him the laughingstock of the white Baker family as well as the laughingstock of Sixteen Candles viewers.
Playing up a character trope in the name of comedy can be effective. But writing in Long Duk Dong solely to play the punchline of a racist joke implied that Asian immigrants and Asian-Americans were laughable fools.
Sixteen Candles and Fast Times have their merits as coming-of-age movies, and I know these scripts can’t be changed and these scenes can’t be cut. But unfortunately, they’re not the only 80s films with homophobic slurs and date rape scenes in them. So, as we enter this flash from the past, keep the guard up. Don’t dismiss offensive narratives or inappropriate jokes as attitudes subject to time period. Question them. Compare them. Remember them. After all, it’s 2020. That “time period” excuse is four decades outdated.