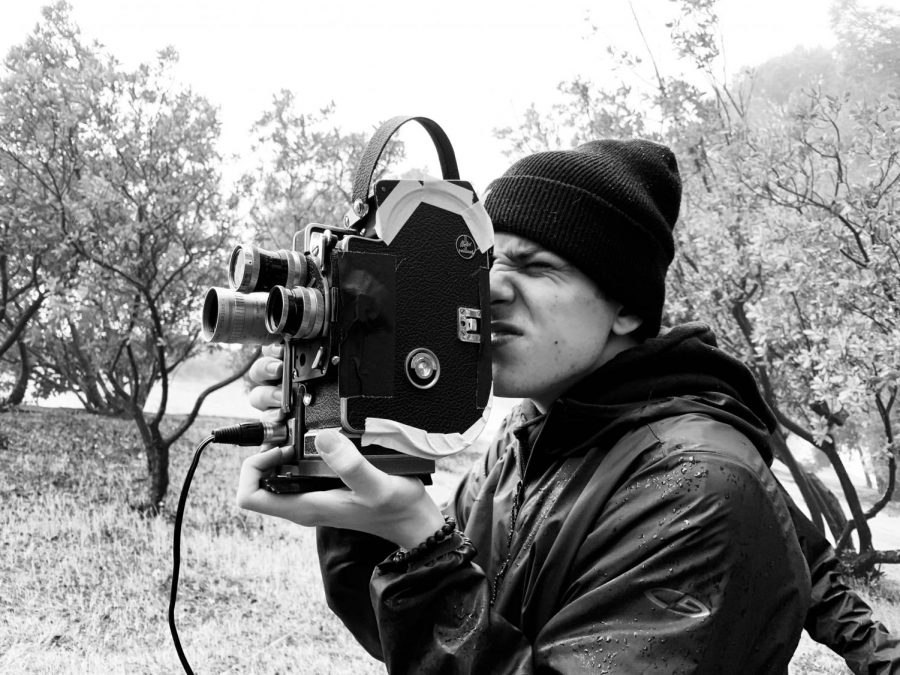 Samuel McIntosh filmed "Bound," a short film that can be found on his YouTube channel. Photo by Anthony Booth.

Regardless of what classes they take or teach, there’s one name current FUHS students and staff are familiar with: Samuel McIntosh.
Samuel graduated from Fullerton in 2017, but his name resurfaces on campus constantly. Several FUHS teachers still show Samuel’s film projects now.
“Samuel’s project was the best produced video I’ve ever seen,” said literature teacher Mike Alvarez. “By far, the best.”
His freshman year, Samuel started his own film production company, VOID Productions, to document everything he created, including the literature project based off of Charles Bukowski’s poem “So You Want to Be a Writer?”
VOID now also directs advertisements, photoshoots and has produced music videos for singer-songwriter Josh Malilay and the music group Andy’s Room.

“VOID is a diary for everything I do,” Samuel said. “Even though it’s cringe to look at your old stuff and I’m constantly thinking, ‘I’ve got to do better than that,’ I can look back and say this is what I made and this is what I learned.”
Most recently, Samuel co-produced the feature film North Hollywood with Mikey Alfred, founder of the skate company Illegal Civilization. Skate Newswire calls North Hollywood “first major motion picture about becoming a pro-skater.” The film features actors Miranda Cosgrove and Vince Vaughn.

Illegal Civilization held a buyers’ screening at the ArcLight Hollywood theatre Feb. 13. According to Deadline, Pharrell Williams signed on to produce the film. Samuel says to watch out for North Hollywood’s official release in theatres next summer.

“I’ve had a lot of trepidations that I wasn’t ready to go into co-producing a feature film,” Samuel said. “It was like imposterism. What am I doing here? This is kind of crazy and overwhelming.”
Despite this, Illegal Civilization is already looking to Samuel for a new project.
“I want to write something really good so I can take it to these guys and impress them with it,” Samuel said. “But more importantly, I want to make something original, something I want to make. I want to do something totally me.”
His partnership with Illegal Civilization has inspired him to pursue filmmaking more. Samuel is now writing a short mystery thriller called “Paper Face.”
“The big thing is, I’ve realized you have to do what you want to do,” Samuel said. “What I want right now is to write and direct my own movies. Real, feature movies, and release them in theaters and have people go and watch them and have fun.”
Samuel currently attends Cal State Northridge. He initially enrolled as a general film major but switched to Screenwriting his sophomore year.
“You have to learn directing by doing it,” Samuel said. “But screenwriting is a more demonstrative thing. The projects start with a screenwriter, so if I can produce my own stuff, everyone else comes to it.”

While college has opened up many opportunities for Samuel, including his partnership with Mikey Alfred, it was at FUHS that Samuel built the foundation of his passion—from directing original PSA shorts in AP Environmental Science to storyboarding his vision of Fahrenheit 451 in English.
AP art teacher Scott Hudson remembers Samuel’s AP Art portfolio, a collection of original movie posters. Samuel’s portfolio received the highest possible score of 5.

“Movie posters are really complicated when you get into them,” Hudson said. “But in the end, all of the best artists are just good storytellers, whether it’s drawing, painting, sculpting, photography, motion picture. Samuel was interested in all of that.”
His senior year, Samuel helped Hudson pilot the first year of the BEAST program. Hudson says Samuel’s involvement with BEAST will serve him well in the film industry.
“Some people are very imaginative, but it’s just rainbows and unicorns,” Hudson said. “Samuel is imaginative, but he’s able to apply it. He’s focused, and that’s what this industry needs. It’s one thing to be creative but it’s another thing to be creative with productivity.”
Hudson met Samuel at age 4, and remembers how fascinated Samuel was with design and production. Hudson visited the McIntosh family home for dinner, and Samuel had set up his own haunted Halloween maze under the kitchen table.
“We had to get down on the ground and crawl around at his eye level,” Hudson said. “He was telling a story through his maze. It’s been really exciting, watching him lighting up tombstones with his flashlight to making full-fledged films that are pretty intellectual.”

Plus, the McIntosh family now hosts fully developed Halloween mazes for the community every year, with themes like Texas Chainsaw Massacre or Michael Myers.
Both Samuel and his father remember one maze Samuel designed when he was 12.
“You walk into this dark room where this man is developing photos of people,” Samuel said. “You were trying to find this killer who watches people with a camera.”
People were so scared they accidentally tore down parts of the maze. David McIntosh says he thought it was a testament to how scary the maze was, but Samuel reacted differently.

“Fixing the maze took literally seven seconds, but that was the one time Samuel cried,” David McIntosh said. “Because of the time and effort he put in, it was hard for him. He wanted everyone to have a good experience because he had a good experience.”

Samuel’s enthusiasm for artistic production didn’t stop at Halloween mazes. When he was 6, he filmed his first movie, “Alien Invaders.” He says it’s still on cassette. A few years later he filmed his own gangster movie “Mobsters,” complete with paintball guns and helmets.

Anna Kate McIntosh, Samuel’s younger sister and FUHS alum, enjoyed tagging along when she was little.
“I’d try to keep a straight face,” Anna Kate said. “But sometimes Samuel would get really mad at me and say, ‘You aren’t doing this right!’ or ‘Oh my gosh, we have to start over, you keep messing it up.’ He’d leave because he was so frustrated, but he’d come back and we’d start over. When I think of it now, it makes me laugh.”

While the quality of his work has changed dramatically, little else has.
“I never want to stop being a student of film,” Samuel said. “That’s all I do. Reading screenplays and books, going to movies. I study everything and never stop. I want to be interested in this, always.”

It’s this curious, open-minded approach to both art and life that makes Samuel an effective creator. One night, Samuel was watching a movie at home when his friend came into the room with tickets to an EDM (electronic dance music) concert.
“I don’t like EDM,” Samuel said. “But he asked if I wanted to go. So we went to The Shrine at 11 p.m., and it was packed with all these drunk rich kids. I was just people-watching and walking around.”
Samuel says it’s this spontaneity that drives the creativity to be a writer, director or producer.
“This is the kind of stuff you need to do,” Samuel said. “What would happen if an entire movie took place at an EDM concert? A mystery? You can’t hear each other, or try to communicate. You don’t know what’s going on, and that’s interesting to me.”
Though the national quarantine prevents him from seeking experiences like that, Samuel is still creating. He’s halfway through writing his first feature film script, a supernatural thriller based on Haruki Murakami’s novel Killing Commendatore. The story follows the story of a Japanese portrait painter who goes into isolation after his life falls apart.

“When he finds a mysterious painting entitled ‘Killing Commendatore’ in the attic of the house he’s living in, a journey into his psyche and the spirit world begins, forcing him to face up to his own deep rooted fears and dreams,” Samuel said.

Samuel says he hasn’t developed a clear-cut process of choosing ideas to produce. But it doesn’t faze him.
“There is something not tangible to it, something I’ve been learning to trust and cooperate with,” Samuel said. “When I’m writing something, and it’s what it’s supposed to be, I’ll feel good. Other times it’s like trying to push a rock up a hill. I’ll have this idea, and I push it to the top and then the rock rolls right back down. But maybe tomorrow I’ll get a better idea.”
Samuel’s connections with figures like Mikey Alfred have helped him gain in the film industry. But Samuel also looks to relationships he made years before for insight.

“My best friend helps me produce my stuff,” Samuel said. “Tom Shields. He’s also my writing partner, and the smartest person I’ve ever met in my life. He thinks in a different way than me, and that complements our creative process.”

Samuel and Tom met in the seventh grade at Ladera Vista Junior High. Tom says the two of them hit it off immediately, but the true catalyst for both their friendship and artistic relationship was a Ladera Vista computer class.

“I could tell you the moment I knew Samuel was on the right path,” Tom said. “We had a computer class together. He was only 12 or 13, but he was always talking about editing and film and pushing himself and the boundaries. I knew this was someone who knows what he wants, what he’s doing, and how to get there.”
Tom is currently helping Samuel develop another project they hope to pitch to companies like Netflix or HBO, called “Superstar Island.” This 30-minute comedy pilot follows a famous female music group after crash landing on an abandoned island. Samuel describes it as “Spice Girls meets Lord of the Flies.”
Tom currently attends UC San Diego, studying Ecology Behavior and Evolution. He hopes to pursue a career in wildlife documentary, accrediting Samuel for inspiring him.
“I come from a science-oriented family,” Tom said. “I never really thought of things I was interested in, like artistic endeavors, as things worth doing. Seeing Samuel’s passion, and working with him, made me realize that I love this. There is value in going out and recording things for people to enjoy.”
Not only has Samuel influenced his friends in their career pathways, but has just been a good friend.
“He’s passionate, but also so kind and caring,” Tom said. “He’ll always stop to make sure you’re alright. He follows his passion, takes care of his friends and family, all while staying true to himself. There’s no reality that exists in my mind where we aren’t friends.”

Tom says that it’s because of these genuine qualities that Samuel will continue his success in the film industry.
“He’s going to be successful because he’s one of the people you want to root for,” Tom said. “You want him to succeed. There’s never been a person so driven, so smart, so passionate.”
Like Tom, David McIntosh holds little doubt that Samuel will pursue greater projects with even greater payoff.
“If somebody says, ‘You’re going to have to work really hard,’ he’s already past that,” David McIntosh said. “‘It’s going to be a hard business.’ He knows that. But he is absolutely not afraid to work his ass off.”
“He’s the kind of person you’d think, ‘I’m not gambling on this guy.’ He doesn’t have the sense that anything is beyond or below him. Is this the most viable industry? It’s not. It’s show business, and who knows? Being good doesn’t guarantee anything. But if anyone is going to make it, Samuel will be the one.”
Students can view all of Samuel’s productions on his YouTube channel “Samuel McIntosh” or follow VOID Productions on Instagram @void_prod.