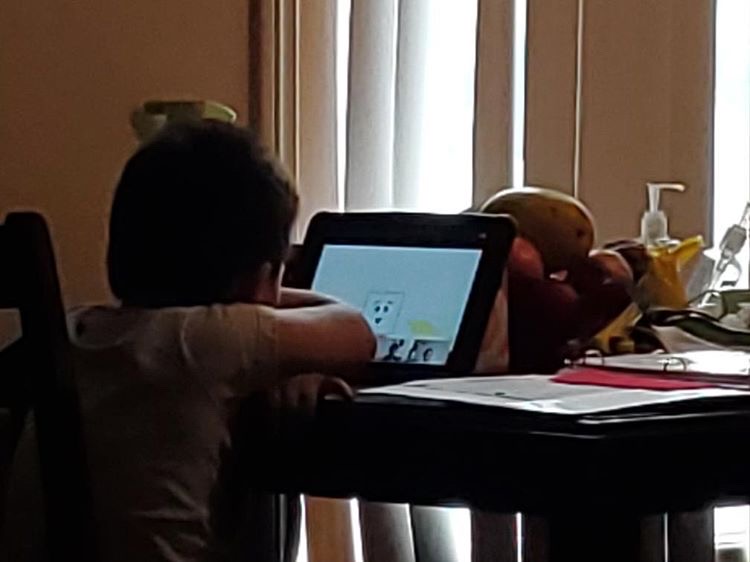 Ian, age 4, works on his iPad for his Pre-K class. Photo courtesy of Alexia Ocampo.

They said two weeks. Only two weeks and school would be back open, corona-worry-free.

Two weeks turned into seven months, leaving students like junior Alexia Ocampo with the burdens that come with being a student at home.

Alexia is the oldest of four children in the Ocampo family.

During a regular school day at home, Alexia’s 7th-grade brother Victor works in the bedroom. Her 5th-grade sister Denise works in the kitchen. Alexia works in the living room. Her Pre-K brother Ian is in the hallway when he’s not at the neighbor’s house.

Alexia is cook, tutor, tech troubleshooter, and referee for her three siblings while her mom works 8-hour shifts.

“For the past three or four years, I’ve had to carry that pressure of helping my mom out. I don’t mind, you know, but it tends to take a toll on me,” Alexia said. “It’s a lot of pressure because I have my own things to do with school and especially with all of my AP and honors classes.”

It’s a struggle having four distance learners under one roof.

“We are always having wifi issues, there’s always noise, or I need to help one of my siblings out,” she said. “It’s weird because I’m sitting right next to the actual wifi box, so every day I have something that goes wrong or glitches.”

When Alexia isn’t picking up toys, listening to her siblings bicker, or cleaning up the kitchen, she tries to focus on her own studies.

“In the early morning it’s not as distracting. My siblings don’t have school until 8:00 and I have a zero period,” Alexia said. “But towards the afternoon it gets more distracting because they start getting off their classes and we all have to manage being in the apartment at once. It isn’t a big space so there’s usually a lot of distractions.”

Alexia says she knew junior year would be academically challenging, but she’s disappointed that everyone is so isolated.

“I was also expecting [junior year] to be where I could be more social since I am a shy person,” Alexia said.

She’s sad about the pandemic but she doesn’t resent her siblings.

“I’m doing my work while helping them,” Alexia said. “Like today, during first period, we were released early to go do work on Google Classroom, but I had my little brother next to me so while I was doing my math, I was helping him with his Pre-K class.”

They try to stick to a routine, but it’s hard.

“It’s harder on Wednesdays because we do have shorter days and my siblings, like my little brother, he’s 4 and in Pre-K so he only has 40 minutes of class to do. My sister works until 10:00, and my brother works only until 9:00 since he only has to go to homeroom,” Alexia said. “So it’s a bit harder because I still have three hours when everyone is home and I’m the only one doing work.”

The most chaotic time for her is around 8 a.m. when she, Victor and Denise are all in class. It’s hard for Alexia to stay focused when she hears her siblings’ teachers on Zoom. Then she’ll hear Ian crying and fussing as he’s just waking up for his school day.

Alexia wakes up at 6:30 a.m. for her zero period photo class. She’ll go outside to take pictures but she admits she uses some of that time to wake up her siblings.

Alexia is scheduled to try hybrid learning starting Nov. 2, but unless her siblings’ schedules can sync with hers, she might need to stay with Distance Learning full time.

“I think I’m definitely ready to try out hybrid mode, you know, like at first I was very doubtful about going back because there’s still risk and I didn’t want to bring those risks back here,” Alexia said.

She says she knows the school has done its best, but she wishes the school district would require less Zoom time every day.

“I feel like the school should have thought about people in different situations because a lot of people are maybe in the same situation as me,” Alexia said, “where it’s just harder for them, you know, with having so many distractions and having siblings and having to be the one taking care of them.”