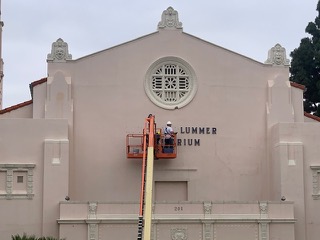 The FJUHSD school board voted unanimously on June 16 to remove the name “Louis E. Plummer” from its district auditorium after hearing evidence that Plummer was a member of the Ku Klux Klan in the 1930s. Just two days later, the name was gone.

According to board member Marilyn Buchi, construction equipment being used for Fullerton High School’s new gym was nearby, so it was convenient to have a district crew remove the name from the building’s facade that same week.

“They had the big crane that could reach up and remove the name,” Buchi said. “I was surprised at how quickly it happened, but certainly that made sense not to have to hire someone to come out and do it.”

Plummer was principal for both Fullerton High School and Fullerton College as well as the superintendent of the Fullerton district. Plummer’s affiliation with the KKK is not a new controversy, but the Black Lives Matter summer protests moved the issue of racial justice to the fore.

Currently there is no plan to rename the building but many names have been suggested by the community. Some include The Griff and Jan Duncan Auditorium, The Alex Bernal Auditorium, and The Fullerton Auditorium.

What prompted the school board to remove the Plummer name this summer?

School board member Joanne Fawley: The change.org petition ultimately had over 27,000 signatures which is really significant. If you take a look at change.org most don’t get close to that. It was really quite a ground swell of people, many of whom in the comments, and I read all the comments on change.org, spoke of how they were a student in the district or graduate of the district or lived in the community. So it wasn’t because the issue reached a super wide geographic area of people who just thought, ‘I hate the KKK.’ It really was locally driven despite the wide accessibility on change.org.

What research was done to prove that Plummer was part of the KKK?

Fawley: That is challenging because it isn’t like the KKK kept membership lists and had you sign into the meetings and made you check out your cloak. I’m not trying to be flip, but I think you know what I mean. It’s a secret organization, and we are talking about 100 years ago so that also creates a challenge. There has been some research done on KKK activity in Orange County. There were active groups and at one point KKK members held the majority on the Anaheim City Council, for example. […]The main source is a doctoral dissertation from a student at UCLA. A doctoral dissertation is an immense research project where you have to back up all your sources and then to earn your doctorate you have to defend your dissertation.

School board member Marilyn Buchi: At that time it was in the 20s and 30s and there were two groups. There was one in Brea: workers who came to work in the oil fields and there was one in Fullerton and Anaheim that was more related to the church which is kind of interesting. [The Fullerton-Anaheim group] was looking at the kids being good kids and stuff like that. Almost all the city council in Anaheim were members of the KKK and a lot of the Fullerton City Council were part of the KKK. It almost looked like, this sounds terrible, but a club to belong to if you were prominent in the community.

Were there people opposed to the name removal?

Buchi: We got letters from people who were opposed to the renaming. Actually, the [former FUHS] librarian Diane Oestriech was one of them. She had done enough research that I think she found that he was a good person. He really was 100% for the students and he certainly had great accomplishments. Another woman who was prominent in the community, city council, and Fullerton College, was against it. A former state legislator, we got a letter from him and other people. Prominent people in the City of Fullerton didn’t think the name should be removed because of the good things that he did. But, by far, the majority of the communications we got were in opposition to the name.

How will this change benefit the school and community?

School Board president Andy Montoya: Change is always hard for a lot of people. Changing the name of a building feels almost like it’s erasing history or erasing something that’s been nostalgic or something that has been forever. For example, all the yearbooks say Plummer Auditorium but if you take away the name Plummer, is it taking away all those memories and the history of it? What we are trying to say is, no. We want to keep the history, but we want the history to be accurate. We don’t want there to be a time when we accept the name of one of our buildings to be a name of somebody associated with the KKK.

If there was just one student that felt uncomfortable walking into the auditorium because of the name, that is worth us taking the name off.