Gym construction ahead of schedule 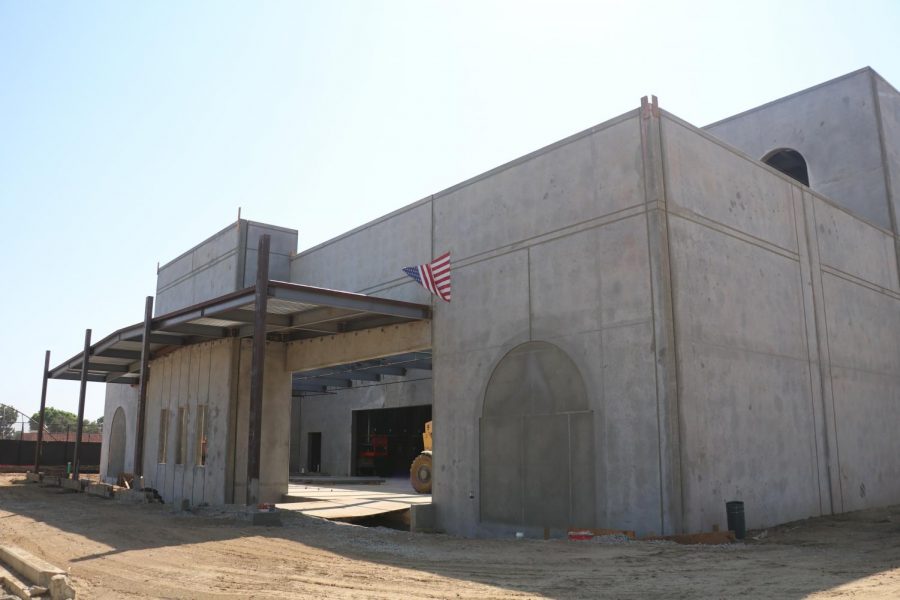 “Maintaining the look of the campus was important and can be seen in the archways at the front of the gym,” said construction lead Troy Shandy. Photo by Arashk Alivandi.

Though the school has been closed for seven months, construction workers are ahead of schedule in their work on the new FUHS gymnasium.
Principal Laura Rubio hopes construction will be completed by May, allowing seniors an opportunity to use the new gym before graduation.
“I’m really hopeful, and so is our superintendent, so hopefully it keeps going this way,” Rubio said. “I’ve already started choosing colors, the bleachers and what’s going up on the walls. We’re starting to talk about it. It’s coming.”
Rubio said the walls were put up three weeks ahead of schedule.
“Usually construction projects like this on a campus have to maneuver around students, staff and the parking area,” Rubio said. “I’ve been involved in construction projects before where it might be finals, and they can’t do anything for three days because they have to be quiet. With the pandemic, there’s been none of that.”
According to construction lead Troy Shandy, the new gym will incorporate many of the same architectural styles as the rest of the school to ensure it blends with the current buildings.
“The most interesting and different aspect of this project has been building on a site that is over 100 years old and has experienced numerous changes to the area over the years,” Shandy said. “Maintaining the look of the campus was important and can be seen in the archways at the front of the gym.”
Overall, construction has proceeded smoothly, though there were some small complications. For example, Union Street at one time ran all the way through to Lemon.
“There were several underground utilities that had to be moved that had been part of the old neighborhood,” Shandy said. “That was a complicated effort but it’s now complete.”
While the gym is under construction, FUHS athletes are finding ways to workout. The basketball team uses Sonora High School’s gym for practice. The basketball team is following the 30-person limit for gym occupancy under the COVID-19 safety guidelines. Each player also brings his own ball for dribbling drills.