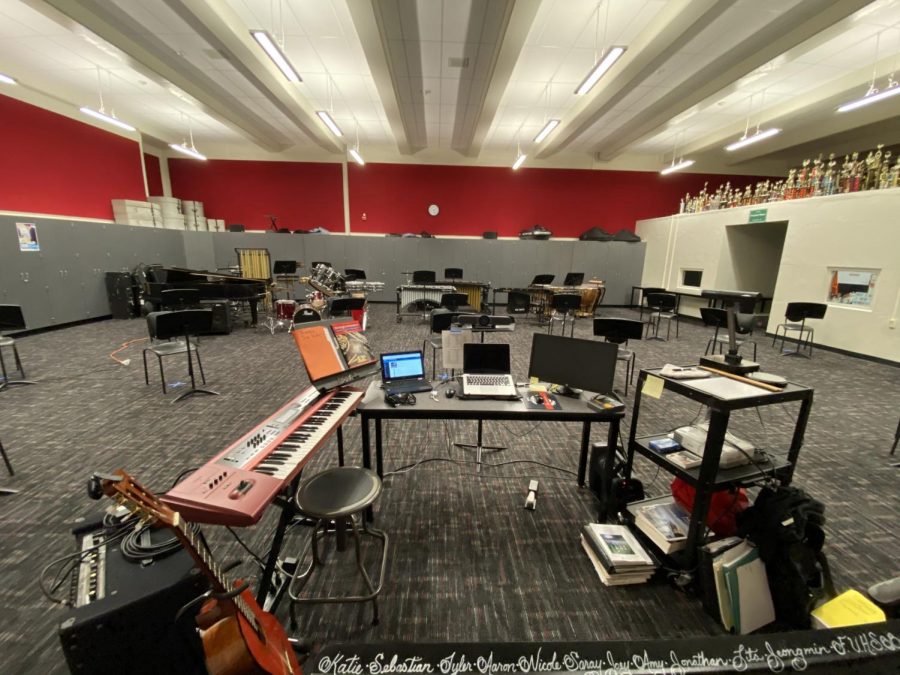 What does a tuba and a lawsuit have in common?

Answer: Everyone is relieved when the case is closed.

As a tuba player for the marching band, I’ve heard plenty of cheesy jokes. True, the tuba is not the most popular instrument, but for two years I’d grown to love practice on the FUHS football field.

And, for me, there’s no Zero Period music, either. With my 14-year-old brother still asleep and my dad on Zoom calls, running through a tuba scale and arpeggio routine at 7 a.m. just doesn’t work for my household–or for my neighbors.

And I’m not alone. The entire instrumental program is in the same boat.

The band has been invited to Thursday rehearsals, but most instruction is still online.

What do you miss most about teaching music in person?

It’s just being able to say “hello” [to students] and seeing their faces and all the little mannerisms. It’s so difficult over Zoom to get a grasp. Like, are you mad? Are you sad? Are you okay, anything happening? Because you care so much as a teacher just to know if your students are all right. I also think the second thing is just hearing music and having them play together. Hearing them play individually on Zoom and doing one-on-one stuff is just not close at all to anything. It’s not individual music learning; it’s band. That word means a group together and I think a lot of people are figuring that out. You have to play your part, but your part is one of many. So even if you play your part great, you’re still sitting in a room hearing just the baseline, and there’s very little overall satisfaction.

What’s missing through Zoom in a music class?

I’m thinking that with my freshmen there’s so much that you learn from playing with returners right now that I’m struggling with. You can work through your fingers and your notes, especially your chromatic scale with people who may not be so well versed with that stuff. Your peers help you out so much. You’re sitting next to someone who’s giving you tips and feedback while you’re playing and even while you’re listening. That’s so, so important and now they don’t have that. You’ll just be sitting there playing your part and either thinking you’re doing a great job or you’re horrible. You really have no one to bounce it off of. And I think it goes both ways. When you know what you’re doing and you’re a little more advanced it definitely holds you to a higher standard because you’re like “oh, I guess I’m not hitting that note” or “I guess I’ve never really heard myself in that tone before” whereas if you’re lost you’re even more lost.

As a teacher it’s frustrating; you don’t know what else to do. I only have [each class] for 40 minutes. And another thing is some people in Zero Period or First Period can’t even play during class. And that’s a worry I have. I’m looking forward to going back to hybrid and just being able to play in the morning because we’ll be in a room where we won’t have to worry about waking up your family members who are on the other side of a wall.

Is there anything good that’s come out of this?

There’s a lot more accountability since you’re hearing yourself. I want to try to bottle this and use it for the future since there’s no way to hide if you’re by yourself, and it keeps you honest.

What safety protocols will you need to implement when students arrive for hybrid learning?

There’s a couple things we have planned. We’re going to have instrument bell covers for brass, and anybody who plays a wind instrument will have the masks that open up so that you can have the mask on and play. It keeps as much as it can from going outside of the mouthpiece. I know that we would have to have pads on the ground for the water keys and spit valves. I know it sounds silly, but that’s something we have to think about. For brass players you would normally empty your spit valve on the floor, but that’s a big risk. They’re still recommending six feet distance but for whatever reason trombones are recommended nine feet distance. We can’t rehearse inside without these guidelines. It would be really against the rules.

What’s going to happen to people who share instruments?

We’re lucky enough to have enough instruments, even though we wish some of them were in better condition. The only instruments we ever really shared the past couple of years has been the baritone saxophone, so the school’s still looking to help us buy one for this year, which we need anyway. Between Jazz Band and Marching Band and Concert Band, we can’t share at all. We can’t even contemplate sharing an instrument.

How has the way you’ve approached teaching music changed this year?

The biggest thing is not knowing what we will be able to do. For instance, are we going to be able to gather together to do a show? Or are we going to be able to get a concert going at some point? All these things matter and it really changes your whole plan. I think the toughest thing is that we don’t know for sure when it will be over or when it will change. I have to do my job completely differently. It’s scary, it’s anxiety-inducing. I know a lot of teachers feel the same way. Week by week, everything has changed, the curriculum has changed and we must go through things a lot slower.

What can we as students do to make a teacher’s job easier?

It’s stressful for students, it’s stressful for families, it’s just tough. The best thing students and parents can do for teachers is just be as understanding as possible. In the beginning, it was hard because so many people were asking, “What’s happening, what’s happening,” and I had to literally say, “I don’t know, and I probably won’t know tomorrow or the day after either.”

What will Marching Band do with no school activities?

I had parents coming to me and saying, “There are no football games, what’s the point?” That’s valid, that’s one of the many things we do, but don’t we have competitions? Don’t we do things outside of sports? The answer, I think, is it’s just like Concert Band, it’s just like Jazz Band, it’s just a performing group. We’re here to play music. Students sign up for the class because they enjoy doing this, so how can we use this in our new setting? So for me it just became a question if we can create videos you see online, how can we connect to what’s happening today and make it relevant. How can we make this something that means something to us? Should we just be here to entertain? Not trying to save the world or anything, but just trying to make it relevant and fun. I think our goal when we come back is to still be present because we need to be part of what’s normal. Because when we do get back together—the band, cheerleaders—all the normal things are what people will want to see, so our job is to still be ready to do those normal things. I think it’s a great opportunity for the band as a whole, whether it be band directors, choir directors, whoever, to start to rethink the norms of what we do. We need to evolve, that’s for sure.