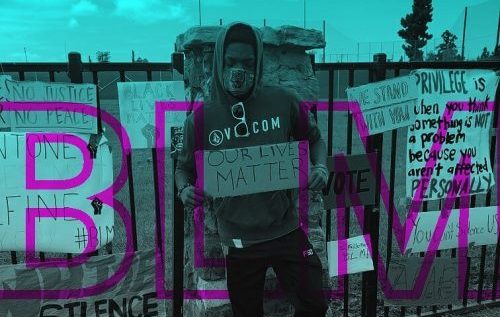 Junior Macio Tinsley knows that he shouldn’t do some of the harmless stuff other students his age can do.

“My uncle tells me how I can’t do certain things,” Tinsley said. “Like when my friends do things I have to pretty much watch out for myself because I’m a young Black man and cops won’t really see you the same way.”

“Say me and my friends are about to hop a fence and a cop rolls by, I wouldn’t do it,” Tinsley said. His white friends, however, don’t think twice about going over a fence as a shortcut to play basketball at a nearby park.

Tinsley, who went to elementary and junior high in Whittier, says he hasn’t faced overt racism in school. “I haven’t been racially profiled or anything, but I feel like I see the world differently because of what’s happening right now.”

In March, Kentucky police killed Breonna Taylor in her home.

In May, a Minneapolis police officer killed George Floyd.

According to CBS news, 164 Black Americans were killed by police from January through August this year, resulting in the resurgence of the Black Lives Matter movement.

Many FUHS students attended protests and engaged in social media discussions to bring more awareness to police brutality and systemic racism. And closer to home, students were voicing their desire to change the name on the district’s Plummer Auditorium because Louis E. Plummer was a suspected KKK member.

Junior Kaci Butler said she spent more time being active on social media during the summer, posting about the movement on her Instagram story. For example, Kaci posted a black square in support of the movement June 2 along with the caption “#blackouttuesday.”

Butler said she strived to have civil discussions with her followers about the topic. “I feel like acknowledging it, knowing where you stand, and talking about it with your followers is very important,” she said.

She was one of the very few Black people in her elementary school in a predominantly white neighborhood.

“People tell me that I am whitewashed or I act so white for a Black girl,” Butler said. “Someone said that I might as well bleach my skin because I act white enough, which is like in reality racist because they’re implying that all Black people should be ghetto or hood rats.”

She says racist jokes have become the norm.

“Another memory I have is in eighth grade. I was taking the bus to school and someone was saying very racist jokes,” Butler said. “For example he compared an elevator to a Black person but proceeded to say that an elevator can raise kids unlike Black people.”

Senior Jeffrey Ilerne moved to Florida when he was 5 and lived there until December 2017, his freshman year, when he moved to California.

“[Florida] was so negative and people didn’t make you feel good down there. That’s why the good ones will tell you they want to move out so badly because it’s a bad environment,” Ilerne said.

“Back in Florida I would have to be tough, stand my ground, worry about other people trying to attack me for no reason verbally or physically,” he said.

Ilerne said that moving to Fullerton has been a blessing, especially meeting theater teacher Michael Despars his freshman year.

Despite feeling safer, he still faces problems as a young Black man.

“At times I just felt like giving up because it was just so much, but I think now is the time to reflect and think about what you are doing and just keep moving forward,” he said.

Ilerne used his many platforms as a resource to inform people about the BLM movement. On his  podcast “The Flame Nation” he discusses various topics like politics, gaming and entertainment.

“Back then when it was happening during the summer I tried to keep my platform not really political,” Ilerne said. “Now after everything has happened with Breonna Taylor, I had to. I was done and I just talked about it on my podcast because this needs to be said everywhere.”

The rampant discrimination against people of color is being called out worldwide, and supporters of the BLM are demanding change, including  junior Alexa Gutierrez.

“With something like this, we should already be even or equal with each other. It’s just an eye-opener,” said Gutierrez, who attended several protests this summer.

“On social media, there was a lot of chaos going on and I was a little bit worried about something going wrong at a protest or getting in trouble. But then I was like no, I need to show my support, so I went and protested,” said Gutierrez, who attended a June 6 protest in downtown Fullerton in front of City Hall, across from the Fullerton police station.

About 1,500 people, including several students from Troy and Fullerton High School, attended the peaceful protest that was pre-approved by the Fullerton police department.

Gutierrez was impressed with the diverse group and appreciated that protesters took necessary steps to stay safe.

“Everyone was really nice to each other and was making sure we were taking safety measures, considering there’s COVID,” Gutierrez said. “Everyone had their face mask on, unless people were drinking water or eating.”

Ilerne and Tinsley didn’t attend the same protest, but both said they were also impressed with the range of ages and ethnicities who protested for change to help the Black community.

Tinsley, who attended a march in La Mirada, said, “It was kind of crazy because it wasn’t only Black people. It was really diverse, there were white people, Mexican, and Asian.”

Ilerne attended the Fullerton protests. “Everybody there was united,” he said. “That was more of a teary-eye moment because it was really shocking. I felt the passion.”