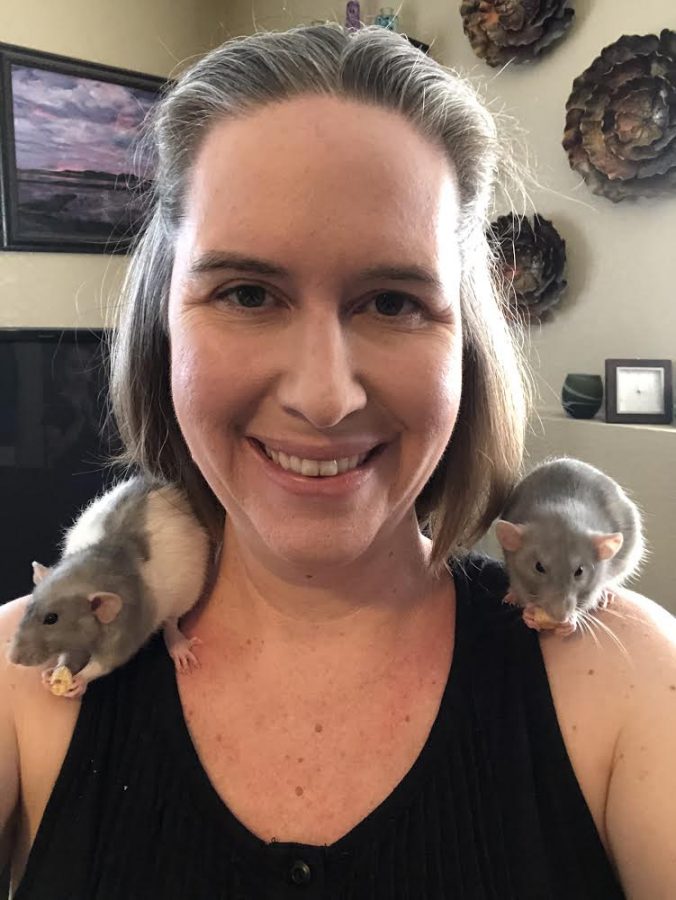 Evelyn Smith, age 8, has taken advantage of her time home during the pandemic. She’s done a lot of reading and even adopted two pets.

The third grader is up to book No. 26 in the Warrior Cats series, and she decided Silverstream and Bluestar (cat characters from Warriors) would be great names for the family’s two new rats.

Her mom, FUHS psychology teacher Nicole Smith, says the female rats have been a wonderful addition to the family.

“They’re adorable, but they need time to run around, and that forces us every day—even if we’re tired or busy—to take time to sit in the room together as a family and let ‘the girls’ out and run around,” Smith said. “We have to supervise because they try to go everywhere, but it gives us time to hang around each other and have a good time.”

“I’m not saying you should go out and get a pet because it will make you happier, but it really has been something good for all of us,” she said.

In addition to being responsible for new animals, Evelyn and her brother Matthew, age 5, have been doing Distance Learning while their parents work from home.

As a parent, Smith says there have been challenges but is impressed with how self-sufficient and responsible her children have become.

“My daughter is totally responsible for herself,” said Smith about the third grader. “[Evelyn] has a Chromebook. She can log in to all of her programs. She can get into her Google Meets. She takes care of getting all of her work done, and where her books and notebooks are. It’s all her. I’m double checking her Google Classroom, and she’s turning everything in.”

Her son is taking kindergarten online.

“The teacher gives him a list of materials they need for the day, and I make sure they are out,” Smith said. “I have this tiny desk—like a little side table—that I put in his room with a folding chair.”

Matthew starts school at 8:30 a.m., and by then everyone else in the family is already in a meeting.

Smith says that taking ownership in their learning has been good for her children and she sees it working for some of her high school students, too.

“There is a lot of data out there showing that we need to give kids responsibility. Have you heard of helicopter parents? Like they just want to do everything for their kids and that’s not always good. So, with my kids, it’s taken some training and it’s not perfect. This is a hard life. I wouldn’t choose it, but given that we’re here, we are able to teach some skills that maybe we wouldn’t have paid attention to before. We wouldn’t have, you know, gone to the trouble of teaching ‘you’re going to need to learn how to make your own snack’ or ‘you’re going to learn how to find this thing.’”

Her kids’ school has reopened for hybrid learning, but, for now, Evelyn and Matthew will stay with Distance Learning.

“My kids understand. You have to think about what school is actually going to look like. You wear a mask. You can’t sit next to your friends. You can’t play on the playground. You know, when we start talking to them about those details, they get it. They miss their friends and want to go back to regular school, but they certainly don’t want to go back to ‘pandemic school.’”

Smith says she’s been able to manage teaching her own classes, but things are still tough. She and her husband are working “many more hours” than they usually do.

Every teaching task now includes multiple clicks on a computer.

“It’s tons more difficult,” she said. “I think people who aren’t teachers can’t even grasp how long some of this stuff takes. It’s like being a new teacher all over again.”

Smith has been able to adapt most of her psychology materials.

“I have mostly the same slide presentations, and I post all five on Sunday that we’re going to cover throughout the week. I tell my students they can print them or they can save a copy for themselves [for taking notes].

“And sometimes I ask my students to answer things in the chat, like, ‘Do you understand the difference between positive and negative skew? Here’s a graph. Put it in a private chat to me telling me which it is.’”

“Not only does it create a more classroom-like atmosphere, but also allows students to easily ask her questions,” Liu said.

Senior Irene Cheon said, “I think the anonymity is beneficial, especially for students who are a little less confident when asking questions in front of other classmates.”

One upside during Distance Learning is that Smith has seen an improvement in overall attendance.

“So that’s why I try to be more interactive, and I know that some students don’t want to talk and unmute themselves and say something during class. I have some students willing to [turn on their Zoom cameras], but how do you get everybody involved when you can’t see most of them?”

Despite seeing a lot of small black Zoom boxes most days, Smith says she’s seen an increase in the percentage of students actually doing their work during Distance Learning.

“Students are logging in and doing what I ask them to do. It’s impressive, incredibly impressive.”