Student service should be celebrated 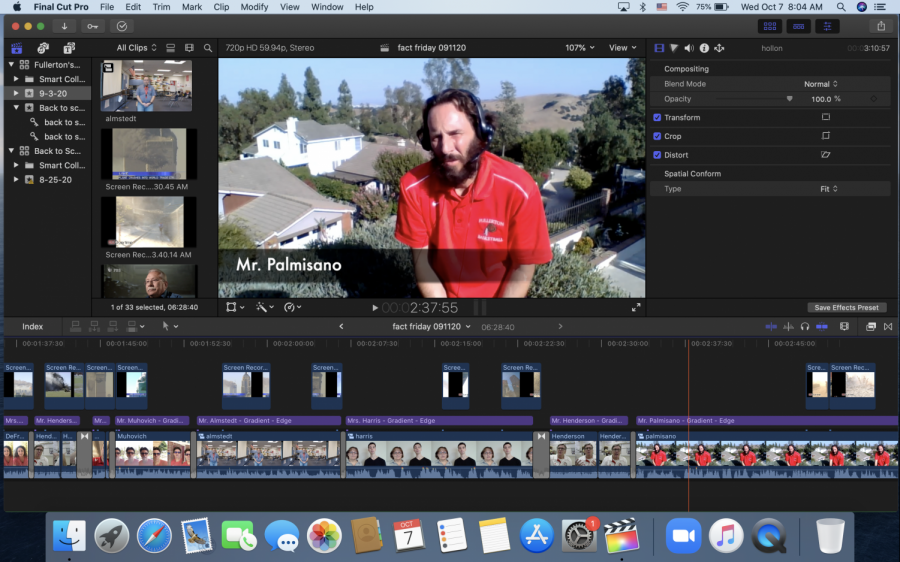 Everyone should watch this video
To honor the 2,977 Americans killed during the Sept. 11 terrorist attacks, ASB member Irene Cheon, a senior, created an amazingly emotional video using clips of teacher recollections.

I hadn’t even been born yet in 2001, but this part of our history was life changing for our families and our teachers.

As I watched the ASB video, one thing I noticed was how the teachers—no matter their ages or backgrounds—shared this tragedy. That made me realize that there’s something about sharing that we’re missing due to distance learning.

Second period teachers shared a video on Thursday about earthquake safety. If teachers can share that, I hope that more teachers will carve out time to share ASB, dance, cheer and choir videos because Irene’s 9/11 video as of Oct. 15 had only 537 views. That number should be higher. A lot higher.

Even with the difficulty of distance learning making everything slower, Irene still put together a powerful video using clips of teacher monologues. And not just any monologues, but highly personal videos explaining exactly when and where they were on September 11.

Irene, armed with ASB’s Macbook Pro, got to work. She listened and skillfully sorted the videos. Irene told me, “I just took the important parts where it really had that pivot. I clumped the answers based on how old they were, or where they were, how it happened, how they saw it. I think in those situations, one word answers are completely fine. For those, I just took out a second where they said one word and it still had an impact.”

And impact it did. Trimming some videos to one word, she showed how powerful just one word statements can be. She even sped up many of the teachers’ clips to make the video flow better without making them sound high pitched or unnatural.

Irene Cheon created a perfectly formatted video while many kids struggle to get their regular classwork done on time; she does this on top of everything else. She is a wonderful example of student spirit and hard work that we value here at FUHS.

When I watched it, it was very emotional. Many teachers were at work or at home when they heard about the attacks. Specifically, social studies teacher Sharon Hollon had a powerful story. She explained that her husband was working in Washington D.C. at the time and that it could have been very possible that if the brave people on board Flight 93 had not brought down the plane, he could have lost his life.

Irene said, “I didn’t know it would be so emotionally charged. I think it had a more surprising element to it than anyone had expected, to be honest.”

ASB’s Video Production Team, led by Irene, soon will post a video explaining the safety protocols for hybrid learning. And although her entire committee is working together, Irene is the one in charge.

ASB adviser David Shanebeck said: “Irene delegates, trains, and builds up her group at every opportunity. It has been such a joy to watch Irene take ownership for her role and really grow as a leader at every turn.”

As I was putting together this story, I asked Irene for a photo. She sent a couple of screenshots of her work, but she didn’t want to send a photo of herself. I think that says a lot; she works really hard and is okay with not having her face on the front of everything.

She doesn’t see herself as a tech genius or even a tech nerd. Irene doesn’t host a podcast or create her own youtube videos. It’s unlikely her video editing skills will help in her future career. That’s what makes what she does even more important. She does this for ASB. She does this for us.

In return, we should accept her generosity of service with a thank you.

And we should ask our school officials to please find some way to carve out more time for sharing during our very long school days. If all of us had more time to share things like this video, maybe we wouldn’t feel quite so distant from what really matters.
JROTC color guard team shows consistency, class
ASB worked with JROTC to produce the 9/11 video, and a well-deserved shoutout goes to JROTC for the color guard ceremony featured in the first few minutes of the video.

Normally, the color guard trains daily to perform facing movements, smooth transitions between commands, and proper flag and rifle responsibilities. However, the team had been away from practice for months when they got the call to be a part of the video.

Color guard commander Julia Bustamante arrived early to set up flags and rifles that had been stored since March.

“The team did have to run through the ceremony a few times, but fortunately it becomes muscle memory from so much practicing,” Bustamante said. “I was really proud of the team.”

JROTC videographer David Salinas worked with ASB to get different angles of the flag ceremony with four run-throughs.

“The ripple effect from [the Sept. 11 attack], and the following actions and consequences that have resulted continue to touch everyone,” Albertson said. “We fought, and continue to fight, the Global War on Terror because of the attacks on 9/11. When I think of all the lives that have been lost, and the treasure that has been spent trying to keep America safe, it really boggles the mind, leaves me speechless, and more than a little sad.”