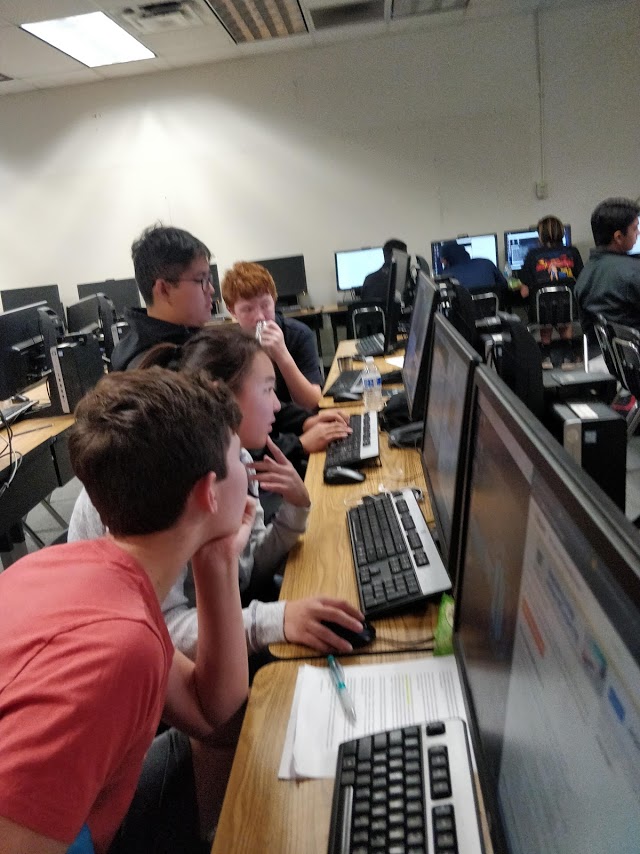 In August, Carnival Cruise faced a cyber attack, potentially revealing the personal information of the company’s employees and customers.

Cyber attacks like these are creating a high demand for skilled cybersecurity technicians throughout the world.

To prepare to meet this growing need, the Fullerton High School JROTC Cyber Security Team is competing with other schools to practice their skills at detecting computer breaches and identifying hackers.

The 13-member team is scheduled to compete in the Air Force Association (AFA) CyberPatriot competition Nov. 13-15. The AFA promotes careers in cybersecurity and STEM by hosting state and national competitions.

According to Sean Finch, Commander of the team, the pandemic has created one silver lining.

“Since most kids have a computer at home, I think practice is about the same,” Finch said. “If not, then it’s even easier since you know your own computer better than a school’s computer.”

To accommodate students competing in their own homes, AFA sends out a program called the Oracle Box. This program is like an overlay of a virtual computer on the competitors’ own computers at home.

Sophomore Wyatt Carter says the Oracle Box is like having a new computer.

“It’s completely fresh except for what they did to tamper with it and so we have to go through it and find any potential weaknesses and fix those weaknesses for six hours,” Carter said.

They’re basically detectives looking for clues but instead of a magnifying glass and a mustache, they have computers and maybe some blue-light blocking glasses for when they stare at their screens for six hours.

Being on a computer for even only a few hours can be mentally and physically draining, and as of right now, almost everybody can relate to that statement.

“We say if your brain starts to feel like goo or your eyes can’t focus on what you’re reading, step outside for some water or play a video game on your phone for like 3 or 4 minutes and come back inside,” Gong said.

In a competition, competitors try to earn as many points as possible then the team gets scored overall and placed in a tier: bronze, silver, gold and platinum. The teams with a score in the top 25% of the platinum tier have a chance to compete in Nationals.

Finch says many people score 100% in the first round.

“Someone who’s studied cybersecurity for only a month can be successful in the first round,” Finch said. “The tasks become more challenging in the semi-finals and so on.”

The JROTC cybersecurity program is striving for Nationals this year. Last year they placed in the platinum tier but their score was just out of reach to qualify for Nationals.

Finch says people can apply things from the CyberPatriot program to their personal computer use.

“One thing I turned off was remote desktop at the top which basically allows other computers to grant access to your computer without having permission,” Finch said. “All someone needs is your public IP (internet protocol) which identifies your computer.”

Finch says that one of the best ways consumers can protect themselves is by changing a few simple settings.

“Big data companies like Apple, Google and Facebook sell [your data] to individual advertisers,” he said. “They’re using your data as currency which is not a good thing, so you should always turn off personal ad tracking.”

Finch, who is also president of the Cyber Security Club, hopes to grow the program and interest in cybersecurity at Fullerton High School.

“I’m really interested in computers and that’s what I want to pursue as a job,” he said. “I saw the opportunity to join the cyber team at Fullerton, so I’m like, okay, I got to build this program. I got to make this the best program that there is.”