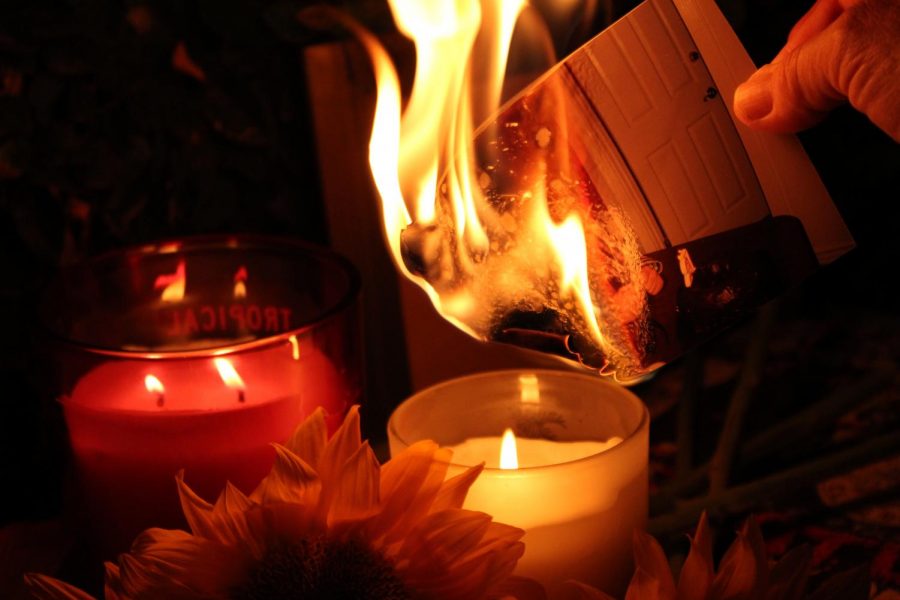 Junior AP Photography student Elyse Gonzales missed using the professional cameras and the FUHS mini-studio, but that didn’t stop her or her classmates from creating thought-provoking and emotional pieces for their recent Day of the Dead projects.

“I set up a plain background in my room and I got any props I could use together,” Gonzales said. “I just set up a light in front of me and set a timer on my phone because I don’t have a camera. Then I put on some skeleton makeup and took another picture.”

Gonzales is just one of the many students from Advanced Photography, AP Studio Photography and AP Studio Art who worked together to create pieces for the Ofrendas virtual gallery show released on Nov. 4.

To convey the connections we have with our past loved ones, Gonzales used a multiple exposure technique to make two images of herself in one picture using a phone app called Picsart.

“I took the two pictures and overlaid them and made one of them more transparent to give it a spirit sort of feeling and just edited it with filters,” she said. “I originally went to Olvera street actually and took a lot of pictures, but I ended up not using any of them. I guess I just decided, in the moment, to do a self-portrait in my room and just went with it.”

Día de los Muertos, also known as the Day of the Dead, celebrates loved ones who have passed away. Photography teacher Maggie Crail took time to teach students how to highlight the holiday with respect as it is often misinterpreted as a “Mexican Halloween.”

“Candles are often placed on an ofrenda; the light of their flames help deceased family members find their way back to

AP Studio art student Jiyoung Lee took about eight hours to complete her project. She first drew a thumbnail sketch and then moved it to her laptop to paint it with Photoshop.

“My main focus was lighting and making viewers feel the mood and atmosphere created on the Day of the Dead as I felt the first impression of this tradition,” Lee said. “I tried to make this look warm and joyful.”

Junior Hannah Torres used a more traditional Mexican style for her work. Her drawing shows a hand holding a flower with bright and vivid colors.

“The three birds represented a mother, father and a child. Those parents will eventually pass away but the child will always remember them,” Torres said. “The cycle will continue but those parents will not be forgotten because their child kept the memories going.”

Torres said she sees the marigold as the iconic feature of Día de los Muertos.

“It is used to create a path for the dead to come to the world of the living and it just brightens everything. A marigold flower has a orange gold tint that I think is really enchanting and I wanted to emphasize that magic feeling that you get when celebrating and being around the people you love.”

Torres said she wanted to exaggerate the floral designs surrounding the focal point to really give life to the piece and to show that with all life comes death.

“I wanted to make the death not scary, but more welcoming because in the Mexican culture death isn’t scary, it’s celebrated,” she said.