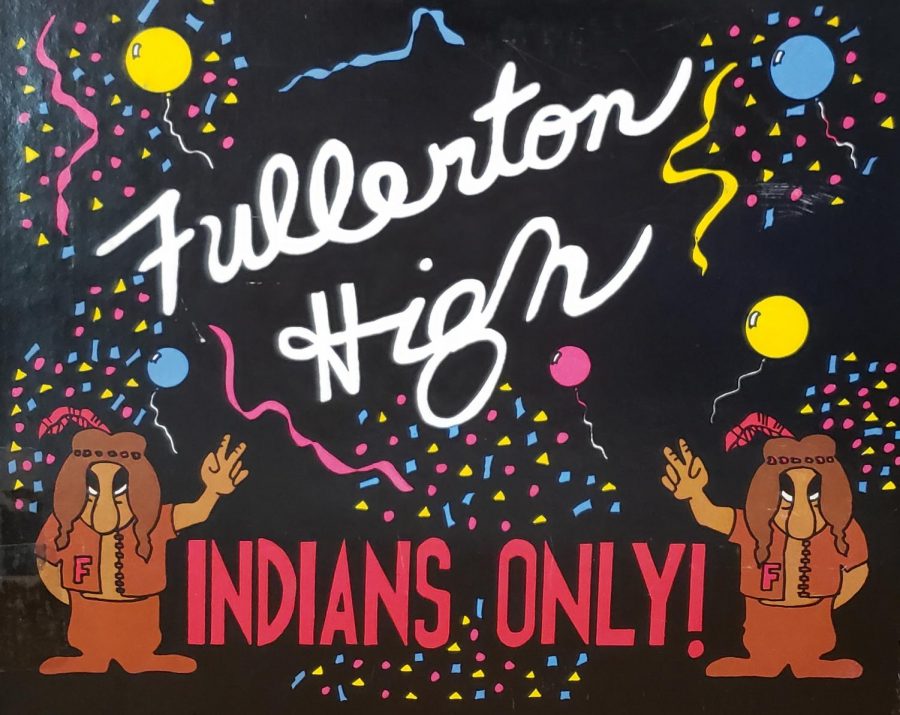 The FUHS Indian mascot has a long history of racial stereotyping. Photo by Arashk Alivandi.

Dan Snyder, owner of Washington’s NFL team, said for 20 years that he would never change the name of the “Washington Redskins.”

Snyder argued that changing the name would be an insult to his own father who introduced him to the team when he was a boy. He could not accept that his childhood memories were racist.

But with social media amplifying Native voices this summer, Snyder finally caved. It came down to money. Nike refused to sell “Redskins” merchandise as other corporate sponsors demanded change.

When the Redskins name was retired, I wondered if Fullerton’s Indian name could be the next to go. Of course, the term Indians is not nearly as racist as Redskins, but I still cringe a little.

As editor of the school newspaper, I felt compelled to start asking questions.

A few people reluctantly voiced their views, but for the most part there’s a tacit gag order. No one’s talking.

Principal Laura Rubio said that she can see both sides of the name change argument.

“I definitely understand that [our mascot] makes a lot of us uncomfortable, but we also have to be respectful of the traditions,” Rubio said. “I have talked to the OC Indian Center within the last month and I know that there are even conflicts between them and how they are approaching this mascot issue that is going across our nation right now.”

Tribe Tribune sports editor Jeremy Maldonado said many athletes believe that by calling ourselves the “Indians” we are placing Native Americans in a position of respect.

From Maldonado’s perspective as an athlete, the “Tribe Pride” that comes from the Indian mascot brings students together.

“When you give a school that sense of a tribe, it shows students they’re somewhere that they belong,” Maldonado said.

But freshman Katherine Martinez, a Tribe Tribune staff writer, almost chose not to come to Fullerton High School because of the mascot.

“When I first walked into Fullerton for orientation and I saw the mural, I was honestly embarrassed and extremely uncomfortable,” Martinez said. “And I’m not indigenous, so I can’t even imagine how they would feel.”

And it used to be worse.

Before 2001, a student would dress as an Indian for football games and call themselves Willie Ugh. This mascot was removed after protests, but our school has never really found a substitute.

Yes, we have the buffalo, but it’s different.

“I just think we need to come up with more creative ways to try to incorporate the buffalo more because it’s not really our mascot and that makes it a little difficult to find creative ways to use it,” Rubio said. “I think we could definitely come up with different ways of using it, but we still have a long way to go on that I think.”

To be completely honest, I too have mixed feelings about changing our mascot. If someone interviewed me about it, I might just have the same kind of noncommittal response as many of the staff members that I talked to had.

In many ways, our mascot perpetuates racial stereotypes. And it’s embarrassing. The name Indian was originally a mistake. Explorers mislabeled the Americas India and the Americas’ inhabitants Indians. Perpetuating a mistake reflects poorly on an educational institution.

Pile on immature high school students who make fun of everything, and I’m not sure an Indian mascot can be treated with respect. I almost came down on the side of a new mascot.

Then I remembered a soccer game I attended last winter.

I expected students to laugh or joke about it as they would with any assembly performance. But they didn’t.

Instead, reactions were overwhelmingly positive.

“That’s so cool,” one student said. “What was the name of this dance again? I want to Google it later.”

“Dude, he’s actually singing while he’s dancing,” another said. “Literally how? I can barely breathe while I dance.”

That enthusiasm for Native American culture would be lost were we to abandon our mascot just because other institutions are abandoning theirs.

I don’t know what all that means for our school and our Indian mascot, but whether we keep it or not, we can’t ignore it anymore.

Our school and our district should take the initiative to reach a decision and defend that decision. Otherwise, I fear that some media influencer is going to take on the FUHS Indian as a cause and pressure the district into making a decision hastily.

Let’s avoid waiting until the last minute like Dan Snyder. When he finally changed the name, almost no one was arguing to keep the name Redskins. If anything, the name change to the boring Washington Football Team meant that some fans could now root for their home team without shame.

Maybe that will be the case here at Fullerton, but we won’t know until we start talking.