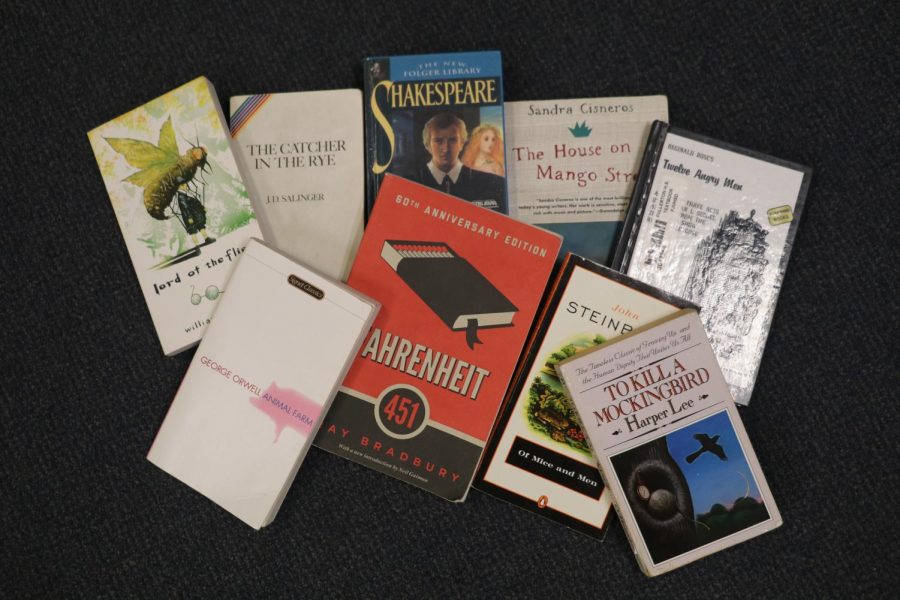 To Kill a Mockingbird, Of Mice and Men and Twelve Angry Men explore racism, but the authors are white. A group of FUHS students are concerned that the freshman and sophomore reading lists lack diversity. Photo by Arashk Alivandi.

Of Mice and Men. To Kill a Mockingbird. Fahrenheit 451. These novels address topics ranging from racism to addiction, but the one thing they have in common is that they are written by white authors.

A group of FUHS students has teamed up with students from Sunny Hills and Troy to examine the current reading lists in English classes throughout the district. The group’s goal is to encourage all schools to teach at least one culturally diverse book at every grade level.

“We didn’t just create this petition. It was created by Diversify our Narrative for the district before we even had any organizers,” Walton said.

The nationwide campaign started to gain traction last summer when Walton learned about the organization through the FUHS school club Junior State of America. Walton is co-district lead along with Noll. Their job is to coordinate meetings, help with recruitment, and participate in conversations with people who are interested in their pledge.

Reading lists for the six schools in the district vary, but the main concern for the FUHS students is that freshmen usually read Of Mice and Men, Romeo and Juliet and The Odyssey for their core literature. Sophomores are also mostly assigned works by white authors.

Initially the goal was to collect as many signatures as possible in the school district by pushing it through apps such as Instagram and Twitter.

“The goal was to get 400 signatures,” Noll said. “That’s what a lot of other schools had, and then bring it to the school board and district and try to enact it that way.”

When principal Laura Rubio and English department chair Michael Alvarez heard about the petition, they were a little surprised. Usually students will at least try to have a conversation with school officials about an issue before starting a petition.

Noll and Walton were pleased to find that there are many diverse choices on the reading lists, but they were surprised that English teachers are not required to choose culturally diverse works.

“[Alvarez and Rubio] were telling us that the recommended reading list at Fullerton was diverse and it had these books, but we were like, ‘this was not our personal experience during freshman and sophomore year,’” Noll said.

After meeting with the principal and department chair, the group members realized they needed to focus on doing more research rather than just focusing on gathering signatures.

Walton and Noll met with the Buena Park English department chair Tamara Rodriguez-Kam last week along with Buena Park senior Jessica Labrador to discuss next steps regarding the petition.

“I think [Rodriguez-Kam] was really supportive of [the petition],” Noll said. “Obviously from a teacher perspective I don’t think she wanted to bash her own curriculum per say but she was in support of Diversify our Narrative as a cause.”

According to outreach director Kenney Hetts, all members of the Diversify our Narrative team want to make sure that teachers’ opinions are made a priority.

“I really love this school and all the teachers here,” Hetts said. “In no way do we want to make them feel like their voices were not being heard because that’s kind of the whole point of what we are doing. We want people to be heard and to be seen.”

Hetts spearheads the pledge towards other students and parents. She was introduced to the group via an infographic Instagram post. A link to a google form was how she signed up to be an organizer.

Noll wants to make sure the petition does not negatively affect teachers or be seen as an attack but a positive way to gage community support.

“I want to emphasize I’ve really enjoyed my English classes, and I don’t want to discount how hard our teachers work or how much thought goes into preparing their classes,” Noll said. “However, there is always room for improvement, no matter what issue we’re talking about. I really believe in everything Diversify Our Narrative stands for and I believe everyone at the school will benefit from the cause.”

Alvarez, who teaches English 1, says many books are taught in school to teach specific standards for a grade level rather than teaching a book just for diversity purposes.

“I think that is a common reason why Of Mice and Men is so popular at the ninth grade level, it is a work that freshmen love. They really like the book; it’s short and they can handle it,” Alvarez said. “It has a lot of depth to it; you can analyze symbolism and characterization.”

Although teachers mainly focus on the concepts for teaching a book, Walton argues that teachers can teach diverse books as well as the concepts they previously taught.

“I would argue that curriculum is often not tied to specific books but to concepts,” Walton said. “With some research and reading, we can really find books that are usable in the classroom written by diverse authors.”

Walton appreciates the heavily diverse AP/IB curriculum for juniors and seniors. An array of different minority authors are represented in multiple books.

“When I look at [diverse] books I’m overjoyed,” Walton said. “I’m just so happy that we have representation in the books we read.”

The AP junior curriculum is dominated by a collection of diverse female authors. Works include Woman at Point Zero by Egyptian author Nawal El Saadawi and Persepolis by Iranian author Marjane Satrapi.

English 2 Honors teacher Kimberley Harris says she would be happy to rethink her reading list, but she needs more than a general request.

“I would like to see these students be more specific in their request for change,” Harris said. “Instead of just saying, ‘Be more diverse,’ bring me a specific book you’ve read. Tell me why specifically I should teach that book instead of let’s say The Catcher in the Rye or Animal Farm. Most of these student activists were in my class. They know what skills I taught them, so they can tell me what they think would be a better choice while still allowing me to teach key concepts.”

Harris also says that she asked AP Language teacher Leo Indelicato if he might want honors students to read some of the culturally diverse female authors their sophomore year instead of during their junior year, but some titles are taught junior year to meet the IB requirement.

“I would be happy to teach Woman at Point Zero and Persepolis but those satisfy a requirement for the IB program,” Harris said. “I can’t teach IB works sophomore year. IB officials only give English credit for what is taught during your junior and senior year.”

Alana Plick, an organizer for the group, didn’t notice the lack of inclusivity until she got older. “Now that I’m getting older I’m now realizing that I wasn’t reading as many books from a Black person’s perspective as I should be reading,” Plick said.

“I feel like for me, this is really personal because I myself am biracial, black and white,” Plick said.

As an organizer of the group, Plick spreads the word about their organization and asks people to sign petitions for more diverse books in the Fullerton district.

Arabella Varieur also joined after the organization started gaining attraction via Instagram and now plays a big role in spreading awareness about their organization online. Varieur is the Diversify Our Narrative team’s social media director. She is in charge of posting resources, book reviews, and various other petitions on the Instagram account.

Varieur’s dad is an English teacher which heavily influenced her opinion on having diverse books at school.

“He was supportive of it because one of the things he does in his classroom is that he likes to teach books that aren’t necessarily super popular among educators but that are diverse so each and every one of his students is represented,” Varieur said.

The Diversify Our Narrative team is currently focused on reaching out to people in the district rather than people online.

“A couple of weeks ago, we met with a group who is trying to do ethnic studies at the elementary and middle school level and we sent the link to them so hopefully they can have parents or prospective students sign the petition which I think could be another way to push it out that we are still working towards,” Noll said.

The team is unsure whether they’ll be able to foster change before they graduate but they are still hopeful.

“I think our school is really receptive to making adjustments and adding books to the reading list because our school definitely understands and is really amazing at wanting to support and help students and giving students a voice,” Walton said. “I really hope and I have good faith that we will make change. As a school community we are really supportive and diverse and our school of course is really open to hearing what we have to say regarding inclusivity.”