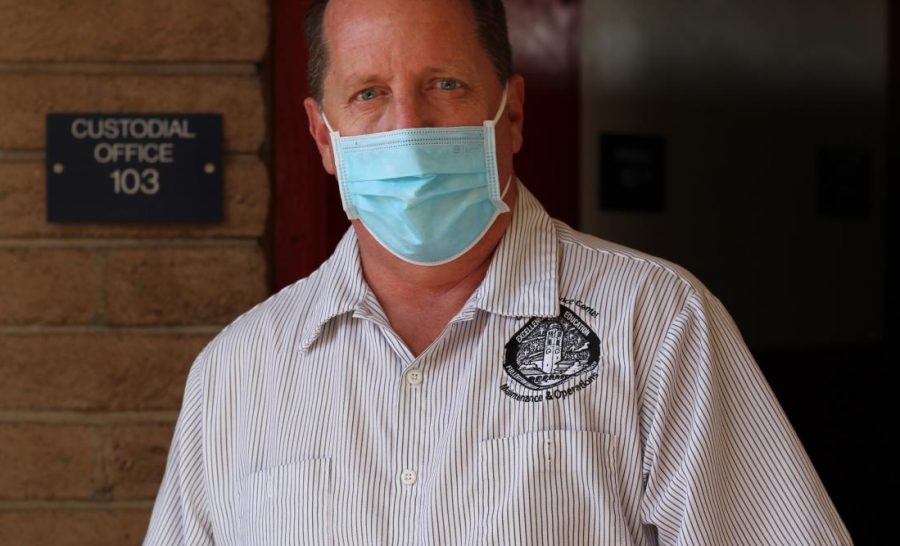 Lead custodian Jimmy Crouch was selected the 2021 Classified Employee of the Year. Photo by Katherine Martinez.

Jimmy Crouch personifies the “Indian For Life” motto. As an FUHS student, coach and lead custodian, Crouch has made the Fullerton campus a better place. For his dedication and hard work, Couch has earned the Classified Employee of the Year award.
Crouch grew up in Fullerton. During his high school career, he was a four-year letterman in wrestling and earned All League honors his junior and senior years. He set the record for fastest pin (11 seconds) against his La Habra opponent in 1989.
Crouch returned to the FUHS wrestling team six years later. He was the FUHS varsity wrestling coach from 1995-2005, earning a Coach of the Year award for one of those seasons.
Crouch worked as a substitute custodian 12 years ago at Sonora High School, then was hired full-time when there was a permanent opening in the district.
Principal Laura Rubio said she was very pleased when Crouch became the FUHS lead custodian two months ago.
“Since I became principal here back in November of 2017, he has been absolutely an amazing employee,” Rubio said. “He is always willing to help. He is very personable and very easy to work with.”

Crouch says he enjoys the physical work on campus: “I can’t stand being behind a desk or working on a computer so [custodial work] is the perfect fit for me.”
Crouch says the entire custodial crew makes his job as lead easier.
“Mr. Glen [McAninch] started when I graduated back in ‘89. He started out at FUHS and he’s come back recently. For being an older gentleman he’s probably the hardest worker I’ve seen. I strive to have his work ethic,” Crouch said. “Rigo [Macedo] has been my right-hand man during the day, whatever I need I can ask him for. He covers for me when I’m not able to do something.”
He calls the night staff the “backbone” of the custodial crew.
“Ernie [Fregoso], Alex [Soto], Ian [Brown], and Juan [Sanchez], they do all the heavy work and because no one sees them here, no one really appreciates what they do,” Crouch said. “You come in the morning and the rooms are clean and the campus is clean, it’s because of the night crew.”

Being promoted to lead custodian and working under COVID restrictions has meant big changes for Crouch. He admits he was quite nervous a year ago when the pandemic closed schools, but he says he’s feeling more comfortable as he’s learned more about the virus.
“I’m a frontline worker, so it was pretty scary at first,” said Crouch, who recently received his first dose of coronavirus vaccine.

Rubio appreciates the work he’s been doing during this pandemic.
“He never looks like he’s stressed out even though, especially during the pandemic, he’s probably the busiest man on campus,” Rubio said.
Crouch says he loves working with FUHS staff.
“Everyone is super friendly, from the coaches to the teachers,” he said. “I’ve worked in everyone’s classroom at one point or the other and I got to make personal connections with all of them.”
Crouch enjoyed working with student athletes when he was equipment manager before becoming lead custodian.
“Most kids here are very well behaved,” he said. “They’re willing to help out. If I ask someone to do something for me or if they could give me a hand or pick something up, they’ll do it right away and don’t give me attitude. The students here are great.”
In fact, he misses not having more students on campus.
“We really miss the kids here, I know all the staff does,” Crouch said. “I just can’t wait for the schools to open up and have a full campus again.”