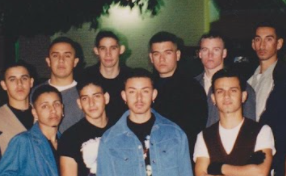 Do we need an anti-gang dress code?

Articles of clothing related to a group or gang and/or which, in the judgment of the principal/designee, may provoke others to violence, disrupt school operations, or intimidate students and staff; items include, but are not limited to:

Having won multiple national titles, Cal State Fullerton’s Division I baseball team is at the top of the university’s bragging rights. But if you’re a Titans fan, you’re not supposed to wear their hat because some gang members from Fullerton Tokers Town (FTT) wear hats with the letter F.

Your Boston Red Sox hat is out, too, because the cap with the letter B might represent the Baker Street Gang in Fullerton. Can’t wear any numbers either because, according to Fullerton Police Sgt. Perry Thayer, some numbers correspond to a block associated with a gang’s territory.

The Tribe Tribune staff wanted to learn if these guidelines were truly necessary and if any of the dress code elements were outdated. Our reporters interviewed three police officers: FUHS student resource officer Eric Carillo, officer Gene Valencia (substitute SRO), and Sgt. Perry Thayer from the Fullerton Police Department.

SRO Carillo says that a loose dress code could lead to problems.

“I feel where you guys are coming from, I do. When I was in school I thought the dress code was silly, but it all goes back to how [school officials] are doing it for a reason. Their main goal might be something you guys can’t comprehend,” Carillo said. “We don’t want certain students to say, ‘oh well, the jocks are wearing hats, why do you allow them to do that and not us?’ It would be a whole issue later on so we make it a rule for everyone.”

It’s just not a hat they’re wearing. It could be tattoos that they have, people they are associating with, activities they are participating in or that they have participated in the past that we have documented. It’s more to it than the things that they wear.”

Although each police officer recognized the students’ need for self expression, they ultimately said that it’s just easier to keep a blanket dress code that prohibits all hats and any clothing that might appear to be gang affiliated.

“There’s a certain subset of people that will ruin it for everybody else, if that makes any sense. So I get where it can be discriminatory but I don’t think that’s the purpose behind it,” Valencia said. “It’s hard to enforce for some versus the others. You gotta be fair. And, I mean, I don’t think there’s any type of bias, it’s just, what is common.”

“I think people should wear what they want, what represents them, what they enjoy, what they feel looks good,” Valencia said. “But you’re on a school campus. You’re here to do work, it’s your place of business, essentially.”

Police officials say that strict dress codes have helped suppress gang activity on high school campuses and that loosening dress codes could open the campus to problems as some students might try to “rep” a gang even if the student is not officially attached to the gang.

Sgt. Thayer, who’s been on the force for 16 years, said that officers use communication to suppress neighborhood gang activity. In other words, instead of just assuming that a hispanic kid in baggy clothing is a gang member, the police actually talk to the person. Thayer said several factors are considered to determine if a person is affiliated with a gang.

“It’s just not a hat they’re wearing,” Thayer said. “It could be tattoos that they have, people they are associating with, activities they are participating in or that they have participated in the past that we have documented. It’s more to it than the things that they wear.”

Thayer says, on the one hand, he thinks the dress code keeps students safe; on the other hand, he doesn’t see a problem with wearing a baseball hat at school.

“It’s not just that you have a hat with an F on it, but it’s somebody who gets in trouble often or somebody that associates with people that claim to be gang members or you yourself claim to be a gang member,” Thayer said.

Thayer says dressing a certain way can be used as a weapon to intimidate people. For those who dismiss his concerns, he says, “I think maybe they haven’t really been the victim of intimidation by gang members.”

“But I certainly wouldn’t want my child to have to walk by a group of kids that maybe are gang members and they’re dressed out like gang members because you know that’s going to make certain kids uncomfortable,” Thayer said. “I think you have to balance the right to freedom of expression for students and on the other hand, also the right not to be intimidated. So I would be more inclined to just keep things how they are.”

Students should be treated with respect

Reading the school dress code made me do a double-take.

Prohibited items include “shorts worn below the knee with socks up to the pant line” and “dramatically oversized button-down shirts, white t-shirts, or polo shirts that have been modified with ironed-on creases or pleats on the front or back.”

Wait a minute. What?

90’s Latino and African American hip-hop culture was all about baggy clothes, long white socks, with your chain and bandana. My dad’s whole friend group each had their own initialized belt buckles. They might have gotten in trouble a few times because of tagging, but they were by no means gangsters.

Basically my own father would have a dress code violation if he were to walk on campus.

Bottom line is that the language of the current dress code is undeniably discriminatory towards people of color. But I was surprised that the school didn’t try to tip-toe around it. They just flat out insinuate that if you wear these kinds of clothes, you are prone to violence.

Over the years, police officers have helped the school create a list of stuff that might be gang related. In the 1980s and 1990s, clothing with Raiders, Kings or Dodgers logos were banned. Today police officials claim that a “blanket” policy is better so students don’t feel discriminated against. Instead of saying you can’t wear Raiders, they just say, “No hats.”

Although I appreciate that the police are trying to keep us safe, students deserve better. I know that a Ban Everything policy is easier to enforce, but a Ban Everything policy isn’t fair, especially when the dress code specifically targets the culture of students who comprise 65% of our school. Students have a right to wear clothing that reflects who they are. And if wearing clothing from their own fathers’ closets makes them happy, they should be allowed to do just that.

Some argue, however, that we really do need to protect ourselves from gangs. True. But even the police officers we spoke to admit that they don’t assume someone is a gang member just because they are wearing baggy clothes and long socks. Sgt. Perry Thayer from the Fullerton Police Department said he needs concrete evidence to classify someone as a gang member and it has to be “more than just a hunch.”

“If the person in question is associating with thoroughly documented gang members and he’s dressed like them, chances are this person is either a gang member or is attempting to join a gang,” Thayer said. “However, if it’s just some kid who thinks it’s cool to dress like that and he has no gang ties at all then we’ll investigate. When we talk to this person and ask the right questions and we see that they’re not gang members then we don’t document them as one.”

If the police take time to actually talk to people, why aren’t the school officials giving students the benefit of the doubt, too? Instead of trying to control every teen fashion choice, the adults need to get to know—really know—the students. Who are their parents? What are their goals? Do they need any help?

I understand that the school officials are scared. They think if they relax the dress code, absolute chaos will erupt. Students will start fighting. The quad will be a war zone.

However, times have changed.

“I think that those specific dress codes are connected to thoughts about criminality, which is related to youth of color, historically. I just think it seems a little dated,” Nuñez said. “It seems like these details like baggy and saggy pants are so mainstream. I was sitting down with my very fashionable nephew who’s in high school and I asked him if there are any particular groups of people at school who wear baggy pants at school and he said that everybody wears baggy pants.”

If school officials eliminate much of the so-called gang-related language from the dress code, it would send a message to hispanic students that they respect them. I’m not saying that everyone will be an angel, but it isn’t fair if 1% of the student body dictates what the other 99% can wear. Give us a chance. Having a student wear long white socks with shorts isn’t a crime. If people start going wild then change it back. But if the school puts in place stricter policies, the most important thing is to explain why we need the restrictions.

With all these interviews with police and school officials, the thing that bothered me most was the condescending attitude. Being repeatedly told that things were bigger than me was extremely frustrating, especially when the whole reason we were talking to them was to learn the reasons behind the dress code. They’re targeting our bodies and what we wear and we have a right to know why. Someone needs to explain to students why “bandanas” and “chains” are seen as “provoking violence” and “disrupting school operations”.